Callum Brown – Son of a GUN

Callum is the son of Magpie Champion Gavin Brown.

A 3 time club champion, former Captain & premiership player Gavin is one of the most courageous players to have ever stepped onto an AFL field. Gavin was fierce & determined & a hell of a footballer.

In the 1990 Grand Final one of the biggest brawls ever seen on a footy field broke out at quarter time. Terry Daniher saw Gavin Brown as the biggest threat to a Bombers victory & decided to take him out of the game. Moments later Brown lay unconscious on the MCG turf & was stretchered off the field. Daniher copped 12 weeks for the thug act. 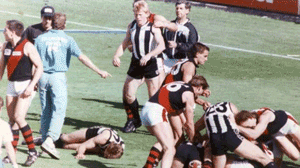 Incredibly the tough bugger returned to the field in the 3rd quarter & kicked 2 goals to help his team to a famous drought breaking victory.

They say the apple doesn’t fall far from the tree.

The resilience & determination that Gavin possessed has been passed directly onto his son Callum.

When Callum Brown was 15 he was cut from the Oakleigh Chargers squad. At 168 cms & 62kgs he was only a little bloke & told he was too small to make it. The following year, he went back to see if he could make the list at the Chargers. They didn’t even rank him in the top 100 players in the area & cast him aside.

But Callum believed he was good enough & didn’t listen to any negativity. Instead of giving up on his dream he moved zones & tried out for the Eastern Ranges. Despite his size they decided to give him a chance citing that how clean he was below his knees was the elite of the elite.

Callum just kept going from strength to strength as soon as he started with the Ranges (My TAC team many years ago).  His rapid improvement & determination landed him in the Vic Metro team for the under 18’s National Championships & starred averaging 19 disposals at 76%DE. He made the All Australian team. He then rocketed from rookie list prospect to possible first round selection.

The Pies wanted Callum Brown & Josh Daicos. They had stuff all draft currency after getting Treloar. The only way they could get the draft points was to cash someone in. That man was Jarrod Witts.

Since his knockback as a 15 year old Callum has added 10 cms to his height & 10kgs to his frame.

Brown is not an athlete & not noted for any real speed, but it is improving. What he is, is just like his old man. A super determined tough driven natural footballer.

The only draftee that I was thought could see some early game time was McLarty (out of necessity). He’s a key defender & based on stocks that should be good enough to get a game. But he’s coming back from surgery & won’t have much of a preseason. Brown however has been awesome.

I knew the Pies were really happy with his preseason & rapid progress. But a recent 3 hour full match simulation took his round 1 chance to another level. He was a standout. In good news for Pies rookie priced selections the other standout was Scharenberg.

Brown comes with the extremely valuable DPP & he’s cheap. Dirt cheap. He can also win plenty of the pill in contested situations. But his role in your team if he plays is a cash cow. And he might be a decent one. Whether or not he’s viable for an F6 role remains to be seen. If Brown plays the only role I can see for him is in the guts. The Pies are well stocked for small forwards. Think Elliott, Hoskin Elliott, Fasolo, Boof Head Mayne, Josh Thomas & Ben Crocker. I think Levi Greenwood will be very nervous about the preseason Brown is having. He might kick Levi to the curb sooner rather than later.

He’s still not a big bloke & never will be. He’s only 18 like all TAC cup graduates he might get dropped or injured. And Buckley the genius he is might ask Darcy Moore to pay further up the field & play him at Full Forward. Well he’s a long way ahead of where I thought he’d be. After he was drafted I thought he’d be a late season, get a few games into him option. But that’s not the case. He’s flying & pushing his case for early game time.

Whilst the Pies are deficient in defence, the forward Line & Coaching, the midfield is by far the greatest strength. Some very good players & plenty of depth. Can Callum Brown break his way in?

I wouldn’t bet against it