It’s almost here, the start of the 2022 season is upon us, so it’s time for the annual team review. The SloaneRangers have been through a heavy pre-season workload, but we’ve come out with the best 22 set and ready to put some points on the board this year.

I’ve decided to go a bit heavier in defense to start the year with 4 premo selections. I’m not super confident in the cheaper options available to start with, so I have put more money into my backline so I’m less reliant on hitting the lottery with a midprice or rookie selection like a Wayne Milera or Heath Chapman. Tom Stewart is just uber consistent, he won’t pump out the 130+ scores, but he also traditionally won’t bomb out and score below 80 either (he scored below 90 in just 3 games last year). He’s not going to be a guy I consider weekly for a VC/C  tag, so him not being able to hit a big score (only 3 games above 125 last year) doesn’t concern me too much because I’m picking him to be a consistent source of points most weeks.

Short has just been at the ball like a pig in during the pre-season and looks to have a nice source of consistent scoring with kick-in duties, Short had 9 with 6 play ons against the Hawks in the PS game, there’s an easy source of 20-30 points each game for Short doing very little. Harris Andrews is a bit of a POD selection, however if he can replicate his final 7-8 weeks of 2021 over an entire season he can be a top 8 selection. Also… 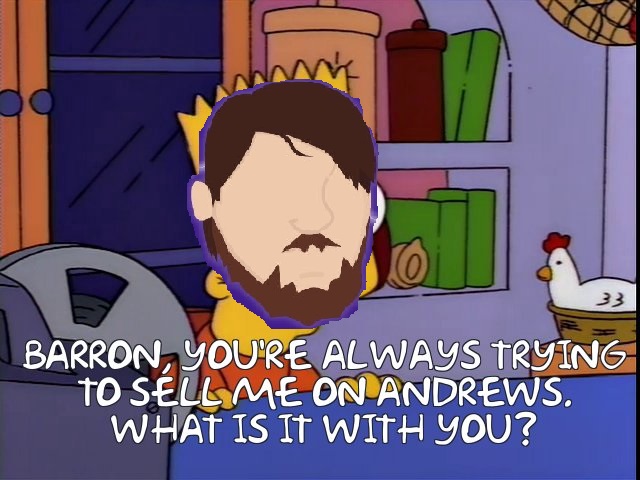 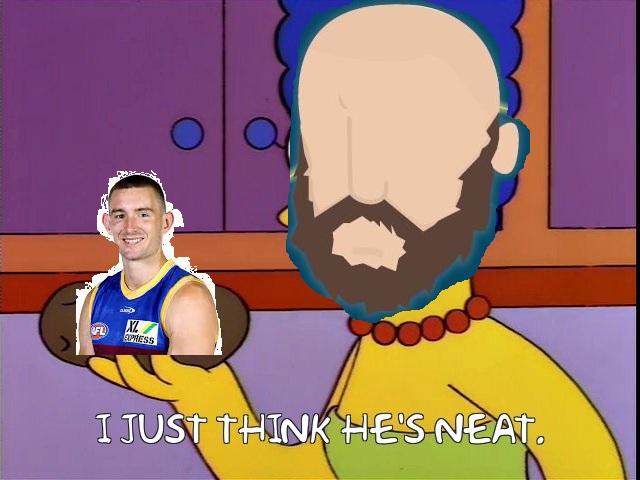 Whitfield has been a great selection in the past and had his injury issues last year, so should be back to his best for 2022. The rest of my defence will be made up of whoever gets named in Round 1.

Marcae, Miller and Oliver are no-brainer selections, it’s just been a matter of if I added another uber-premo to go along with them or not. I’ve settled on Neale as my M4, who if he can replicate past form will be an uber-premo and then taking a chance on Matt Rowell as a midpricer who has premo potential. Even if he tops out at an average of 100-105 that’s enough that he’ll make some money and I can keep him in my side and upgrade other areas of my team first and leave him until last. I’m not super keen on the price of JHF, Daicos and Ward, but they look like the more standout rookie options with job security available, so I have selected all 3.

Here is one of the bigger pivots I’ve made from my usual style of team, rather than the Grawndy combo that seems to have been my usual for the past 2-3 years, Gritts gets the nod this time, adding in the mid-price Jarrod Witts in as my R2. This has allowed me to add the extra defender at D4, with the hope that Witts can get back to that 90+ range he averaged in 2019 and 2020 and be a solid player for most of the year I can upgrade if/when a Gawn or Darcy have a cold streak and bleed some cash.

Here is one of the bigger pivots I’ve made from my usual style of team, rather than the Grawndy combo that seems to have been my usual for the past 2-3 years, Gritts gets the nod this time, adding in the mid-price Jarrod Witts in as my R2. This has allowed me to add the extra defender at D4, with the hope that Witts can get back to that 90+ range he averaged in 2019 and 2020 and be a solid player for most of the year I can upgrade if/when a Gawn or Darcy have a cold streak and bleed some cash.

The new rules surrounding dual position eligibility being added have seen me go really heavy on mid-pricers up forward and go with more a “wait and see” approach on some Dunkley type players gaining forward eligibility. Speaking of, Dunkley is in a very deep Bulldogs side, but should still score fine, while there’s the obvious risks in Butters not getting the midfield minutes he’s been promised, but Port are also at the point where they may have to try something new if they want to get a step further and make a Grand Final this year. Adding Butters to the midfield is just the type of move they look like they’re planning. F3-F6 are all sitting in that $180K-$260K range. With a bit of luck one or two of them will be keepers, or close to season long keepers, but the hope is they score enough to the point they can make $150K or so and then I can pick off some newly eligible players, or ones who’ve hit a bit of a cold streak and can be bought for unders. I’m not uber excited about picking McGovern, but he’s priced at a reasonable level and has a clear role to score points. It’s just a matter of staying injury free and playing to his potential (…oh no!). He’s one I’ll hope can make some cash early and then jump off him the first chance I get.

I’ve held on to a strategic cash reserve at the moment due to the uncertainty surrounding rookies and who will play. I may be forced to upgrade those normal $123K priced rookies we select to ones who may be in the $180K range, which means if I want to keep my current team I’ll potentially need some extra cash to make these moves. If that’s not required then I have some money to use for my first upgrade. It’ll get used one way or the other. 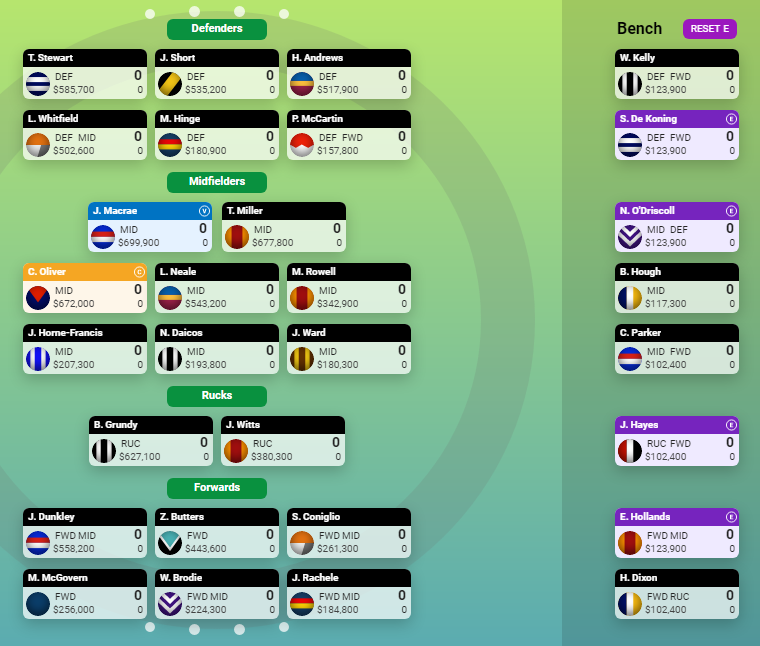 And that’s my side for 2022! As usual there will be changes around the fringes depending on who gets named for Round 1, but the majority of my team is now locked into place from here.

Witts is the big call. He smashed it on Monday, but has NicNat and Gawn to start, who he has traditionally scored 70 odd against. Not a big issue if you’re keeping him til deep in the comp, but you’ll need to make up those 100 points elsewhere. Whitfield over a rookie might get you close.

I should add I’m still completely unsure about who to accompany Grundy. Gawn is there for now but I’m itching to pull a Witts type move.

It’s definitely not an instant returns thing I’m looking for on Witts. I’ve worked it out and he can bare 3-4 scores in the 70’s and still get close to the $500K mark by the bye rounds as long as he has a couple of 100’s scores in there. Based on his career average VS certain teams he’ll play in the first half of the year that’s definitely do-able.

He must’ve had a lot of hitouts to advantage cause he only had 7 disposals for 97 from 54% gametime. 1 mark and no tackles.

If Suns are to be better this year, they need Witts playing well

even before SC opened Witts was in my team. I was hoping he would have been a bit cheaper, but apparently there is a formula.

then I heard he was still struggling to be read for round 1, and I realised he hasn’t had the full 12 months after his ACL. Havnt considered him again.

what about now after he almost scored a hundred in just over a half?

A well balanced team you have there Barron. Going with the value pick at R2 sure helps the rest of the side. I went with Grawndy in the rucks, so my backline is the one to suffer, my mids and fwd line are about the same as yours, just one different player on field in each line.