The Fremantle Football Club is coming off what could be one of the best drafts in the clubs recent history. Managing to obtain Neil Erasmus ($166,800 MID) and Matthew Johnson ($117,300 MID) is an absolute win for the Dockers, and could quite possibly take over the reigns Fyfe and Mundy eventually leave behind, and the hole already available from Adam Cerra’s departure. The acquisition of Will Brodie ($224,300 MID/FWD) from Gold Coast Suns will offset the loss of Adam Cerra, too.

Luke Ryan ($540,300 DEF) poses an interesting debate with Hayden Young ($418,400 DEF), Heath Chapman ($275,200 DEF) and now Jordan Clark ($338,200 MID) at the club, Ryan may resume his role as a lockdown-ish key-ish defender with the aforementioned three taking the rebound and playmaking role off him, but until we get more clarity on what the Dockers now stacked defence will look like for 2022, it’s hard to put faith in anyone. At least for now. However, Young does have the capabilities to breakout and showed late in the season with an average of 89.6 over the final five games (three scores of 94 or better) what kind of player he could be.

And we still have no idea what the Forward line will look like or how it may function now that highly rated assistant Jaymie Graham is now in charge.

First it was the Breakout, now it’s time for the young Dockers midfielder to cement himself as SuperCoach royalty. Averaged 107.3 for the year, and 117.1 after the Dockers bye. He’ll have a huge role in that midfield with Nat Fyfe battling to get back after his shoulder mishap and David Mundy ($542,300 MID) aging. I think he will form a formidable partnership with Caleb Serong and the other midfielders the Fremantle Football Club have brought into the building.

As long as the man affectionately known as “Hodor” can stay fit, he could give Grundy and Gawn a run for their money as top ruckmen in 2022. Averaged 118 in 2021, with only 3 scores below 90 for the season. I’ve kind of cheated putting him in the breakout category, but I think he’ll breakout as a lockable asset. The breakout is largely completed from a performance point of view.

For similar reasons mentioned for Brayshaw, Caleb Serong could have a massive year next to Andy in that Dockers’ midfield. Had a slow start in 2021 in SuperCoach terms, but averaged 92.6 after the Dockers bye. He’d need to add about 10-15 points onto that to late average to be a viable selection but he may be one we consider as a finishing touch to our teams late in the season

I could’ve gone with either of the midfielders Dockers’ selected at the most recent draft, or the perennial rookie tease in Luke Valente ($123,900 MID), but “Noddy” has come back in ripping shape for the Dockers. Looks visibly stronger, fitter and may force himself ahead of Erasmus and Johnson in the pecking order to begin the season. Has the ability to play tall and small in defence, and can also tackle his way to massive numbers through the middle. Probably starts plying his trade through the middle or on the wing, but it will be part of a rotation and he could find himself starting in various positions throughout a game.

My goodness me, I never thought in a million years I’d be putting this beautiful man in this category but with his shoulder issues in the off-season and the fact that he’s lost a bit of his muscle, he could be one that takes more an outside role upon return to the line-up. He was quite athletic and wonderfully so in his early years at Fremantle so perhaps a slim down will be good for him, but as for his fitness he’s coming from a long way back.

Great list! Cant wait for this season, as fairly new player, I very much rely on list like such above, so i appreciate it a lot and i’m sure others feel the same way, quick question, what is your opinion on having Brayshaw and Serong together on a team? I cant pick between them

I really don’t see why not!

Great stuff thanks Damo, plenty of interesting options at Freo this year, I’d love to start Hodor but don’t know if I have the stones, hopefully we see O’Driscoll and Erasmus in the pre-season hitouts, cheers mate.

I can’t pick Hodor, nothing can make me

Yeah you’re probably right, he still needs to prove his consistency, you going for any bargain Rucks this year Derek?

The good old days when Fyfe was my first picked

Fyfe shoulder. It has an off and on season. Shame. The Crows have been a team that have been hitting the draft hard the past few years, that method was changed up somewhat at the end of the 2021 season, with Adelaide bundling up 6 Read more… 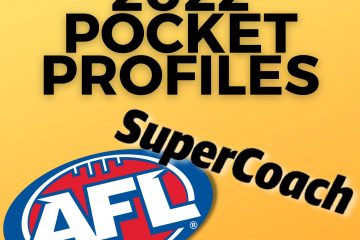 Introducing Grady! This beautiful member of our community has stepped up for us and written this great GWS Giants pocket profile for us. Thank him in the comments, make him feel welcome. Much like the Read more…