Tuesday night footy and the AFL have obviously decided to roll out the big gu… wait, no, first up we’ve got Adelaide playing half a GWS side and then the Carlton Auskick team will facing off against the unchanged Sydney lineup from 5-days ago. Nonetheless, footy is footy so let’s jump in!

Tom De Koning will lead the ruck for Blues with Marc Pittonet being managed. Joining Pitto on the outs list are Paddy Dow, Eddie, and Cam Polson. Lachie Plowman and David Cuningham come in, and there’s a debut for the 123.9k forward, Matthew Owies. Sydney are unchanged.

Midfielders against Adelaide? Sign me up! Whitfield and Coniglio could go big here. If you’re in a ‘break glass in case of emergency’ situation this week, Matt Crouch has a 3-week average of 142 and Jake Lloyd’s is 137 over the same period. Patrick Cripps is in a bit of a funk this year, he enjoys playing against the Swans though, recording 157 and 115 in his two games against them last year. Reilly O’Brien is also a sneaky option for owners. He’ll do as he pleases against Sinclair and is coming off 141 last week against the Hawks

Former basketballer alert! Matthew Owies makes his debut tonight. Despite standing at 6-foot he’s described as a goal sneak. Priced at 123.9k I reckon he’s just a fill-in for Betts so just wait and see if he is named again next week before considering.

Who would you all pick out of Ridley, Blicavs, Saad and Short? Also considering Cerra but that would mean 6 players from dogs and freo in round 18.

Mitch is Back
Guest
Reply to  tommyc99

Blicavs for me, just ahead of Short and Ridley

Ridley, Blicavs, Saad, Short is the order I have them!

If Brisbane kick as many points tomorrow as they have the last few weeks, Lukosious will get 60 points from kick ins alone. Seriously.

This is a pretty good call for tonight’s game.

For the rest of the season, I’d back Greenwood

In a Draft League elimination final. I can drop Setterfield & Swallow to grab Ross (92) & English (132) off the bench

Most draft leagues only allow ONE player off the bench.

Mitch is Back
Guest

Looking to upgrade Brayshaw (Melb) before round 17, can go anyone. Already have Neale, Titch, Boak, Duncan, Cripps, Coniglio and Viney in the mids.

Thinking Macrae, ahead of Oliver and Fyfe, appreciate your thoughts.

cash_cows
Member
Reply to  Mitch is Back

In that same order for me Mitch

Derek
Guest
Reply to  Mitch is Back

You want to get someone who is still a chance for top 8.

If you’re after a POD, have a think about Dunkley

I’d argue ROB will find it tough rucking against Sinclair as well Jacobs if he’s playing both games tonight haha. Just kidding Kev, cheers for the write up xx

Comment missed on other thread.
Captain choice.
Whitfield vs crows or Lyons vs gcs?

The Ranger
Guest
Reply to  cash_cows

Any news on Zac Williams?

Cheers if anyone has the new price for Simpkin and Dunkley?

By some miracle all may not be lost afterall.
Thought i would get simpkins and mozzies score but as best 18 they may just drop out. Have 21 playing including those two.

So Whaddya reckon for capt?
As this will be the key most likely.

I like Lloyd against the blues, they tend to bomb it in which means more marks and easy touches for the seagull

Leave it on Jack! He did ok!

Hi Community what are your thoughts for best captaincy option out of Jake Lloyd, Luke Parker or Jarrod Lyons who I will bring in for Dusty tomorrow. Am currently torn between Lloyd and Lyons at present. Thoughts?

Sorry Pman a bit late to respond now but I would’ve said Lloyd then Lyons, both killing it lately.

No probs Russty and are pretty happy so far as went with Lloyd who had 79 to half time. Will bring Lyons in for Dusty tomorrow and also considering Rankine to H Greenwood.

Might be easier to respond on this page to everyone instead of yesterday’s. SC has been a bit of a monopoly this year. Still was logging in to change my sides on the computer each week which didn’t really help me. Not sure what your complaining about Derek, your having a fantastic year. Plus it’s probably been good not having a smart phone for the last few weeks Trigga as I probably would have smashed it against a wall watching Carlton’s last 2 performances. Will probably make my last mid upgrade next round which might hopefully push my rank up. John, my goal is always trying to push the top 5000 so will keep pushing although probably too far behind now😒

Cheers Holty. Chased points early with a big focus of getting rookies off the field, and trading out any premiums if they missed even one game. Was down in the 200’s but rank slipping a bit now but hopeful of a top 500 finish.

There are some good teams left in the JR SURVIVOR League, going to be a big finish coming up there

Urrggh. I was dopey enough to believe the stories about cripps being a top 30 midfielder at a cheap price. Dumb move I would have been better off trading in a player who has the bye. Most over rated player in the comp

He’s goin alright Dave, 38 points with 2.5 quarters to go..fingers crossed for ya

Yeah the Champion Data Bangalore stats team often give him the points when they can’t identify the actual player. Umps are looking after him well, that goal came from an obvious free to his opponent. I’d never watched him play until I got him in, don’t understand the hype he is a very ordinary footballer.
Jack Martin responsible for getting Carlton back in the game but he scores nothing while Uluru gets 50 points for a dubious free that gets a goal

I just checked fanfooty stats Uluru is at 100% DE WTF?
Are handballs over your head to opposition and kicks backwards to open space considered effective/ perfect?
No wonder I never win supercoach I watch players for their influence on the game and rate them accordingly. CD seem to award points randomly between a select few depending on how much the commentators love them.

I’d like to see how Cripps goes at a stronger club, he was carrying the midfield for so long there he’s probably bloody sick of it by now, sick of losing so many games..Walsh has stepped up to take some responsibility off him now but maybe he’s just wishing he was somewhere else.

I watched the game, thought Cripps effort in 3rd quarter Won them the game. Walsh finished it off.

I got Cripps After round 8 for under $490k. Been very happy with him. Averaging about 115 since then

Cripps’ knickname should be Uluru. He’s just as fast, has equal disposal skills and reads the game just as well.

Jordan Dawson! He is starting to pinch chippies of the seagull Lloyd. About time.

Just in time for me to call for his breakout again next year and get burnt by him :’D 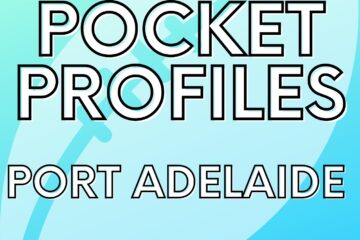