Unthinkable. Unfathomable. Completely lacking in logic. And no I’m not talking about the “Festival of Fantasy” currently sweeping the nation. I’m talking about our very own PatchtotheMax suddenly being Very Good at SuperCoach (??)

149th. One hundred and forty ninth. Madness. The same guy whose bio confesses that he is awful at SuperCoach is somehow ranked 149th in the land. The end is not in site to this god awful year until that ranking reaches six figures. Order will not be restored until the group chat whipping boy is once again Very Bad at SuperCoach. Have I used the entire intro to express my disbelief at Patch’s apparent goodness? Yes. But no pressure, Patchy ex oh.

Newz you can Uze

We’ve got confirmed teams and games that have already been played. It feels like my whole world has been turned upside down, black is east, up is white. Round 9 will finish Sunday night after Freo v Pies and round 10 will start the next day with Port v Dogs. Try to keep your trades sensible because team news will be drip fed to us throughout the week. But I’m getting ahead of myself, tonight…

… Mitch McGovern has saved the axe falling on him by pinging his hamstring. Harry McKay is his replacement. Keegan Brooksby is one and done at the Hawks in one of four changes. Jarman Impey, Luke Breust, Jono Ceglar, and Tim O’Brien all return from various injuries and ailments. There’s a total of 10 changes between the Bombers and the Lions. BZT is back for the Dons and there’s a debut for Sam Draper. Dylan Shiel also returns from suspension. Mitch Hibberd is out though in a blow to our midfield bench and Conor McKenna is being managed. At the Lions, Archie Smith joins Stefan Martin on the sidelines, forgotten defender Alex Witherden is in for the injured Daniel Rich, and there’s a debut for Connor Ballenden after he’d made the extended squad for the last few rounds.

Teams for the remaining round nine matches will be released at 6.20pm AEST the day before they kick off

The Breakeven section will get a rest for the next few weeks. Type “SuperCoach Breakevens footywire” into Google if you want to see who is due for a rise/fall over the coming frounds.

Smooth Kevy’s Lock of the Week

In 1% of teams and a 3-round average of 128 (114 for the season) Touk Miller is a tasty differential for your midfield. Still only 570k, Touk plays his next 3 games at Metricon Stadium, a venue he is averaging 117 at so far this year with a low of 98 snd a high of 140. He is ranked 9th in the comp for contested possessions, which pairs well with his overall disposal efficiency (71%), 4 clearances, and almost 5 tackles a game.

Made my trades relying on Doedee playing! Now I only have $20k in the bank for an upgrade. Best option for Doedee:

A) Doedee to Stewart
B) Doedee to Hurn (not a big fan of this due to the bye)
C) Hold Doedee. King to Watson. Swing Hill forward to loop Aarts

Yeah just read on AFL website he won’t be playing this week. I’d say if you were planning on getting Stewart at all just grab him this week. Otherwise don’t mind option 3 mate, means less points on field this week though

Doedee not playing this week, just precautionary but should be 100% right to play Melbourne

Trade or hold Walters? Bye next week so will miss 2 weeks minimum do have cover in budarick. I’d likely trade Walters to Neale via dpp

I’d be wanting to hold Walters personally as he’s definitely a top 6 fwd, but to get Neale in especially if you’re gonna throw the captaincy on him is a great move

two weeks is a long time this year to have so much cash on bench. extra trades, this is what they are for.

I do agree, though will personally be holding as unless you traded him to Petracca or an Essendon / Melbourne Mid yesterday any other player will still have a bye to come and will also miss.

As we still do not who exactly who is having byes when I almost like the certainty of knowing he has had his bye and will be fresh off a two week rest to hopefully continue tearing it up.

Thoughts on Doedee trade to Brodie Smith ?- same price, named captain ,with Crouch out should get some time in the Mids ?

Doc has turned into a complete and utter Spud since he scored 185 and hasn't passed 90 in the 5 weeks since.

I'd hang on JDJ, surely you have bigger probs than trading a premo out.

Smith out was a good trade now John :), I guess this year you could afford to trade out of formers for hot players but I'd still keep Doch cause he can go big.

Have to field one of Budarick, Close or E. Taylor this week. Which one would you guys choose? Don’t love any of their match ups

Cheers DJ, I wish I had a way to loophole them but I don’t so will go with Budarick. Bloody Dev Smith actually starting to play footy again the week I trade him out haha

Who's got the best JS out of Elijah Taylor, James Bell or Matt Ling? Any Swans supporters (or anyone) able to shed some light?

Now as a Cripp’s owner and a Carlton supporter, I love the bloke but when you cough up the ball twice in the second quarter (which should of resulted in goals) and the opposition score goals as a result of the mistakes, how does he score 26 points in the 2nd from only 3 touches?

I think it's because he's a good looking man Holty…lol
Makes as much sense as the scoring system this year.

Yeah Jugs what the effing F?…LOL, I'll take it though

To be honest he’s probably been there best

McGrath's become a pretty good player, he just doesn't have enough support in that team.

Draper's had a decent game for a rook ruck, gave it a pretty good crack.

McInerney and Ballenden are hardly first class ruckmen. But still might be a worth wild R3

God Dayum! All 5 of my 5 premos in my midfield going big! Dusty, Macrae, Cripps, Mitchell and Neale (thats captain Neale to you). Pickett getting over 100 as well.

Shame I am facing a 0 on field with Doedee out, hill and rivers on my defence bench and no trades left for this week. I'm on track for over 2500 minus whatever doedee may have scored. 1575 with 10 players to go.

Which two out of Rankine, Close, D Cameron, or Curtis Taylor should I put on the field in my forward line. At the moment I have Rankine and Cameron.

Id go with that too.

Any love for Sam Menegola?

Looks in ripping form now Westy, could be a great pod.

WTF has happened to Simpkin the last 3 weeks?…what a spud he's turning into, a bloody liability…. so disappointing.

Well he was literally injured 3 weeks ago, and last week he copped a hard Curnow tag and was maybe still not quite 100% yet. This week, no excuses, maybe the wind has been taken out of his sails a bit though. He'll turn it around and get back to how he was before, but…he'll drop low enough that everyone who didn't have him is now gonna get him so cheap ffs.

Cheers Magic…yeah and in the meantime we lose our good potential scores for crap ones lol, and lose league games, oh well, hoping he bounces back.

Thanks mate, pretty happy with how they're going this season, Zac Jones has been good and Steele is probs our best now, don't really need broken down Hannebery, Maxy King is coming along nicely too.

Sam Simpson or Close? Who to field?

Maybe Simpson cause Close might depend on goals for points

Give Budda a run mate I reckon, you gotta back up your advice, whether it be wrong or right, he could surprise you and get a 60 or so lol

Must be a down week for you John.. I remember you having more wins than losses most weeks so far, good week next week to improve our sides with some real bargains around. 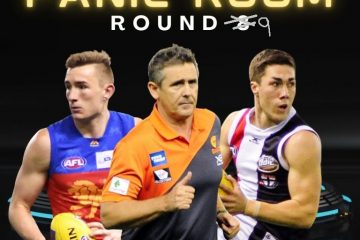 My god, it’s happening. Everyone stay calm. STAY F**KING CALM! EVERYONE JUST CALM THE F**K DOWN! Now that I’ve got my Office quote in for the day, let’s get into the panic together. No time Read more… This is a sad time to be a dedicated SuperCoach coach. There is carnage in every line, players dropping like flies and there just isn’t enough trade boosts you can have to fix all the Read more… G’day all, Lekdog here in the drivers seat, this post will be updated as the weekend progresses! Newz you can Uze Thursday Port Adelaide v Melbourne Trent Dumont and Toby Bedford will be the subs. Read more…