Hello everyone and welcome to Part 2 of our search for the potential fallen premiums. Last week we did some experimenting with Rory Laird, Brody Grundy and Max Gawn, this week we’ll be putting Lachie Whitfield, Dusty Martin and Patrick Cripps under the microscope to see what we can find.

For those of you who missed it, Part 1 can be found here https://www.jockreynolds.com.au/2020/01/29/finding-fallen-premos/

With all that out of the way, lets go and see what we can see, starting with Lachie Whitfield.

Lachie Whitfields scoring breakdown over the last 3 years does provide a good example of the growth of him as a player, with an increasing presence in 2018, with a hot finish that set him up superbly for his fantastic 2019 season. Ever since that hot end to 2018 he has stayed fairly consistent in his averages and hasn’t fallen below 100SCPoints since.

That leads to his price breakdown, which has generally stayed consistent through the years. He did have a slight fall in late 2019, but still didn’t fall below the $500K mark at all. The difference this year will be his starting price of $604,100, which will potentially put his early Breakeven in the 120 range. Averaging above 120SCPoints is entirely possible for Whitfield (he averaged 129.2 SCPoints over his first 4 last year), but all it will take is one poor scoring game early for him to lose a bit of price. That is not a situation unique to Whitfield though, that’s just the nature of the uber-premo priced players, but it is something to consider.

Even through his development as a player, Whitfield has stayed consistent in his points per $ value, providing range between $4700-$5100 for the majority of last year. That means even if you want to spend the big $ on him to start with you should still get good bang for your buck.

Next we’ll take a look at Dusty Martin.

Now this does provide something we would look for if we’re searching for fallen premiums. There are two periods that jump out to us, which is Round 9-16 in 2018 and Rounds 1-8 in 2019. Two periods where he’s had a significant downturn in form, which if we then go look at his price breakdown.

There we can see two big dips, 2018 he went from $656K down to a season low of $478K in Round 13, 2019 he started at $563K and fell to $488K by Round 8. The fantastic thing about this though is he bounced back both times, which is exactly what we want to happen if we picked him up as a fallen premo. If we go back and look at his price breakdown, we can see a pattern of Martin getting into a groove at the end of the year, the last 3 years his best scoring period has been in the Round 17-23 period, Dusty getting warmed up for some finals footy!

Over to his price breakdown

Dusty did have some periods where he was providing less than idea value for money last year, often hovering around the $5300-$5500 range, thanks to 9 sub 100 scores in his first 15 games, but he finished off strong when he scores improved to end the year.

Generally, Cripps has been a bit up and down in his scoring breakdown, which can be attributed to a few things, both of which make him difficult to predict. Firstly, he can belt up some HUGE scores if he gets going, 194SCPoints in Round 12 last year, 187 in Round 14 of 2018 as examples. On the other side, he’s also prone to the odd stinker, last year for example he had scores of 66, 89 and 78 in his Round 9-16 period.

Looking at his price breakdown, the problem becomes those big scores he can provide. Looking at him last year, he rose in price, but then the above slow period saw him drop to a season low of $542K by Round 11. He was probably looking like he was going to be cheap as chips in a few weeks, then he produced that 194 SCPoints as above, which immediately stabilized his price and sent his price moving back on up. The point is Cripps is so good as a Supercoach player that his ability to score will mean he can stop a price skid in its tracks with one good game, making him difficult to predict when his basement is. He has (and likely will) fall in price at some point due to one of those quiet games he occasionally has, the hard part is just predicting how low will he fall from it.

As for his points per $ breakdown, Cripps provides that in spades, spending from Round 8 last year around the $4700-$4900 range, so invest your money in some Cripps stock and you should be pleased with the returns!

That’ll be it for us this week, but we’ll be back again for one final time as we continue our search to identify some potential fallen premo picks for 2020! As always, if you have any comments or feedback you can hit me up on the Twitter machine @BarronVonCrow.

This year, Whitfield and Dusty are premium/premiums on the forward line. Nothing 'fallen' about them. Locked and loaded.

Where do you get the numbers from, is there somewhere easy or do i need to get the calculator out?

Thanks derek. They're not fallen to start with, that's not what we're looking for, we're trying to see if they have a history of falling during the season. EG Dusty has a clear pattern emerging of falling from his starting price, that gives me pause on starting with him knowing I may be able to get him as a fallen premium at some point in the year. If we can ID who will fall, we can hopefully invest our money better in our starting options!

Thanks Barron!
I guess you can use the statistics in many different ways.. All the premos are going to be cheaper at some point, that's just the way the pricing works. I would argue Dusty is a pretty reasonable selection, based on his starting price/ averaged at 100. If you look back over the last 3 years, in 7 out of 9 of those periods he did better than that, and started ok in 2017 & 18 107.9 /107.9 . (If you look at 2019 he was just ok for 5 games but he had a 66 against Coll is rd.2, and 60 against GWS in rd3. In both games the tigers got flogged. Rance did his ACL, rd 2 Riewolt did his wrist, rd 3 Cotchin did hammy, Short did the elbow and Dusty got rattled by MattDB and copped a suspension! etc) .. So on average dusty is a pretty good chance to hit/ exceed his price.
Using the same logic Whitfield avg 111 is a reasonable change to hit his average since the end of 2018 and all 2019 he was around that, Gawn 128 and Grundy 130 will be close, Laird at 97 is cheap on face value but I feel some risk, and I would argue Cripps is the most likely to be available cheaper , but as you point out, some huge scores and stinkers. In the end, who knows! food for thought anyways…

Great article, needs a different name. I wouldn't of considered Whitfeild, Dusty or Cripps as fallen premiums. I always considered 'fallen premiums' associated with players who consistently scored over 100 points up until their last season where they have a massive drop off in output for whatever reason. For example; a new less SC friendly role on feild, playing a large part of the season with a niggling injury, a drop in form and fitness or finally, father time has caught up to them. I always thought that when people picked a fallen premium it was because they thought the player could recapture their form from previous seasons and therefore making them underpriced going into the current season. The player that most comes to mind this year would be Bryce Gibbs. I am by no means an authority on SC terms and definitions so if I am wrong please ignore all of the above.

We use the term "fallen premos" for mid-year trades (though your definition is very valid too). The idea is to try and identify players who have a history of becoming fallen premiums at some point through the year so you don't spend big bucks on them to start with and can perhaps re-arrange your starting side to avoid these players. The two things that will decide your season, your starting team and who you trade in. We have a lot of people concentrating on who they are starting with, but i'm looking a bit long term with these and seeing if there are players people perhaps think as starting options who might be better off as mid-year trade in options instead.

Thanks for these articles Barron, sure is interesting, I was considering not starting with Dusty, I didn't last year ether, but was worried that it could backfire since most players would be having him as their F2, but I might end up having him as a bye round target to bring in.

I certainly don't think he's a bad pick at all, end of the day he's still going to be a top forward option. I personally will be taking the risk that I can buy him at a cheaper price mid-year, but that's playing into my tight-arse starting forward line this year.

Hi I have 2 leagues with places still available WeLuvF.U.R.L code 427070 and another league I set up last year for West Australian players West is best code 156047.

Would anyone be interested in entering a JR cash league this year that I am thinking of starting?

If there is enough interest I will set up an account and a league. It could be a lot of fun and make the community a bit more exciting this year :))

Hey man, I’ll join it for sure. I’ve also got a few spots left in a $100 league I’m running and we’re trying to build towards a $500 league if you, or anyone else, wants a spot in either league email [email protected]

We have six locked in so far and may only go to 10, so get in quick.

Hey man I'd love to join your cash league – I'll flick you an email :)) $500 is probably a little out of my reach at the moment but the rest of it sounds great x

Hey Finnius are you in up the cazaly league? If not would you like to jump in?

Hi Shake, I may as well chime in, Hey Finn did I invite you to the JR Megaleague?..if I did, get yourself in there mate.

Just want the best players in Russty. Love playing you guys if l can get Finn would be fantastic and just waiting on the bunnies…cmon Derek!! 🤗

Flick me the code rusty and I'll be in there :))

Hey shake, I'm not in yet mate thanks for the invite. What's the code?

Round open! #JREL Round1 is now open!

Goddard and Bartel!
Both KFC #SuperCoach ⭐️'s, but will they make it to the Hall of Fame?
VOTE | https://bit.ly/2weVPe0

Round open! #JREL Round 1 is now open!

Please note: our #HorseRacing projections are published prior to fields/jockeys being finalised and are subject to change.

Check your @Racing_SC stable closer to Race 1 for potential changes as this may have a significant impact on our #Supercoach projections.

Here are our Top projected Jockeys for Saturday's meet at Randwick. 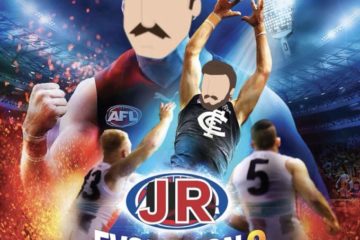 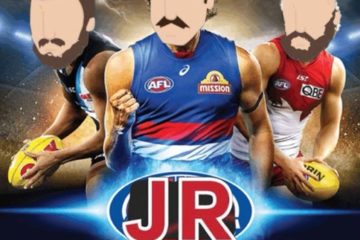 How To Play Our New Fantasy Game

The Basics The Jock Reynolds Evolution League (JREL) will allow you to play fantasy football based on simulated games of AFL Evolution live streamed on Twitch at www.twitch.tv/lekdoggames. From the team line ups below, you Read more…

A Letter to the Community: JR Evolution

Dear Community, It seemed strange watching round one played out to empty stadiums, with no roar of the crowd, no packed trams and trains, and no lines at the bar. Coronavirus has ruined everything we Read more…