As an out and proud Richmond supporter, I thought nothing could rival the man-love I feel for Dustin Martin…

… I was wrong. The man-love coming (lol) from Carlton supporters for Patrick Cripps is on another level. “He’s a beast!”, they cry. “He’s never had a full preseason!” they yell. “I want to lock him in my basement and watch him while he sleeps,” is something I’ve probably seen on Twitter. 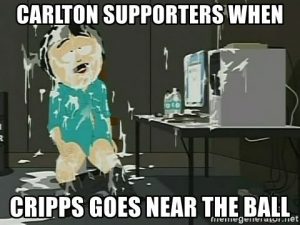 If you got your hot little hands on the 2017 Jock Reynolds magazine, you’ll fondly remember a certain page you found yourself constantly flicking back to. No I’m not talking about the centrefold, rather the Hunting the Next Midfield Beast article.

It looked at the first 50 games of established midfield beasts – Bont, Fyfe, JPK, Neale, Pendlebury, Rocky, Sloane, and Treloar. Looking at stats like their total possessions, contested possessions, clearances, tackles, goals, time on ground %, and SC average from game 1-10, 11-20 and so on. By finding the average of these statistical markers, they could then be applied to up and coming beasts to see if, from a statistical viewpoint, they’d be ready to break out.

Averages for the beasts

At the time of publishing, Cripps had smashed it in his first 40 games. Only recording a lower SC average during games 31-40 (103 v 98) and a lower amount of goals across all four game ranges. How did his 41-50 block of games pan out? Let’s have a look.

Even though his disposal average dropped by 3 from game 31-40 to game 41-50, his SC average increased by 10. Cripps looks primed and ready to go. Now before you Carlton fanboys reach for the tissues and hand lotion, I do have some concerns.

Look at his TOG%. I love TOG%. If wannabe beasts are going about their business for longer you’d naturally expect their SC average to rise. Cripps is basically tapped out in that regard. The top 5 contested bulls from last season (Danger, Dusty, Oliver, Matt Crouch, Tom Mitchell) had a TOG% average of 82%. Looking at games 21-50 overall, his key stats don’t move around all that much, you could draw the conclusion that what he does on the field in the time that he’s there has reached its peak.

Away from the numbers, Carlton’s list is what the French call a certain – le shité – Champion Data ranking them last in list quality list year. With a further 13 list turnovers this year, the loss of Gibbs to Adelaide and Docherty to an ACL, there’s a leadership vacuum and Cripps will once again be asked to shoulder a lot of midfield responsibility.

There’s no doubt Cripps will be a good player, in fact he already is a good player, but I question whether he can become the next great SuperCoach point scoring pig based purely on stats.

Fans of what I call the “even build” approach to Supercoach – that is: a few premiums, a midpricer, the rest rookies – will no doubt see the appeal of someone like Cripps. However, in a year of stacked mids if he blows it or doesn’t take a a big enough step he becomes a bit of middling player that’s good, but not good enough to match it with the top midfielders.

Cripps is not a bad pick, but you’re taking him entirely on faith that he will improve his  footballing smarts rather than him taking another big statistical jump in 2018.

What do you think, Community? Will Cripps tear 2018 apart?

Only issue for me is will he attract more of a tag with Gibbs not there anymore or will the tagger go to Murphy? Also may be some more points coming if he goes forward like he did playing the saints the other night?

Cripps forward was interesting, Krups. As you can see from the tables he’s not a noted goslkicker. Saw a few comments on Twitter saying 120 was overs for him, but take away 16 points for his 2 goals and he gets 104 which is now not real fantastic. Keen to see if he drifts forward again for JLT2

Great analysis Kev! I am torn between starting with either Cripps or Coniglio for my final premo M5 spot. Both players should get pretty much pure midfield time and decent TOG. Carlton are extremely light on in their midfield and Cripps will be ask to do some serious heavy lifting there. GWS do not have this problem. With guys like Josh Kelly, Lachie Whitfield, Callan Ward, and Coniglio running through the midfield, Coniglio may have some points pinched of him. That said, Coniglio is so bloody tempting right now. With a price tag of just 452K and his monster JLT 1 game, he might just squeeze out Crippsy. But then again, with his checkered injury history, perhaps I should just stump up the extra 85K and go for the "beast".

Same issue running through my mind, Hawk. Didn’t need that from Cogs. Thought his numbers may have dried up a bit with no Mumford but didn’t seem an issue.

Awesome analysis Kev! I think a lot of people have Cripps purely because of the fear of missing out. For a player with question marks it's probably worth spending the extra 70k on a guaranteed top 8 mid. Having said that, however, he is currently my m5 purely for the fact I can't afford anyone more expensive. I'm too greedy I know

Great write up. Thanks. Love your number crunching. Do we entertain the idea of Bont in our mid as an alternative to Cripps?

Cheers, Red. Doing the write up for the Dogs v Hawks later today. I got burnt by him last year buying him at a premium then he shit his dacks. Not overly keen as a personal preference, but nothing wrong with him that I can think of.

McLean named in guts is one to watch

McLean I have. Reckon he'll do very well this year. I'll look forward to your next write up. Cheers.

He is going to spend more time on ground resting up forward.
JLT was just a taste.
Good luck to the poor old medium sized defender trying to stop a guy who is taller than the duck

Wont worry if they tag him did that and failed he is strong and has quick hands. Murph will always get the tag as u can impact his influence.

Nice article Kev. Taking the Higgo role is no easy feat. A lot to like about Cripps. But as you say in a season stacked with rolled gold mid premos I'm not convinced he can make his way into top 10 territory. The competition is elite. He's at a price where you can't get rid of him & for that reason & not seeing too many wins for the blues I'm going to pass

Macrae on 67 at quarter time. Could be a very rewarding pod

Early signs very very promising for Aaron Naughton. Took a gutsy marking running back into the pack, uses the pill well, runs hard, and attacks the footy. Almost sold on him already. And its only half time!

Getting better as the game goes. Picking up the tempo. Doesnt look out of place thats for sure.

Be nice if Clarko could give Mirra a run. I am super keen to have a look at him. Jaeger Omeara needs to do more for me to pick him at this stage. Still not convinced after what I saw in the first half. Cheers TRIGGA

There was a piece of play in the second where Naughton got the ball out of defence & kept running down the ground chasing. Straight into my team after watching that. Same opinion on JOM. Hasn't done enough

Yep. I saw that also. When he got the footy down back he passed it off, kept running, got it back, and then disposed of it again, and he still kept running all the way into the forward line. That play pretty much has got him locked into my team and that courageous mark earlier in the game was brilliant as well.

You don't see many first year players do what he's doing. Find a spot for him

I’ve been big on JOM. That wasn’t good.

Whitecross seemed to be in more centre bounces than JOM

You won't really go Dawson after all your ruck troubles surely Derek?

Locked in for me:

Dalhaus can go suck an egg.

Is there any game ever where Titch doesnt get leather poisoning?
Probably should tell him its a pre season game

Only knows one way.

I agree. Him and Danger are must haves for me. Both have that ability to go NUTS and find heaps of the ball.

Payne is looking a likely type, $117k def, going well, good size about him.
Seems we might have quite a few def rooks on offer.

What are people's thoughts on Stef Martin? I initially had Nic Nat in my team but his fitness is worrying so im looking at other options for R2, do you guys think that Archie Smith will be a serious problem? Cheers.

Looks bloody good today AB, don't think Archie is playing tho. Its a prick of a situation, I'm half keen on him too.

I brought him in on that performance. McStay and Walker were doing the ruck relief duties, no other ruck was even selected. He might be rested for JLT 2 but I think it's clear that Brisbane aren't going to play 2 rucks.

Considering how wide open the ruck situation is beyond Maxy, he made the watchlist. Would love another look, Swans didn’t put up much ruck opposition

Absolute lock. Not a Carlton fan.

He is a 6.5 midfield beast your kidding yourself if you dont start with him