Before getting to the JR Draftstars, I would like to highlight three significant promotions for your consideration;

1. The FREE PLAY JR Academy Competition with $100 in prizes on offer.

2. The $2 JR Graduate Competition offering a vast overlay(explained below)

3. A first-time Draftstars sign-up offer for those yet to join (Jock will be emailing the details of this shortly to those eligible).

The Academy Ladder after 11 games When the odds of a successful outcome are stacked heavily in your favour it’s time to play!

When considering any wager one must weigh up the odds and expected return or most likely outcome to result from the bet. Below I have detailed some simplistic mathematics relating to last week’s contest.

In last week’s contest, your expected return on your $2 investment was $3.54 ….. SIGNIFICANT!!

And now to this week’s game – FREMANTLE v RICHMOND

With both teams coming off disappointing losses and some tantalising sideshows – the return of Harley Bennell, Martin V Fyfe, Richmond’s forward line, Fremantle’s ruck division, the Lachie Neale midfield void ….. this game will be an intriguing affair.

While it seems hard to mount a case for the out of form and depleted Fremantle side, I feel that they will be competitive in their last home game for the 2017 AFL season.

While I am not prepared to risk a $10,000 spend on Harley Bennell, young Fremantle defenders such as Weller, Ryan and Hughes are of interest to me in this contest as I do forecast another high inside 50m count from the Tigers. I am anticipating the return of Sheridan who, at this stage, I have placed in my team – this of course is subject to change once final teams are announced.

Value hunting will also be an important consideration as I see Martin, Cotchin and Prestia potentially getting the better of Fremantle’s tired and depleted midfield most probably consisting of Fyfe, Mundy and the Hill brothers. Whispers do surround the possible inclusion of the rookie mid, Jack Graham for the Tigers. If he plays he will be hard to pass up on.

What a significant resource! Thanks again to Darryl and his team at Fantasy Insider for allowing The JR Community to access this resource. For those wanting to examine forecasts for other games this week, click the link below.

In exciting news, Darryl and the team are opening up the lineup cruncher for FREE USE to all and sundry.. I highly recommend you leverage this opportunity to your benefit. 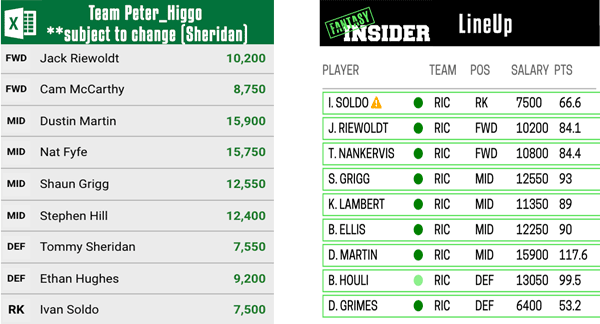 As discussed earlier, my team is based on the selection of Sheridan and non-selection of young Jack Graham – this team is very likely to change!

It is interesting to note that the Fantasy Insider machine learning tool and its LineUp cruncher has landed on a stacked Tiger team. I feel it may not be quite so one-sided so I am more than happy to have 5 of my 9 players from Fremantle. This may prove just the point of difference that my team will need to win!

So Before I hand over to you in the comments, please take the time to complete this pre-lockout selection pole.

It is hoped that this tool will provide you with who The JR Community feel are “locks” for this contest. It may also affirm a player you like as a nice POD! Congrats again Higgo on your stunning victory. And on shooting to the top of Graduates Ladder.
Interesting contest this one, you would think Dusty comes to town this week, and the weather might play a part as well yet another front coming through Perth but its looking like late Saturday at this stage but something to think about.
As is the norm ill revisit this after teams are final.
Yr getting the hang of this Jock heard you say picking or looking at rucks first in your podcast, a few of regs talked about this very early on when this started up and that's where i look first also.

The Ruck choices are limited for this contest; Darcy($12,200), Nankervis($10,800) and Soldo($7,500). While I have selected Soldo in my team above, I find it hard to see him hitting even as much as 60 pts. I have little confidence in Nankervis also and as such I am seriously considering a re-jig to make room for Darcy. Stephen Hill may become Jack Graham.

Yep tuesday i had Darcy in but Soldo is now it, agree his only good for 60 and if he doesn't get to 40 45 at HT yr in trouble with him as tigs bench him a fair bit in 2nd half but they couldn't do that last week because they were a rotation down.
Just finished telling Patch if Graham is in ill be pulling it apart a bit.

I like B. Hill here. Averaging 96 at home. Before last week had one score under 92 in his past 8.

Prestia is the man.

Having a very hard look at Mundy this week. With Neale out he's going to have to collect more of the ball and none of their ins are filling me with confidence that we'll see them getting significant midfield minutes. Could blow up in my face though, as he's had a putrid year.

Has anyone ever scored over 990?

I see there's a comp beat target score of 990 and win.

Surely they r having a lend.

Would need every player to play out of their skins to even go close to that.

It has gone off 2 or 3 times from memory, Trigga, and yeah, you need everything to go right. A popular way to go about it is stacking as much as you can and then maybe a cheapie or two from other games to make it work

Tried it on the NRL yesterday. It was a spectacular fail, one that should be put in the record books.

Of course I know exactly jack and shit about NRL, so that's a good excuse.

It's sort of like going to one of them fountains and throwing money into it Trigga, plenty do it but get nothing for it.
Big Bucks but it don't interest me at all.

Jumping back on board DraftStars this week.

I am tossing up between Bennell and Reiwoldt

Not in the slightessssss bit interested in him wont get over 50 and ill take bets on it.
Played 3 qtrs 3 weeks ago had 5 disposals for the game and 3 of them were in one bit of play 2hb and a kick.
Then a week off due to a peel bye then last week 12 disposals with 2 over the top goals
They wont push him, so expect him to line up on a HFF with no mid time.
Pass for me

Yeah im gonna give him a go.
I think draftstars is a middie game.
Three times i have gone GnR and my gun failed to fire or the tne rookie just plain sucked.
So think middies is the way to go unless the gun is a lock like kruez was against a weaker ruck.

So that's the plan this week see how that goes

Soldo has been dropped. Forces us to pick Nank or Darcy. What do the community think?

About to have a rejig now, I reckon Nank could be the go playing lone wolf.

It's my first week playing this game and I think that I have hit a winning team, of course every team has and that's why they put it in, but the cheapness of some players is too hard to pass, so I have gone with a bit of Midpriced-Madness
J Reiwoldt
Dan Butler
Stephen Hill
Bradley Hill
T Cotchin
H Bennell
B Houli
A Rance
T Nankkervis

its a good play sometimes Tyruddanaut so goodluck with it.

Ditto, hedski. I'm going garbage anyway but it's something they need to address

Yeah had a shocker, needed 300+ from him!
Playing you in losers prelim, first to go woo league, pretty tight but I think your melb boys will get you up.

Leave it up to me to have a deadset horrible Sunday, hedski! Been happening all year.

How's the lineup looking for today's contest? Wasn't interested in Bennell at all start of the week but I've tinkered too much and I'm warming to him

I've gone stacked tigers 8/1, am tossing up Graham/Deluca for last mid spot, thinking a lot will go with Graham.

playing both Graham and Deluca my staggering midfield

Smashed me kev, looks like you have tophawk in the losers gf next week good luck.

LATE OUTS Think the only thing they could do is money back, but that stuffs prize pools and im pretty sure it would be covered in rules that I haven't bothered to read!
Anyone else read them?
Or you get the player that comes in as yr replacement but that might push you through the cap but doing yr money cold isn't right either is it covered in rules? Anyone know?

A rolling lockout should be easy enough to implement. Not spewing about it over a $1 contest, but I wouldn't be too impressed at copping a late out in the $15 ones

Something they can look at a rolling lockout didn't think of that one.

Has to be better than yesterdays effort.

only playing contests this week

Settled on a team after the ruck change ups after team selections, going with 5 Tigs and 4 Dorks see how they go.

Good Luck to those playing in the Community contests today.

Nice, I expected a bit more from Neal Bullen.

Intriguing contest in Graduates tighter then Crouchings abs nothing in it at the halfway mark 30pts cover the top 25 will one of them win? Or can someone like a Higgo or God help me Stirlsy come out of the pack.

Kev needs a big second half but decent so far. 440 half way.

Nice win in the academy Kev.
Not too far shy of the magical 990.
Gr8 work mate.

Nice effort Hedski 5th the heavy tigs team was the way to go.

I ended up playing in the $2 mini today, winners score 993

Then he didn't put it in.