The season is almost over and it feels like it’s just flown by. We’re up to Round 22, which means there’s just two more weeks to go before our Supercoach seasons are over.

For some it will be a time of celebration, for others, it’ll be a time of quiet reflection and contemplation. Others may just go around wanting to smash stuff like they’re playing Grand Theft Auto. It’s never too early to get ready for next year though, so we’re going to go digging in the Barron Bargain Bin again and see what players could be in our sides next year.

It feels like every year we talk about Nathan Freeman, but the truth is that 2017 has probably been the first year where he’s been able to play a large portion of football without having his hamstrings go ping on him.

He was the #10 pick back in the 2013 AFL Draft and immediately missed all of 2014 with injuries, then played the first 4 games of 2015 before hurting his hamstrings again and missing the rest of the year, followed by two more hamstring injuries striking in 2016, which kept him limited to just 8 games. It looks like Freeman might finally be getting his body right. 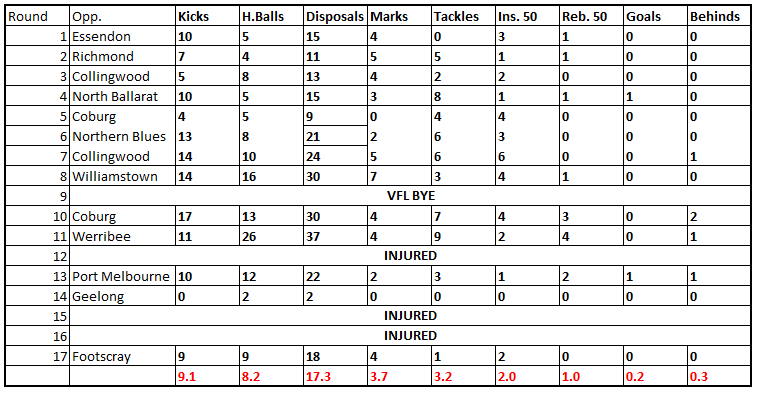 The two games he missed in Rounds 15 and 16 were due to an ankle injury, and so far this year his hamstrings have been going strong, playing in 13 of a possible 16 games so far this year. He did start off slowly, but really started to pick up the pace as the season went along, notably between Round 7-11 where he averaged 30 disposals a game.

St Kilda have said it didn’t matter how well he played this year, it was all about getting him ready for 2018. He’ll be a dirt cheap selection, so let’s hope he gets a full pre-season in, because if he does I can’t see much keeping him out of the Saints best 22. Much like Ben Lennon last week, Webb is another guy who has only managed to play a handful of games over the past two seasons and has scored reasonably poorly, although high enough that it’ll see him start the year in the mid $200K range. Webb was the #27 pick back in the 2014 AFL Draft, but has only managed to string together 19 games over that time, despite some strong VFL form. 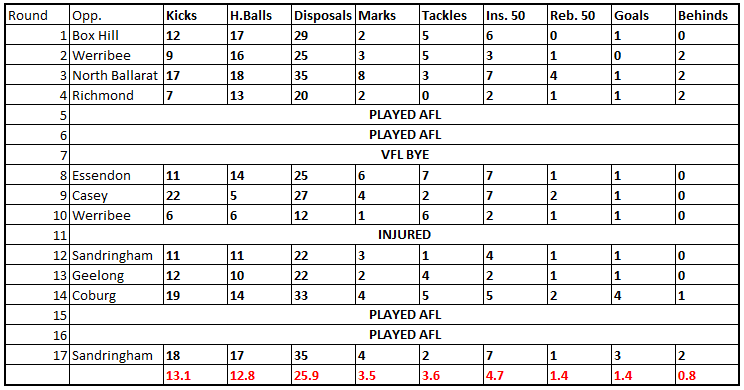 The bigger bonus from Webb’s stats is he’s been able to impact the scoreboard in nearly every game, while usually racking up over 20 disposals as well, with some really strong games where he’s had 30+. There’s been growing rumours that he might seek his fortunes elsewhere next year, with the Gold Coast being listed as a potential destination. If that happens he could be a Jack Steele type selection for us next year.

He’s only in his first year at the Lions, by Lyons has been one of the more encouraging players in the NEAFL squad so far this year. He was the 71st pick in the 2016 Draft and is the brother of current Gold Coast Sun Jarryd Lyons. Like his brother he’s an inside midfielder who is also capable of moving up forward and kicking a goal or two. 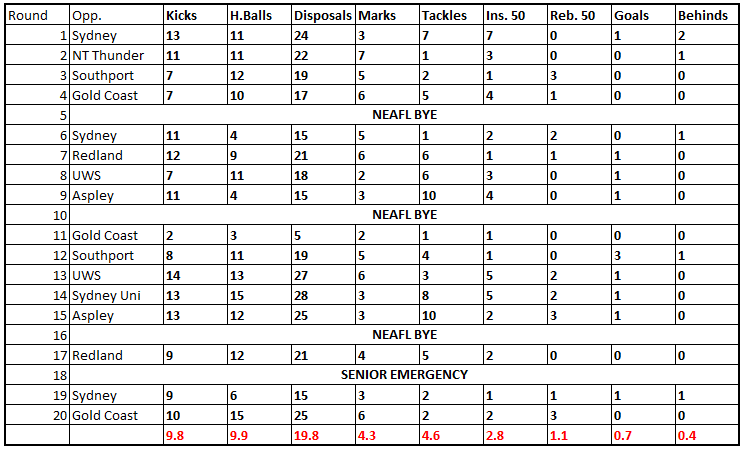 His form has been a bit patchy at times, but is averaging near 20 disposals a game and has also been made senior emergency as well. The Lions will have another crop of youngsters coming into the side in this year’s draft, but with the potential (though probably unlikely) loss of Tom Rockliff in the centre, there could be opportunities for Lyons to find his way into the 22 next year. If he gains MID/FWD eligibility, his worth will be all the greater for us in 2018.

Tim Broomhead – Dominated the game with 41 disposals, as well as kicking 3.1.

Aaron Francis – Took the game saving mark in defence and had 13 disposals, 4 marks and 4 rebound 50’s.

Oliver Hanrahan – Kicked a goal with 15 disposals and 3 inside 50’s.

Mitchell King – Had 26 hitouts with 5 tackles but just 4 disposals.

Tyson Stengle – Kicked a goal with 13 disposals and 5 tackles.

Nathan Freeman – Back in the side after his ankle injury, Freeman had 18 disposals, 4 marks and 2 inside 50’s.

Fergus Greene – Greene kicked a goal with 12 disposals and 6 marks.

Harrison Wigg – Was the travelling emergency to Melbourne for the Bombers game.

Will Snelling – Snelling had 21 disposals, 4 marks and 9 tackles.

Round 20 of the NEAFL season ended with Sydney smashing Redland 173-46 and Gold Coast beating Brisbane 111-104 while the UWS Giants had the bye.

Luke Strnadica – Had 51 hitouts, along with 13 disposals, 6 tackles and a goal.

And that’s it from me, but as always, if you have any questions or comments, feel free to leave them in the section below, or drop me a line on the twitters

Thanks for your A grade work and humour this year Barron. Who needs the Phantom when you have the Barron.

Good work this year Barron, you've been an entertaining one stop rookie shop! freeman and Webb certainly both look promising…..gotta say though I'm looking forward to the underpriced premos next year, guys like rocky, treloar, hanners, prestia etc could be serious value

That will be the big talking point for next year, Swans. Go with the new kids on the block (Kelly, Zerrett, Zorko etc) or stick fat some of the guys who have struggled at times this year.

I like a bit of Meatball action. Limited preseason with his knee, finding his role in Tigers engine room now

Yeah it will be interesting, I'm expecting an overcorrection of sorts next year of people looking for the next big thing. I mean sure like everyone I'm going to want to look at the Zorko, Kelly, Merrett Oliver et al but they are going to be priced fully, and we know starting teams are all about value….

If Neale plays on I might be doing a Selwood-Prestia this week, otherwise it'll be a Neale to someone with that last trade ….

Definitely could be some value there, Swans.

Nice write up Barron, Willi Rioli played on limited mins kicked the 4 goals all in 1 qtr
Simpson stated Monday that he is unlikely to play in next 2 games so pen him in for a round 1 berth next year.
The word is the coach has big raps on this kid.

Thanks Stirlsy. That's pretty damn good for 1 quarter of footy!

Watched a fair bit of him down at Glenelg the last few years. Kid is super talented.

That game was on tv here but I didn't bother to watch it, but got a bit air time on news.
Eagle fans want him straight into team, (there a funny bunch over here in the west) no jack about footy, Kid hasn't even played a full game in WAFL yet.
Yes he looks good in what he has done and the weagles need a livewire small.

great report BVC the interesting one for me is Lucas Webb Had my eye on him all year His delivery is first class but doesn't seem to get much of a go with bullies. Looking at him as a midpricer particularly if he changes clubs next year.

I'm really interested in him too, NDD. Murmurings about the Crows wanting him included in any potential trade for Jake Lever should he decide to go to the Bullies, sounds like he'll have a few options available to him should he want to move.

How do you see Willem Drew and Francis Watson as 2018 rookies? Likely to play from the outset?

Tough to say SCDamien. Initial reaction would be that Drew doesn't make the Round 1 side for Port, but I imagine we'll see guys like Toumpas and Ah Chee drop off next year and they might start pumping more games into the likes of Atley and Drew.

Watson could be a big one, though it depends on just how much the Eagles cut in the off-season. If they decide to rebuild they might decide to wipe out a bunch of best 22 players and give games to the youngsters. Not sure if that will happen though.

Gday BVC, love your work mate and always read your Rookie Scout report. Find it very helpful to get a read on rookies playing in vfl/sanfl/etc… Has helped me with achieving an overall ranking of 64 this season. Hoping I can crack the top 50 with 3 trades in hand.

Question: any update on what Shai Bolton did on the weekend? I have him as a floating mid/fwd E loophole doughnut. Just making sure the bastard is not likely to play so i can keep the E loophole going.

Hey Mafia, good work on the great ranking! Glad if I've been able to help in any way.

Bolton kicked 2 goals, but only had 6 disposals and 3 tackles for the game. I'd assume he probably won't earn a recall this week unless someone gets hurt.

Cheers mate, you're a legend!

Thanks for the insight all year, I've got one question regarding my last trade this year, Neale to Merrett, Beams, Parker or Murphy. On the topic of next year which out of those 5 will you be starting in 2018 if any? Once again love your work!

I'd probably go Merrett for both choices Joshua.

Sad day for the SC community with the retirement of Zac Dawson today. RIP Funny, I thought he'd stopped playing years ago!!

Great stuff BVC
A few to have a close at look at next year.
Menzel totally forgotten about him good to see him still getting a kick in the magoos

I'm still a Menzel fan, could have a spot if Gov flies the coop at the end of the year.