A tricky game in Week 10 between RICHMOND and HAWTHORN has seen some movement in the ranks … can Sven hold his lead?

And now to the ladders;

The Academy Ladder after 10 games Yes, this is correct. Draftstars are going to add an additional $400 directly to the final pool …  this simply means that the expected return on your $2 investment has just sky-rocketed!

And now to this week’s game – HAWTHORN v NORTH

With both Hawthorn and North out of Finals contention, while this year’s “Battle of Tasmania” will present as somewhat of an anti-climactic affair, the action for us will be intense as we jostle for Draftstars supremacy!

Another difficult contest – let’s now have a look at the player projections as supplied to us by Fantasy Insider;

What a significant resource! Thanks again to Darryl and his team at Fantasy Insider for allowing The JR Community to access this resource. For those wanting to examine forecasts for other games this week, click the link below.

In exciting news, Darryl and the team are opening up the lineup cruncher for FREE USE to all and sundry.. I highly recommend you leverage this opportunity to your benefit. 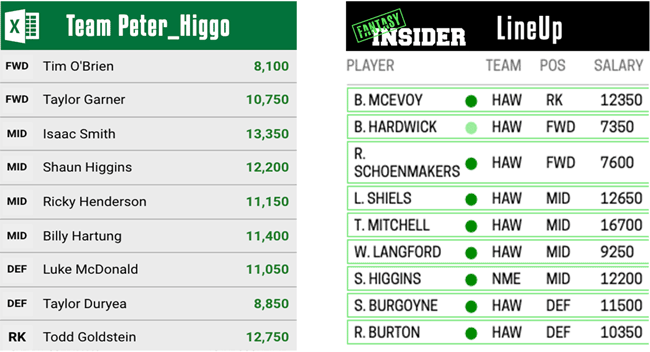 I am basing my team around a winning Hawthorn performance with a return to their high possession game off half back. Given North’s propensity to make tagging a priority, as difficult as it will be, I will be going in without Tom Mitchell. It is hoped that the savings here will allow for a more even point spread across my team.

If Majak Daw is named I will be updating my Ruck selection. At this stage I will be selecting Goldstein in the hope that he returns to the running, accumulating monolith that we know he can be. Surely the 29 year old needs to elevate and highlight his potential value his and to other teams in the lead up to the trade period.

Once again, due to the nature of Daily Fantasy, I feel teams will head into this challenge with vast variations. I have enjoyed the contributions from readers of this post in the comments and while I can’t be as certain to provide “locks” for this contest, perhaps you can?

So Before I hand over to you in the comments, I would like to try a new innovation via a pre-lockout selection pole.

It is hoped that this tool will provide you with who The JR Community feel are “locks” for this contest. It may also affirm a player you like as a nice POD!

Are Higgo, here we go again, after getting over my sore ankle from kicking myself so much for throwing the winning team in the bin for the Graduates contest last week, iv settled down for a new week of Draftstars.
Put a team in Tuesday just to fill a spot, not that we have to do that anymore, But ill be taking Titch in again you cant leave a pig out in this game, the Ruck well im lost there ATM but the lone wolf appeals to me more at this early stage.
Chat a bit more on this game after teams are set, and ill do the 3 sure starters then for you Higgo.

Big numbers on Titch in the poll as well, 53% have him as one of their first three picked at this stage. My instinctiveness is still telling me to leave him out and spread that cash across the 9 man park given his recent.. then some counter-instinctiveness kicks in telling me North have been applying a soft tag and the filthy ball magnet might just roll around in pill gathering DS scoring MUCK. Very tough call.. OUT of my lineup for now by a bees knob.

Question for roody if he appears in the comments but I've read a few weeks back that North are the #1 side in the comp for giving up fantasy 100's.

Interesting Kevo – for those who don't know him, Roody's well worth a follow on the Tweeter @thatsjustrood

+1 on that, Jock. His value hunter articles are a fantastic read each week. Especially if you're playing weekends contests or the 990 game

Interesting take re: Titch and taggers, Higgo. Adams and Treloar raised the bat v North last week. Against the Dees the week before, Oliver and Lewis. Suggests to me it's a pretty loose tag. Titch had 41 (163DT) and 30 (97DT) possies against them last year.

Looking over other lines Titch is the standout here, as Stirlsy said above, leaving a pig out puts you seriously behind the pack.

Leaning towards Goldy in this contest. Despite McEvoy's solid form, his record v North is woeful

My big spends likely to be Torch, Ziebs, Higgins and Goldie. Also like Lukey McDonald. He's on my radar for SC 2018.

Torch = Titch. He's likely to be on fire tho.

I'd almost add young Ryan Clarke to that list looking at his ceiling as well. Locked into my lineups quick smart this week Bowesy

Must have Jock LOCK at his price

Crashing into tonites game as well Team to come 30mins b4 bounce.

Might have another dip at the $2 full rounder, haven't really settled a team for Sundays comp yet.

Passing on the all rounder this week, gotta start to count how many paid games iv played or ill get kicked from Academy games and i want to play them to end of season.

Sitting 65th with 2 played, our mate Gator59 currently top of the table.

146th.. took the bate hook line and sinker with Stringer.. showed nothing in the 2nd half. Very disappointed. Had Roughead in all week until Simpson was named. Tinkering doesn't work people!

Worked that out last week SC throwing the winning team away. and i did same had Lobb there and made changes when Simmo got named.

Interesting… only 11% going with Gunston. LOCK

Gunston and Sicily loving the freedom.. Both must haves for mine, first picked.

Top stuff TGSC great collect, yr having a good w/end must be the FAV for todays game.

Big day lads & lasses – good luck. Got a feeling in the waters, old Jock is ON today

Yes locked and loaded Jock, going in with different teams again, at big boy sitting in the ruck last nite but pulled the pin on him so its a set 5 and others around them that will get the job done for me today,
Fancy the Hawks to win a dead rubber of a game my 3 top picks are Titch expect him to bring his own ball today 40 plus touches …
Sicily cant go past him is just loving the freedom down back and marking everything that comes his way.
And my 3rd is Shiels just a gut feel he will have a big game.
Heavy Hawks team 6&3 bothteams and I think my stronger team is the Graduates of my 2
Good luck Community see you on the leader boards up the pointy end i hope.

Ziebell a late OUT

YUUUUUGE. Hawks stack for mine this week. Was gonna take in Langford over Clarke as a POD but now he's a lock

A whooping 65% in the end taking Mitchell

Huge start from a few of the regs even Lek is in top 20 ATM ill just sit back in pack till HT and make my move 40 off leader at QT 37th spot, Gunston looks like he will go high here, and i dont have him.

Team forgot to come out after QT

After keeping them in the huddle a bit long we drifted back to 100th b4 finishing qtr 52 off the lead and 54th spot.
Sven is close beware the ladder leader….. The Academy – Week 10 Another fine week of Daily Fantasy combat and yet another week of DOMINANCE from Sven and his team “sveneris”. This week’s Academy and Graduate game will feature RICHMOND v HAWTHORN.  And now Read more…