We’re only one week into the Supercoach Finals and anarchy has reigned more than ever.

Injuries, suspensions, we’ve been hit heavily by them already and that’s even before we get to the team announcements on Thursday! For many of us, this week is just another reminder of why we should have held onto as many trades as we could have as we find ourselves already knocked out of the finals race in our leagues and now we begin the long wait for the 2018 Supercoach season to start.

And for those of you in that position, the Barron is here to get you started on some early homework. This week we’ll take a look at another 3 players and see if we can find ourselves some bargains for the 2018 AFL season.

First up we’re gonna take a look at Dawson Simpson from the GWS Giants. We saw this year how much value was in picks such as Jarrod Witts and Nathan Vardy, either as a bench option, or as a cheap R2, so it makes sense for us to look around and see if we can find similar value for next year.

So far this year, Dawson has been ruling the NEAFL with an iron fist, putting up some massive hitout numbers in the process. 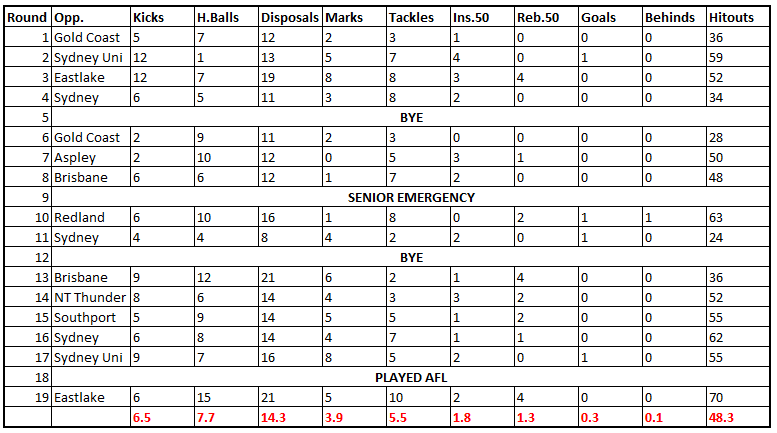 The immediate problem we’ll face with Simpson is that he played in Round 18 and scored 91 SCPoints and is likely to play again this week after Shane Mumford was suspended. For example, Dayne Beams came into this year having played 2 games and was priced at $432K, so despite the likelihood of him to cost more than the likes of Witts did this year, if he can land himself a starting gig at a team next year, there’s still potential for him to be a value for money selection in the mid-price range.

He’s had some huge hitout numbers in the NEAFL this year and his first AFL game this year saw him net 44 hitouts against Sean Darcy, who has been a pretty decent ruckman in his short career. This one will be a longshot that doesn’t likely come off, but he’s a decent POD to keep in the back of your mind should he find himself in a new side next year, or Mumford is unavailable for an extended side for some reason.

The next player up is Tom Doedee from the Adelaide Crows. The Dood has spent the last 2 years in the SANFL, he had some injury issues in his first year and over the pre-season, but has started to string some games together after a slow start. This is another selection that could be up in the air at the moment and is probably dependent on who the Crows re-sign with Jake Lever, Jake Kelly and Kyle Cheney all out of contract at the Crows for next year. If two of the three leave, Tom could find a spot for himself open up.

Jake Kelly is probably a good example of his potential if he does get game time, though Tom might have slightly higher upside as he is a decent intercept player, whereas Kelly tends to be more of a 1-1 defender. Jake Kelly has averaged 60 SCPoints for the year, with a peak price of $330K, though Tom won’t cost $197K to start with like Kelly did. Again, we’ll have to wait and see how this one plays out, because at the moment Lever (likely gone), Kelly (will definitely stay), Cheney (who knows?) and now Keath appear to be ahead of him on the depth chart.

One handy thing about Crows rookies has been Don Pyke is pretty good at giving players extended chances and likes to stay with a consistent 22, with rookie priced selections this year such as Hugh Greenwood (played 10 games out of 11 since initial selection), Riley Knight (13 games), Jake Kelly (18 games after 0 in 2016), Andy Otten (17 games this year with 0 in 2016) and now Alex Keath (3 games in a row since his initial selection) all being kept in the side for extended periods.

Lennon has been in the league quite awhile now, he was the #12 pick all the way back in the 2013 draft, but in that time he’s never been able to play more than 9 games in a season and again has spent most of the year in the VFL for Richmond, with Richmond preferring to look at high pressure players such as Dan Butler, Shai Bolton and Daniel Rioli to place in their forward line. 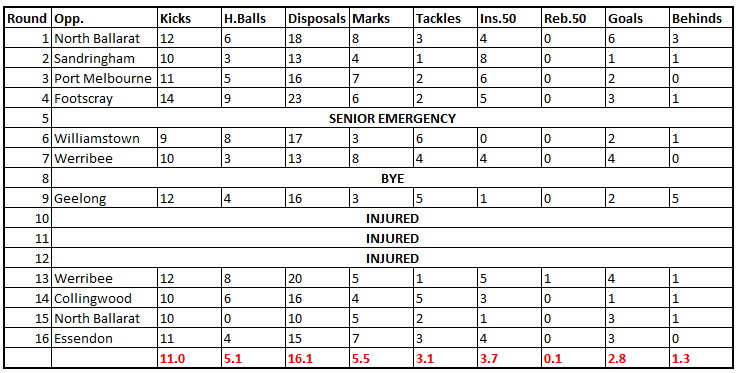 He’s been a solid goal kicker in the VFL, booting at least 1 goal in every game he’s played, while also having decent disposal and mark tallies too. He requested a trade at the end of last year, which didn’t eventuate, but will likely seek a trade again this off-season and I’m sure Richmond may be more willing to move him on with the emergence of the above players.

He’s another that will only be worth a risk if he can find a new team, but even then might come in at about $200K to start with, which probably puts him on equal footing with 2017 selections such as Riley Knight (Average of 60 SCPoints and reached a peak price of $304K), Kayne Turner (63 SCPoint average, peak price of $353K) and even your higher priced rookie selection such as Hugh McCluggage. If he landed with a side like Carlton (who chased him in 2015, though I don’t think SOS was in charge back then), he could be an OK starting selection.

Matt Korcheck – Had 7 disposals (all handballs) with 4 tackles and 26 hitouts.

No stats provided for game.

No stats provided for game.

No stats provided for game

Round 15 of the SANFL continued this week with the split round seeing Adelaide have the bye and Port Adelaide defeat South Adelaide 83-51.

Will Snelling – Had a team high 24 disposals with 13 tackles.

Round 19 of the NEAFL year saw Eastlake defeat the UWS Giants 80-75 and Brisbane beat Sydney 128-100 with Gold Coast having the week of with the bye.

Reuben William – Had just 12 disposals with 6 marks and 1 tackle.

Round 20 of the WAFL saw East Perth smash West Perth 139-55 and the Peel Thunder had the bye.

Jake Waterman – Had a foot injury that kept him on the sidelines for most of the year. Played one game in the WAFL reserves and now played his first game for East Perth’s main side. Finished with 19 disposals, 7 marks, 3 inside 50’s and kicked 2.2.

And that’s it from me, but as always, if you have any questions or comments, feel free to leave them in the section below, or drop me a line on the twitters

Awesome BVC. Tremendous service throughout the year. I've got Lennon at 272k. Extremely awkward. But he's up there in the VFL goal kicking. You'd think someone will pick him up. Do you think Wigg will stay at the Crows? Just can't break in. Seems like he's been knocking on the door for years

A forward line of 5 little guys and Jack should be a sign enough that he's pretty much out the door, imo. Not tall enough at 187cm to be a 2nd tall

Nah, reckon Wigg will be gone.

Why would Nic Nat's position change when he hasn't even played a game yet??

B T
Guest
Reply to  King-Willy-Pepsi-Can

No way he'll get DPP.

70 hit outs!
Even if half were to advantage that is impressive
Who was he up against the derimut dwarves?

Love ya work Barron, fingers crossed Kirby doesn't get a game this year.

INPieman
Guest
Reply to  The Ranger

The Ranger
Guest
Reply to  INPieman

Loves a goal doesn't he?
Love a hot dog too unfortunately.

TRIGGA_HAPPY
Member
Reply to  The Ranger

Still better than Mayne though

Word is he still hasn't quite perfected his diet

wonderful work BVC always helpful. Just a few lines to respond to Dereks season review Apologies laptop down just caught up reading Carlos.It hasn't been a bed of roses for people like Patch Lekdog Derek and others but their insight to this game has been remarkable so well done though missed Sarah .Like Derek and Keen started with too many prems and too few midpricers.Also 6 to 8 trades at finals is essential. Shake proved that and finishing top four with no trades is worse than lower with plenty. I was lucky enough to nail def early with all but Doc like Derek waited too long Fell into rucks with sandiwitts then ryder and had oliver early. Research is a key to this game and a big part of that is Jocks mag with it you would have got a few gems next year I would look more to rising midpricers than fallen players like withers berry neale bullen sicily greenwood come to mind. That didn't work this year with the likes of Weitering petracca eyc.but I think this years crop will do an Oliver next year we will need them. Dpp s is crucial even now I have a crappy team but my dpps could see me win. I still have 5 def/mid dpp s and 6 fwd. mid dpp s and a league like Pauls cashy could be fluked with prem losses to opponents even ADDICTS need cover .once again thanks to all on this site and after seeing the herald sun experts teams we have the cream right here CHEERS ALL