Another fine week of Daily Fantasy combat and yet another week of DOMINANCE from Sven and his team “sveneris”.

And now to the ladders;

The Academy Ladder after 9 games

Are we witnessing the emergence of Australia’s finest DFS player? His skill and cunning is already being likened to that of the great Garry Kasparov – a grand master who dominated the world chess scene for the best part of ten years.

Will a team like Defying or TheTeletub rise to the challenge or can a young up-and-comer like backthesash emerge as a threat to Sven this week.

Once again, we look forward to the great Sven’s weekly insights in the comments to this post.

I will once again be focusing on what I consider to be the two fundamental team selection elements; Player Projections (as supplied by Fantasy Insider in the table below) and Game Specific Forecasting.

In terms of Game Specific Forecasting, I am finding it very difficult to get a read on how this game may play out.

While the last encounter between these two teams was also played at the MCG on a Sunday in the 3.20pm time slot, it fails to shed too much light as four of Hawthorn’s best five players were Sam Mitchell, Josh Gibson, Bradley Hill and Jordan Lewis. Between them they amassed a staggering 131 possessions. In fact, while the Hawks lost this game by 70 points, they smashed Richmond in the possession tally – 443 to 334 … that’s a 70 point loss after having the ball in hand 99 more times!

This is a trend which has continued for these team in 2017.

Interesting. These two teams have vastly differing statistical game styles with Hawthorn continuing to play a high possession “keepings off” style, while the Tigers appear to be direct and happy to play a much more contested style of football.

Of most interest in the table above is the fact that in 2017 Richmond as a team have yielded, on average, the least Draftstars points per game.

What a significant resource! Thanks again to Darryl and his team at Fantasy Insider for allowing The JR Community to access this resource. For those wanting to examine forecasts for other games this week, click the link below. In exciting news, Darryl and the team are opening up the lineup cruncher for FREE USE to all and sundry.. I highly recommend you leverage this opportunity to your benefit.

I am basing my team around a high possession Hawthorn game with Richmond once again dominating in terms of time inside their own forward half and within their 50m arc. I may stand corrected, however, I do believe the Tigers set an all time AFL record last week by accumulating the most tackles inside their forward 50 – 27 team tackles were laid inside the 50 arc! Significant.

While their price is prohibitive, in terms of security I feel both McEvoy and Mitchell are locks.

I will be punting on the successful return of Jack Riewoldt and a solid game from the speedy Dan Butler. 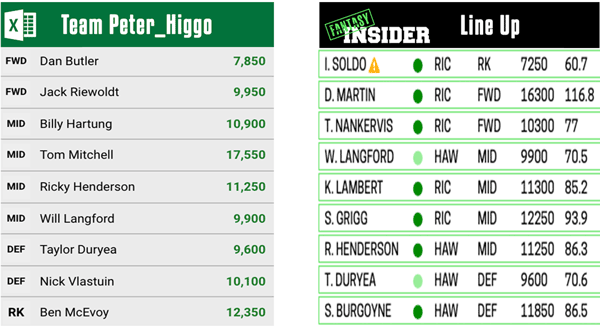 To be perfectly honest, I have found this contest to be extremely difficult to predict and would greatly appreciate the input of our regulars and others so that we can as a collective seek greater confidence in our team selection process.

So it is now time to hand over to you! You've got the Lions v WC Cruncher there, Higgo! Needs an update

Word filtering through that Jack Graham will be making his debut on Sunday. If you've been following him in Barron's rookie writeups he knows how to find the pill

Sicily clunking everything and looks to be value at 11.7k

Prefer Graham to miss the rest of year Kev and every other rookie to help us out next year.
Last thing I heard on Graham was he got injured again and would find it hard to break in to Tigs Team

Right you are, Stirsly. Returned to the VFL last week with 28d, 7 tackles.

Tough to see where he fits. Unless of course it means Caddy gets dropped. That I can get behind

He came back earlier then expected then.

Sven Sven Sven, he's had his Swedish 6ft blonde long legged beauty Fantasy.
It's time to step up Team Stirlsy and get one of these Blondes for yr self.
Big Boy looks a must in this, and it should be an even contest.
The Tigs have had the wood on the Hawkers for a number of years always seem to play well against them,so im tipping the tigs to win by 3 goals.
Talk a bit more tomoz after teams are final but it looks a 4/5 split of team players for me at this stage.

How you going in the $2 all round Mini Higgo? 5 Teams in it last week did you get a collect?

Might have a crack at that this week Stirlsy, disappointed I've dropped out to 21st on the academy ladder, will need a big one this week.

Not sure if Sven has played any of the other games outside of the page contests Hedski but he should give it a go the way he is going.

Sshhh, he'll clean us out!!

Hey Stirlsy and Hedski, Yep playing a few different games, played a few $15 games with no results. Seem to get my best scores in the Academy. Would be interesting to go back though the more high roller games and see how our better scores would compare in those contests.
Haven't researched Sundays game yet- standby.
Sven

Hey Sven, I'm liking Nank if Soldo gets the boot this week, I'm looking at a more even price spread can't seem to pick the good cheapies.
Might forgo Titch/Dusty not sure yet, could be suicide.
Mate your killing it good luck again this week.

Look forward to watching your progress closely again this weekend Sven, congratulations on a brilliant start to your career son. The community is proud of you.

Agree Sven, Draftstars should open up contests to be viewed when finished.

Hi Stirlsy. I had Ablett in 4 of my 5 whole round competitions lat round – very disappointed when I learnt that he was a late out. The other team collected $4.20 … or something like that. A shame you are not given a correction trade when a late out occurs. I have just put two teams in for tonight – SYD v CATS. If I collect, I may well play again tomorrow.

This one is a head scratcher

Think you need the 2017 brownlow medalist Tom Mitchell and the runner up by 1 pt Dusty as they should dominate the game and have the Lions share of the points but with those two in the team it is slim pickings for the rest.

yep it sure is, think ill join in the scratching come 5pm.

Might revisit this not that rapt with the backs but at this stage that's the Fantasy bunch ill be playing.
This is not a bad game to play in good prize money and pays $3 down to 200th place.

Of course Jock, its finals!!!!

Great i better go do what i gotta do, fill the fridge.

Play on – it's Brian Taylor missing from the comm box. Bloody hell sorry ladsSent from my iPhone

All rounders dead with that injury

Ah crap, was wondering why he was only on 8 at half time.

Yes a couple of inj there mate and a non starter.

Had another go at today's.
I'm going in to the academy/graduates today with two different teams for the first time, will be interesting to see how they go.

Same but 5 the same in each team.
Team 1 is 6 tigs 3 hawks
Team 2 is 5 tigs 4 hawks
Fly high today Hedski NO INJURIES

I have one with 5 tigers one with 5 hawks.
One team is an even price spread, one more GnR.
Both have Big Boy.
Good luck Stirlsy.

Well im away to a good start in both, where are you? I don't want to look at standings in case Sven is in front! LOL

205 from both teams in Q1 2nd and 9th can the FANTASY come true today?

So far so good Stirlo!! 2nd at half time you magnificent Beast

Your looking the one now GRAND MASTER

The team i pulled apart scores 753 hard to win this game….

My mid priced team seems to be well in front of my GnR, update after the game (both going pretty crap)

DANG, should have kept Nank and Caddy instead of BigBoy and some Muppet, would have boosted me right up, ah well next week.

yep Caddy was the last guy i upgraded after going Soldo had just the right amount to go him to Henderson from him.
Like you said next week.
Jocks getting better at this, take notes Higgo.

I was worried about Caddy playing to deep fwd, shouldn't have.

Had an absolute bloody mare. 77th in graduates… Big Boy, Burgoyne, Miles all terrible. TMitch was a waste of 17k. Rioli my only win

I'm still dirty Kev had the winning team in Grads and changed it all around with 90 mins to go, ah well there's always this week laid out 6 bucks this week got 8.40 back so cant complain.