It’s that time where we need to pull our collective fingers out and craft a kick arse CoachKings play at home lineup. Thanks once again to our great supporters at Fantasy Insider, the home of this nation’s most impressive fantasy footy tools and the reason there’s $500 of free cash to be won.

Many of you will know the secret to dominating this game-by-game fantasy footy caper by now. For those don’t, I’ll let you in on a winning formula; Early doors this season the word was that ‘The Petrac’ would spend all of his season up forward.

Did you see what happened in the last half against Adelaide last week? A move to the midfield. You need to be onto player positional changes like a rash in this caper. He won seven clearances out of the guts and had an absolute blinder (103 CK).

He was instrumental in the win, and I reckon we’ll see him spend plenty of time in there for the rest of the season. He’s at unders. Lock the crap out of him in this one.

Look. I’m not an advocate for this man in the long form of the fantasy footy caper. We all know that.

HOWEVER – I reckon I can bring myself to endure his insanity inducing antics for one game of footy. He’s averaging 93 CoachKings points this season when he hits the park and bashed out 90 in a loss last week.

When he’s on – he’s right on and I’m backing him in against Melbourne tomorrow. Don’t burn me pls Shaun.

Yes, he’s been one of the best performed CoachKings selections in the entire competition over the past two weeks. Yes, he’s cranked out consecutive 120+ games.

But he’s at overs in my opinion, and I reckon he’ll be significantly over selected. I won’t be selecting him in my team, banking on the idea that he’ll underperform his price point and give me a significant advantage against the field.

TIME FOR TOOLS – THE CRUNCHER

The Fantasy Insider lineup cruncher (there’s a free trial up for grabs) is the bees knees when it comes to DFS (Daily Fantasy Sports) lineup construction. Feel free to use the Draftstars platform, because it matches CoachKings completely for prices & scoring. 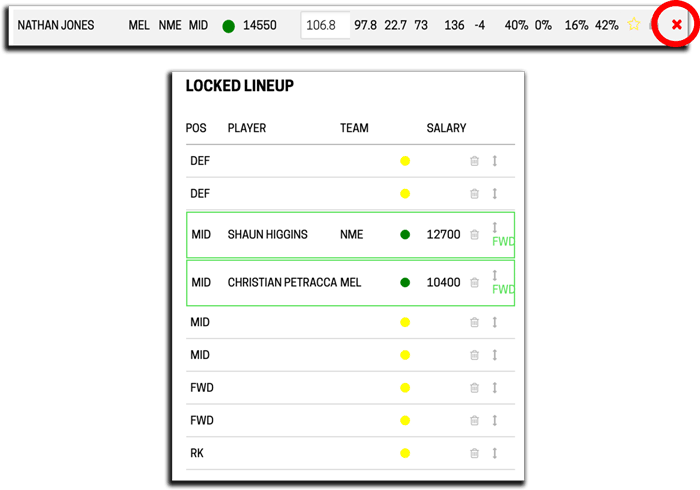 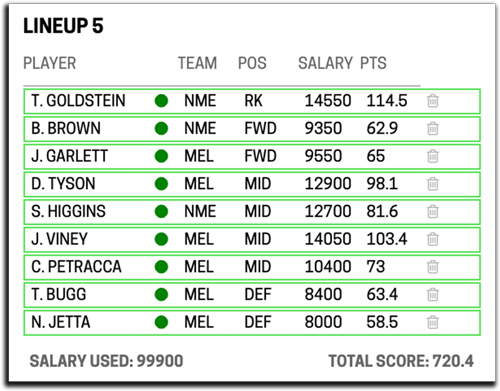 THERE’S THE TEAM TO BEAT IN COACHKINGS PLAY AT HOME TOMORROW FOLKS!

What you reckon about Swallow back in the action, Jock? Played his way back into the team. 10,600.

Very hard to find a good team with Goldy's price included. Might have to do without his 98 hitouts today.

Apart from the #AFLGrandFinal, is there a better day of the year than #SuperCoach Day???

Jordan Dawson ($550,300, Def) was spoken about during teammate Luke Brown's presser this morning:

Public service announcement: Squads from the KFC #SuperCoach team picker will roll over when the game opens

Starved of consistent opportunity but with Dawson moving to the Crows, there’s a vacant spot on the wing & Stephens could be the one to benefit. Won the club’s first 2km time trial of the pre-season, averaged 104 #SuperCoach points in 8 VFL games in 2021.

Team Preview - Hawthorn http://supercoachtalk.com/2022-team-preview-hawthorn/… Thanks to Holy Cow for putting this together for us! #SuperCoach

Tonight, I’ll whip up another player profile and discuss Wilmot. Huge talent but tough list to crack into, maybe not the lock we think he is. I’ll go into that later on. #AFL #Supercoach #BrisbaneLions @darcywilmot44 #RookieProfiles

The Academy – Week 2 1.     The Academy Community Ladder & Teams after Week 1 (FRE v COL) This will be updated weekly, only showing the cumulative point score of the Top 20 place Read more…