I’m going to let you in on an advanced Daily Fantasy Footy strategy this week.

If you’re competing in contests where there is some serious cash on the line, you’ll be up against hundreds of other players.

The contrarian strategy is all about trying to cut down on the number of these opponents you’re actually compete against for the cash if things fall your way.

This is a strategy you can use on all the daily fantasy platforms, including CoachKings (especially in the big Sunday play at home contest!)

Turning your back on the pack!

The contrarian strategy is all about going against the odds. Take Sunday’s Gold Coast v Port Adelaide game for example.

Port Adelaide are short priced favourites for the game. With this in mind, a large number of DFS lineups are likely to contain more Port Adelaide players, especially in key positions such as the key forwards, or midfielders who rotate forward.

This is manna from heaven for the contrarian strategist..

They don’t necessarily need to win the game, but let’s say they get within 15 points. A team with Gold Coast players in key positions is both unique, and competing against a small percentage of other lineups that also have Gold Coast players for the big cash.

With the unpredictable nature of recent AFL results (every team who won last week beat a team above them on the ladder!) this is a strategy well worth trying out.

As always, let’s use our brain.. but also the standout tool in the DFS business – the Fantasy Insider lineup cruncher. (grab a free trial right here).

Before letting the cruncher work its advanced predictive projection genius, let’s lock in some nice contrarian selections into our lineup.

I’m honing in on Gold Coast and Fremantle forwards and mid/forwards. Both teams are underdogs, and I predict that the combination of these selections will exist in very few lineups tomorrow.

Perfect – we’ll be competing against a much smaller cross section of the rank and file. 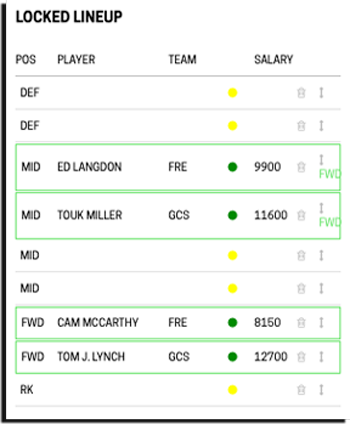 Strongly consider setting your player projections closer to the ‘Ceiling’ for the big contest, you’ll need your selections to perform well to make sure you snag some cash, and this tells the cruncher to work it’s magic based closer to players performance ‘ceilings’.

I like the look of the third lineup presented to me by the cruncher. I’m locking it in. Todd Goldstein looks to be approaching something resembling good form, and the contrarian in me likes the look of six players from Gold Coast and Fremantle. Best of luck for the rest of the fantasy weekend! Why not cut your contrarian shark teeth on tomorrow’s FREE CoachKings play-at-home? There’s $500 of free cash up for grabs so why wouldn’t ya!

Once again…I have made the first comment in this thread.

What’s everyones opinion on Liam Baker as an f6 in #SuperCoach ? Only have 520k to spend and looks like the best option. Seems like his last 6 weeks have been massive compared to his first 8. Role change?

Ruled out of Saturday's game due to a hip injury

@Adelaide_FC coach Matthew Nicks: “I know there’s a fair bit of noise around getting Tariek into the side & that’s warranted. We want to make sure he’s ready… We want to get that (team) balance right as well.”

Is Jack Steele in your trade or captaincy plans? Hear the full #JockMailbag podcast on our website. #SuperCoach