Sharko back for another week – and I can smell some blood in the water.

I’m here to help you whip a winning Sunday lineup together using the best tool in the business, the Fantasy Insider lineup cruncher.

Last week I discussed the importance of doing your own research.

Some choose to let the lineup cruncher do ALL the work, and that’s fine. However, I’m a massive believer in the fact that you simply MUST do some of your own research to get an edge on the competition.

Of course, CoachKings play-at-home (free as always) is also cranking on Sunday, with Fremantle v Essendon on the menu. Get your teams in here for an absolutely free go at the $500 prize pool!

Time to rip a chunk of flesh from the thigh of this thing – let’s build a lineup.

Lewis was in pretty good form last week, racking up 30 possessions and 104 DraftStars points in his first game back from injury. The thing that most attracts me to Lewis this week though is the fact that he plays his old mob – Hawthorn.

He’s a proud man. He has a point to prove. I expect him to be as fired up as he’ll ever be for this one and I’ll be locking him into my lineup before I let the cruncher fill my remaining slots.

Heeny attended a massive 21 centre bounces last week in his second game back from glandular fever, and belted out 120 points.

Provided he maintains something close to that output, and I suspect that he will against a young Brisbane lineup, he’ll safely outperform his starting price.

Danny boy will run out to play his 150th game this weekend. Players will typically lift for a milestone, and I’m backing in Rich to do the same.

He also played a role I was interested in last week – rotating between half back and the middle. This is a role he plays well when he’s on song and, again, I believe he will outperform his modest starting price.

So, I’ve locked three options I like into my lineup. Now, it’s time to tweak the cruncher a bit before I let it do it’s thing. 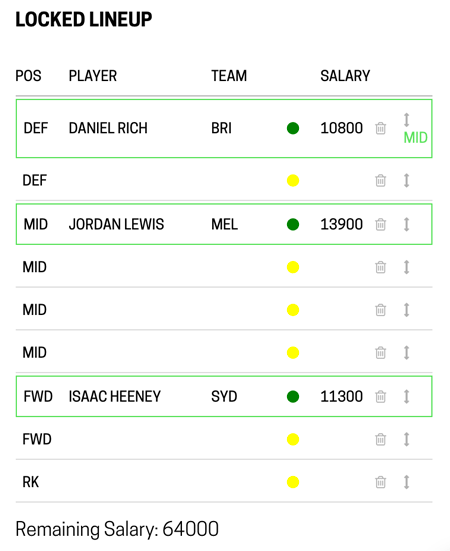 ..but first, I want to adjust player projections towards the ‘Ceiling’. This will tell the cruncher to calculate its most prolific projected lineup based on the assumption that the players considered will perform close to their best.

This is the way to go in the bigger contests, you need all your lads on fire to win the big bucks. Why enter one lineup when you can enter four of the bastards into the contest? There will be blood in the water on Sunday folks, and one of these lineups will spilling it.

Good luck with your fantasy footy this weekend guys, hope this helps those of you dipping a toe in the pay-to-play waters, but either way I’ll see you on the play-at-home CoachKings leaderboard on Sunday arvo!

I have made the first comment…that is all.

#supercoach
Make trades for first week of finals? (It's an elimination final for me)
Have 3 trades left so it would be my final upgrade

SEND QUESTIONS! Reply to this if you've got a dilemma in #SuperCoach or #AFLFantasy?

@NMFCOfficial update: "Has been ruled out of this weekend’s clash with Geelong... Suffered a delayed onset of concussion following an incident in Saturday’s game against Carlton."