Something a little different for you all this week – I’m here to show you how the Daily Fantasy Footy Shark goes about its business.

By now a lot of you will know what Daily Fantasy Footy is – most of you are having a real crack at CoachKings (PS – congrats to Texas Hold’ Em who won the CoachKings Series One Final at McQueen’s Tavern last night!). CoachKings is free to play at your venue and on Sundays at home.

Note: Cruncher unavailable for CoachKings this week – back in action next week!

Jock’s game has quickly become one of the most popular formats in Australia and rightly so! Series Two begins today so get down to your venue to qualify for the next final!

Some of you however may have also been brave enough to dip your toe in the water on some of the pay-to-play sites.

Today I’ll be showing you how to use the Fantasy Insider tool chest to help you increase your chances of winning cash in pay-to-play land!

COACHKINGS PIES V CATS PLAY-AT-HOME – ENTER HERE TO HAVE A FREE CRACK AT $500! Want to be a Daily Fantasy Shark? Come on, I’ll show you how to get started.

The Fantasy Insider lineup cruncher is an absolute must. What you need to find is that perfect balance of your own research, and the use of an advanced statistical projection engine. This is what the cruncher is all about.

I’m going for a Sunday Sting this week, and I’m entering a lineup into the DraftStars $50,000 Sunday contest. I need to select 9 players from all of Sunday’s games within an $100,000 Salary cap. The scoring system is the same as CoachKings’.

Step One – my own research

The Fantasy Insider lineup cruncher will pick your whole lineup if you want it to – but that’s not the way to go about it. A machine can’t predict everything, and a machine doesn’t understand some of the nuances of the game & critical aspects such as changes to team structure.

My first step is always to lock in a few players before I let the cruncher do its thing.

Tackling is equally important in DraftStars as it is in CoachKings, and Rory Sloane in averaging 10 per game. Sloane is expensive, but in his current vein of form I don’t want to head into Sunday’s contest without him.

Here’s what I was talking about before – Pederson is the main beneficiary of the injuries to Max Gawn and jake Spencer. He comes in to battle it out in the ruck, and as such I consider him significantly underpriced. I want him in my lineup, so I’ve locked him in.

Ditto. Leuenberger is being rested, and in comes Tommy Bellchambers for his stint in the ruck. Cheap as chips and will slot into a relatively lucrative Draftstars & CoachKings role.

* note, I’ve also made sure Brad Crouch is not selected by the cruncher by excluding him from the player pool – WAY overs at $14,600 coming into his second game back. 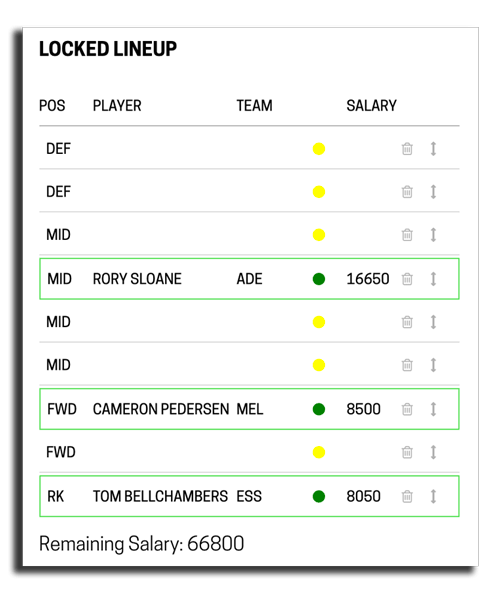 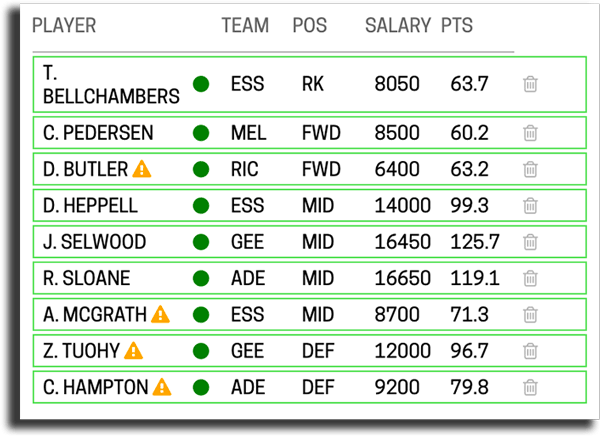 The cruncher will generate a stack of alternate lineups for you. You can enter them all into your pay-to-play contest (Shark Move), or if you just want to give it a try enter the one.

Hope this helps you on your way if you’re ready to start your career as a DFS Shark! Of course, CoachKings free play-at-home is also cranking thanks to Fantasy Insider for the Collingwood v Geelong game on Sunday.. get your teams in here for your free crack at the $500 prize pool.

Enjoy the rest of your weekend guys!

There are no comments.