The Dust is on the menu – it’s Brisbane v Richmond in an Easter Sunday play at home BELTER!

This is all thanks to great supporters Fantasy Insider who make it possible for us to dish out prizemoney to the six best performing plat-at-homers every Sunday.

Each week we’ll be crafting a CoachKings play-at-home team in this Saturday article by reaching into Fantasy Insider’s significant toolbox. We’ll use the predictive mathematical wizardry of their ‘lineup cruncher’ to build a winning 9 man squad. 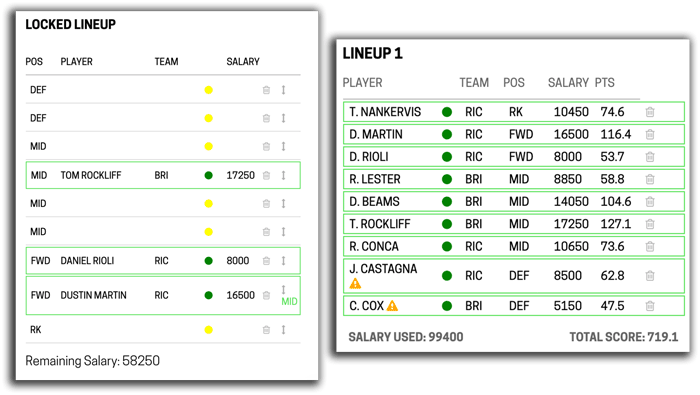 Before crunching, I wanted to make sure a few blokes were locked into my team, you’ll see I ‘locked’ them in before crunching above.

You’ll  also notice that I set the cruncher to predict player scores based right up to the top of their ‘ceiling’ this week. No stuffing around. With a competition of this size I expect each of my glistening warriors to be at their peak.

What does a man need to say to justify locking Dustin Bloody Martin into his CoachKings lineup? Has played one of the finest set of three games of footy you’ll see.. and did last week’s stuff with a busted cheekbone.

I love you Dusty. I want you at St. Kilda and yes, I’m pulling strings. He’s averaging 33 touches this season to date and I can’t see him being stopped against a young Brisbane team.

Looking at the stats, Brisbane is one of Dusty’s best opponents, he averages around four more disposals per game when he plays them. Lock.

Tackling. Tackling is where it’s at in this scoring format and there’s no prick more hungry for the man on man bring to the ground action that Tom.

Last time he played Richmond, in round 14 last year, he notched up 30 disposals and no less that 10 tackles. That’s 40 points worth on tackling brilliance alone.

I wanted to make sure any lineup the computer crunched contained The Rock this week.

Hands up if you saw the flower of this young Freak’s spring into stunning bloom last week?

Based on what I saw, Daniel Rioli has what it takes to become one of the best Rioli’s to play the game.. and that’s saying PLENTY.

Five goals in his first three games, and he could make a real splash against Brisbane’s ordinary defence. They don’t have the cattle to stop Richmond’s zippy new small forward fleet. Wanted him locked in at unders at this price.

Here she is folks. My Easter Sunday play-at-home squad. 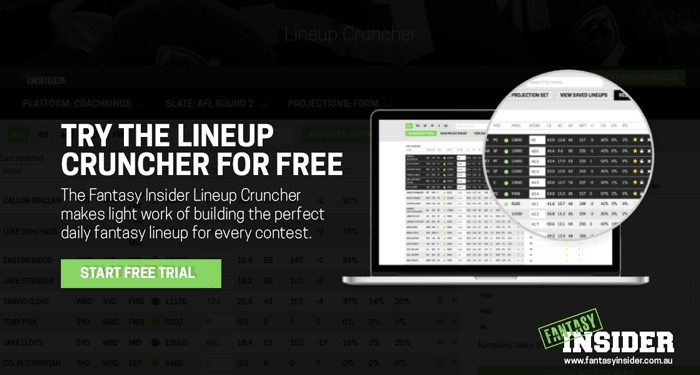 Dusty and TOBY are must haves surely

I'm gonna slot Menapoo in for a laugh.

You beat me to it. Maybe Coachkings is his game!

Footy is not his game!!!

Played Coacking for the 1st time. Was Ranked 500+ on half-time reverse Dusty and Beams to Rocky (Rev) and Griggs. Ranked 89 at full-time. Not a bad effort, bettet luck next week.

Nice work donk, hard to get a place at this gig.

Would have won if I checked my team and revved up the missus had me doing the bloody washing. Spewing

That's what ya get Billy.

Didnt get near it thanks to Rance and the dud rookies I picked.

I think I came in the bottom 5% LOL