Carlton & Essendon step up to the Sunday play-at-home plate this week!

Time for all of us to craft a winning 9 man team.

This is all thanks t0 great supporters Fantasy Insider who make it possible for us to dish out prizemoney to the six best performing plat-at-homers every Sunday.

Each week we’ll be crafting a CoachKings play-at-home team in this Saturday article by reaching into Fantasy Insider’s significant toolbox. We’ll use the predictive mathematical wizardry of their ‘lineup cruncher’ to build a winning 9 man squad. 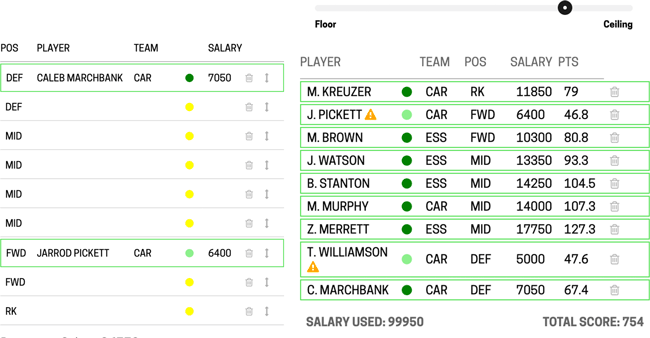 Before crunching, I wanted to make sure a few blokes were locked into my team, you’ll see I ‘locked’ them in before crunching above.

There are some things a highly advanced predictive fantasy analysis machine can’t tell you.

I’ve been trouser stretchingly impressed by the cut of Caleb’s jib. The kid was born with the rare and natural ability to read his angles. To read that ball coming into the back half. He’s one of the competition’s leaders for intercept possession and I can only see him improving this week.

His price is yet to reach anything like it’s eventual resting place. He’s at significant unders. I want him in my team.

Computers can’t look a kid in the eye and tell him he needs to pull his finger out either.

Pickett showed some very good signs during JLT, but he’s been rubbish over the first few weeks of the competition. He’s a small forward and he’s still young. They’ll always be unpredictable these kids.

This is Jarrod’s week. I want to back him in at this basement price to get the job done today. He needs to this week. He will.

You’ll notice I set the cruncher to predict player scores based closer to their ‘ceiling’ this week.

With over 1000 expected to take part in the contest this is a bit of a roll of the dice. I need my lads to play above themselves to get me the bikkies, so I’ve adjusted the cruncher to suit.

And so here she is. Behold the might. The power. Of my CoachKings play-at-home lineup Half my team haven’t scored a point yet!

I really suck at this game lol, gotta think about my choices a bit longer haha

Only finished 50 off the winner.
Revved up Dyson instead of Murph. Bugger. 🙂
Nice fun but.

Winner! Thanks uncle Jock, lots of fun…..little stressful towards the end