By now you’ll know that Fantasy Insider help to make this all possible and free as a bird. They’re the reason we’re able to give away $500 in prizemoney to the 6 best performing play-at-home CoachKings each Sunday arvo.

This week I’ve dipped into Fantasy Insider’s throbbing fantasy footy tool set to use their lineup cruncher to select my 9 man CoachKings squad for Sunday’s big one.

While I’m keen as mustard to support this great mob, I’m also bloody curious to see how these automatically crunched lineups perform.

I’m not smart enough to explain the statistical predictive genius that works behind the scenes at Fantasy Insider. But it’s science. And it’s maths. And folks win a crapload of cash using these things on the pay-to-play Daily Fantasy Sites.

I’ve gone with the last of the 10 lineups that were presented to me; 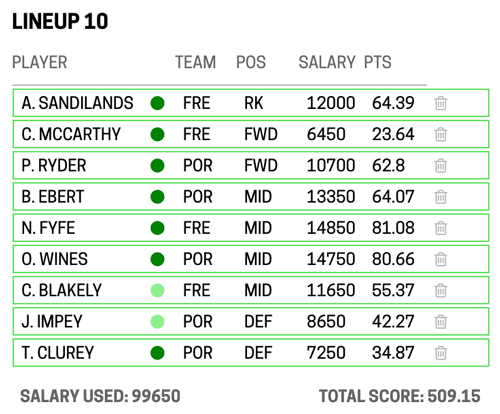 Don’t pay too much attention to the projected score of 509.15. Remember I’ve adjusted things towards player ‘floors’, which means they’ll outperform the projections shown 90% of the time. Significant.

I was attracted to this lineup for a number of reasons;

Look forward to your thoughts on your Sunday lineup below!

Fantasy Insider have a two week free trial on the go at the minute, they also have a SuperCoach ‘who should I pick’ tool which may arouse you.. jump on over and give them a crack! Great stuff Russ! As much fun as you can have with your pants on mate

Haha, you said it Jock…go the bloody Saints!!!

Gday Jock,
I just finished the play at home coach kings and came in the top 5. Was wondering how to claim my prize? Thanks

You will receive an email soon mate.
I know I did.

Great fun
Can't seem to at the moment to bridge that gap of about 60-80 points. close but not close enough. Should have probably revved up fine wine instead of teen wolf.