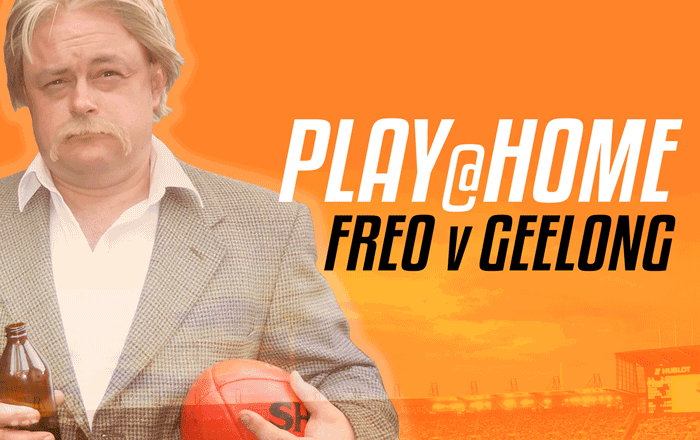 SUNDAY IS COACHKINGS PLAY AT HOME DAY ALL SEASON COMMUNITY!

We’re able to give away $500 in free prizemoney every Sunday this year thanks to Fantasy Insider, the number one destination for the Daily Fantasy Footy elite.

Fantasy Insider is the place to head for help with your Daily Fantasy Lineups, whether it be our completely free to play trailblazer CoachKings, or the pay to play versions of the Daily Fantasy Footy formats.

GET YOUR PLAY AT HOME TEAMS IN HERE!

We have had an important change to the scoring system you need to be aware of! This system is now the same as the AFL Fantasy and Draftstars formats, making it easier for new folk to get their heads around. Fantasy Insider have some ripping lineup tools aligned with this system so crack on over there for a special subscription offer quick sticks!

Onto my 9 man lineup for Sunday’s BIG ONE! Robust in the guts.

The first three blokes there speak for themselves.

Connor Blakely is my dark horse. I expect him to increase his game time significantly this year. His contested in and under mongrel is just what Fremantle will need this year. Watch this kid emerge in 2o17, beginning Sunday night.

Cam McCarthy (FWD $6400) will trot out for his first game with Fremantle. At his price he’s locked straight into my lineup. I’m impressed by both the abundance of his talent, and also the lustrous flair of his moustache. The moustache of his generation. Can’t wait to see him snag 2 or 3 goals.

Tom Stewart (DEF $5150) cut sick in the VFL for Geelong last year, and was cherry picked by Geelong to fill a key defensive role. Don’t expect a huge score out of Tommy, but expect him to significantly outperform his basement starting price.

Ready to play the real thing?

CoachKings is all about playing with your mates down at the pub folks! If you reckon play at home is the bees knees you’ll spunk yourself playing her live with your local community down at your local venue,

..and learn all about the $70,ooo of FREE CASH up for grabs in our in-venue Daily Fantasy Footy monolith! There are contests on the go every day of the footy season so get on down!

Look forward to your thoughts on Sunday lineups below! MANY thanks again to Fantasy Insider, get on over there and learn all about their advanced lineup crunchers! Gday there Russ! Nah mate, its a fantasy footy contest that lasts the length of one 1 game of footy. Jump in and have a stab at it mate. 9 players, $100K salary cap and off you go

Tassie and SA but no WA? Come on Jock at least give us an explanation rather than just pretending we don't exist.

Still working on getting that one pilot venue over there Adam. Absolutely haven't forgotten about you mate and working on it like a bull

Played my first game today Jock and got well schooled by the regulars, 471st out of 1014 on my first attempt…lol, at least I was in the top 50 % haha. Was lots of fun though Cheers Jock, why can't Supercoach get their live scores working as quick as Coachkings?

Jeez Jock I think you have spent one night too many at the printing press producing the Jock book.