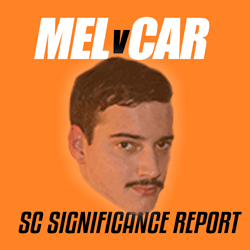 It was an ordinary day to be a Carlton supporter at Casey Fields today..

..but this match was jam-packed with Supercoach 2017 relevance.

We saw a truckload of premium selections running around as well as six rookie priced players. It’s hard to judge players like Hibberd, Murphy and the Carlton rookies, as today was their first game in quite sometime. We can however judge the fact that Carlton has a lot of work to do and Melbourne are going to be pushing for finals with a squad that finally has some depth.

In terms of Supercoach we have a lot to be excited about so let’s get into it and review some key player performances below.

I’ve had a look at some of the more relevant players in this write out but you can check out the Excel sheet reviewing EVERY PLAYER from the game here. (SC Scores to come soon).

Had a pretty quiet first half in the ruck. Pushed forward in the second and third quarter where he was able to take some contested marks and kicked 2 goals. By no means played badly and will almost certainly be a top 3 ruckman but I need to see a little more in JLT 3 at that price.

Had a really strong first half but dropped off after that. Still has influence on the game and provides an interesting POD selection. I don’t imagine he’ll make a lot of teams. Prefer his teammate Jack Viney.

Didn’t have a whole lot of the ball (18 touches) but was able to influence the game at stoppages as well as push forward and hit the scoreboard. I expect him to improve on last years average and he’s probably underpriced. Based on today’s game he’d be a good pick for the risk lovers out there.

Has just gone BANG! If you wanted a defensive lock then I think we’ve found one. Vince played a sweeping defensive role and was able to push into the midfield where he found 22 possessions at 81.8 DE%. He had 4 rebound 50’s as well as 4 inside 50’s. At his price and with the added bonus of being a DPP I’m very aroused.

Didn’t really have an impact today. Was just easing back into AFL football but I suspect he won’t be worth selecting. He could be a trap for owners this year so we’ll need to watch him in JLT 3.

A breakout contender through and through. Reminded me off Chris Judd or Patrick Cripps the way he stands up in tackles. He’s a big-bodied player who was able to impact the game throughout the day. He had 20 possessions and 6 clearances from stoppages, the Jock Reynolds Magazine has him touted as the next midfield beast and after today I can see it.

Played less than a half of football and didn’t make the most of his time on the ground. Only had 3 touches and I highly doubt he’ll be getting any games in 2017.

A rookie we’ve been keeping an eye on over the preseason. He struggled to find a lot of the ball (mostly due to a lack of forward half possessions from Carlton) but he was very efficient with his 11 disposals. Smith is currently in my defensive structure.

One of Carlton’s best players today. He had 23 possessions at 95.7 DE% and was able to push out of defence and play on a wing. Seemed to push up the ground in tandem with Kade Simpson. Won’t let his owners down but it is worth noting that Melbourne were attacking him at stages throughout the game.

Carlton’s best in the first half but dropped off after that (like most of the Blues). I love this man and he’s in my side as we speak, played in defense but like Docherty pushed up to some centre bounces. Simpson is a valid selection that should play 22 games in 2017. Had 22 touches.

Leading disposal getter on the field. Always seems to play better with Marc Murphy in the team. He had 20 uncontested possessions of his 28 so the return of Cripps should only help him. Will be a nice POD selection for those who go with him.

Had a really nice first half and was quiet after that, played in defence for the final term. Still had the 20 possessions and played well at centre clearances, hard to say whether he’s a good selection based off of today’s performance. Still need to watch him in JLT 3 (might get suspended for a love tap on Viney for JLT 2).

Had 10 touches in his first game for the Blues. Has a fair bit of work to do to play round 1 but I’ll be keeping an eye on him. Positive signs out of today…watchlist.

Started off with an amazing goal but only had four touches for the day. Will struggle to make the list but if he’s upgraded during the season he might be a cheap downgrade option.

Only had 3 touches for the Blues but looks to cover the ground well and applies pressure nicely (got robbed of two great tackles called for in the back). KPP so no relevance in Supercoach but he might be a bubble option later in the year.

Another Carlton rookie player who didn’t really trouble the stats keepers. Only 5 touches but kicked two nice goals in a row for the Blues. Potential to play some early games in the season although I’m not sure he can score enough. Watchlist.

How did you see it community? Petracca looked like Danger, an absolute weapon all day

was deadly in front of goals

Still no rookie to put his hand up

They'll show up, first hitout for most of them today

Totally agree with Bernie on the backline!!
He's pushed in front of Taylor Adams…… I still may run with both if TA can prove himself in his last 2 JLTs.

Think he deserves a mentioned looked pretty darn good from what I saw.

In the excel sheet

Please tell us what you thought of Marchbank lek?

Not a lot out of the game. Also nice spreadsheet Lek.

Vince I just feel like he is a trap could be wrong though, Viney is an animal nice pod, murphy will be better for the run.

There is no doubt Spencer is playing rd 1. Goodwin wants 2 ruckmen, so Gawn can spend more time forward. I still thing Gawn will be a top 3 ruck choice and therefore will likely be in my team.

Didn't Goodwin say that in a Interview few weeks back?

Yeah he did, I can't decide how this effects gawns output, It has to have a negative impact doesn't it?

I'll be surprised if Spencer plays. Most teams play 2 rucks in pre season with extra 2 spots. He would be a liability playing forward whilst Gawn is rucking

Marchbank played pretty well today, looks really composed down back and will be in the Blues best 18 no worries. Took some nice intercept marks and reads the ball very well. Had 18 touches and 10 marks, was able to push up the ground a little. $236K is a little too much for me.

Agree, too pricey, Prefer him to someone like Andrew Mcgrath however.

Nemo sat out the first half and a bit of the 4th qrtr as well. 10 Touches from his tog is good, excellent distributor in traffic and a long accurate left foot kick and knows how to get the hard ball despite only being 175cm. Shame that he's mid only he could easily make as much $ as Bowes/luggage/Mcgrath before byes. If he gets more time and more disposals in 2 and 3 he's a nice POD bench warmer

No scores from game yet?

Think Gawns output was negatively affected by strong wind blowing across the ground – very difficult for a very tall guy.

Will be different at Etihad/MCG!

Gawn was on fire second half of last year- very worried by Goodwin's 2 x ruck strategy.

Meanie of Me
Guest
Reply to  mikeg

I want to swap out max gawn but who should I get?

I'm sorry ben but that to me isn't a good team. A lot of choices I dont agree with

Lots of traps. Mills, Kelly, Billings, MIller (I ran Billings last year), try for a more guns n rookies approach or a least some fallen premos, over trying to pick that many breakouts…

How does Murphy play jlt3 if he gets suspended?

I think he plays and gets suspended in the regular season.

Who would you get in the forward i already have Dalhouse, Ryder, roughy, Black, Gallucci ( Smith, Eddy)

LetsGo
Guest
Reply to  The BONT

St Nick's been looking pretty good so far, also if you don't mind having 2 doggies players in the forward line Macrae is always an option

Trade out rance and but Bernie straight in?

Doch or Simpson better to invest in for the year?