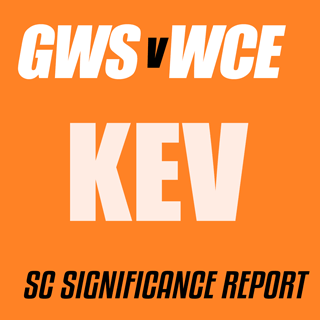 Mr X smashed his debut out of the park last night, spraying his significant SuperCoach intel all over the community.

It’s a must read in my book. Today we’re at the Narrandera Sports Ground (?) for the next match of the JLT Community series (??), henceforth to be known as the WCC (Who Cares Cup) for the next few hours.

GWS played a bunch of rookies and blokes that I have genuinely never heard of today against the Eagles. They were missing Mumford, Ward, Coniglio, Greene, Scully, Shiel, and Griff from their first choice midfield. Smith, Stevie J and Mr Paper Calves himself, Brett Deledio, from half forward. Heater also had the afternoon off.

West Coast didn’t exactly show up either. Leaving JJK, Priddis, Shuey, Gaff, LeCras and Darling home. Along with new recruits Smitch and Petrie. Which is just about every SC-relevant player West Coast have on their list.

A few of the kids stood out, Setterfield and Taranto in particular, but will they play early and often enough to make us cash?

You could look at his stats and say he had a bad game, but honestly he didn’t have a whole lot to do. That said, didn’t do himself a whole lot of favours to force his way into teams. 85% TOG

Looked a class above out there. 13 contested disposals in his haul of 29 @76%. Throw in 9 tackles, 7 marks, and 7 clearances it was a pretty fair day at the office. Pity he doesn’t have DPP.

Went virtually unsighted in the first half but was better as the match wore on. Played mostly forward while ruck duties were shared between Simpson and Downie. Avoid.

This man is a beast and will tear the comp a new one one day. Didn’t really get out 2nd gear but when you’ve got a rig like that why would you bother in a preseason game? 5 of his 7 marks were contested to go with 3 sausage rolls.

Will have a great year in the twos

I’m reluctant to get too excited about GWS rookies today. A LOT were missing for the Giants. Nevertheless…

GOT YOUR #SUPERCOACH BIBLE YET? SNAP ONE UP HERE

Sheed continues to tease. One of those awkwardly priced midfielders that might get a look in if he had DPP. At that price though you’ll need some significant, ball-tearing form out of him and I don’t trust him to deliver week-in week-out.

Sucked as all in in 2016. Made good use of the ball when he had it. Please don’t fall for him again though.

What the hell happened to this guy? I really rated him at the Lions. Had 9 tackles today but doesn’t get enough of the pill.

BOG for the Eagles. Was taking kick outs and played most of the game. Again, terrible price puts me off. Do you really want a guy called Sharrod in your team anyway?

You could throw a blanket over these awkwardly priced mids at West Coast. 24 touches but butchered it a bit. Won’t get much of a chance to shine when the big boys are back in the team.

I was excited to get a look at…

CHECKED YOUR SC TEAM STRUCTURE IN THE HIGGINATOR YET? RUN IT THROUGH THE RINGER HERE

You could be excused for thinking you were at an owl convention! There were just that many "who's"

Did well with what u had to work with Kev.
Scary though the Kelly gang reserve side would frighten a lot of teams in the season proper.

Was shattered Ward and Devon Smith got cut from the 29, Trig! Honestly no one that played today will come close to entering my team

I had his name jotted down before the match, hedski. Whisp of a lad, needed to put on more pressure

Spot on Kev, no fwd pressure for a small fwd? Pass.

Josh Rotham has been in round 1 conversations in the media but he panicked under pressure. No way is he playing in the big team, and if he does, he won't be in many teams.

Josh Kelly should make his way in to more teams. Forget starting your Beams or Murphy for 50k more you get an absolute stud who will play a huge role in the GWS midfield this year
Made his way in to my side

That's a good call, Nick. I'd wait for now and see how he goes with GWS' first choice midfield back. Pushed his average up by 18 last year, has he got another 15-20 left in him when you consider the guys around him?

As good as he was and is, not this year for me. Won't finish top 10 mid, so far Kelly and De goey will be trapping people, whos next?

Wont be touching Kelly. I had Libba in my team until I seen Watson only $453k – I have locked Watson in and thrown away the key.

Taranto & Settlefield will quinella the NEAFL Brownlow equivalent. Reckon they keep one of them & sell the other to secure pick 1 again who once visited a town inside the Giants zone & that makes him eligible. Mark it down in the book the Giants will win the flag & walk away from the draft with another pick 1. Gun key forward. The mob needs to speak. It's a joke

He will be up there hedski. No doubt. Surely there will be others too?
I have been an advocate of Williams for a while but maybe Wilson is the better HB runner.
I thought Patton was better than the abominable snowman today. Massive unit. Who else?

Ward was good, picked him up midyear.
Tempted by Williams but na.

is anyone considering doing a bruin manouvre with petrie or think kennedy will be freed up with the peetree there ?

Cloke may be a candidate.

Great write up, only thing i disagree with is being a bit harsh on Tiziani.

3 disposals 1st quarter 9 after 1st
1 tackle before quarter time 5 after
only 66% game time.

He won't play rd 1 and wont get a game but felt like defending him.

Anyway not a lot out of this game really.

Watson impressed me but won't play early, Kelly and Taranto and Mzungu all impressed. None SC relevent for me. I do however beleive there is a spot for Mzungu even if everyones fit, they didn't recruit him for nothing.

Fair call, CM. He was popping up everywhere early and I was scrambling like a mad prick trying to find out who #33 was. Didn't really notice him again till end of the 3rd.

Where do I find the SuperCoach points??

Oh Joshua Kelly, why couldn't you be the same price as JOM or have DPP?!?!

Killer write up, Kev. Knew the game wasn't worth staying up all night to watch. Thanks man.

No worries, TF. The score line flattered the Eagles. In a premiership game GWS would have blown them away. I'll be covering the battle of the bridge on the 3rd. Hoping GWS bring their A squad for that one

I'm sure they will. Hope that's a late game so I can watch live.

Ha! As a GWS supporter, I hope not, Hazey. But you're probably right if GWS doesn't hit the GF or doesn't get enough of mid time.

Is Daniel Lloyd an option for us this year?

Another one that will get pushed aside, Jordan. MID only in SuperCoach

I wonder who did the fixture and thought it was a good idea to schedule West Coast play in Narrandera. They did well to even turn up.

Agree with you, Loop. Read on Twitter why bother making the 8000km trip for a kick and giggle game. No wonder they had the team they did.

They stay in W.A for their next 2 games. Should get a look at JJK etc

That's where Hopper comes from and even he didn't turn up

Will Daniel Lloyd get a run in the season proper? Pretty handy score of 115?

Are West Coast the most irrelevant SC team this year? I have JJK under consideration, and that's it. A whole bunch of speculative mid-pricers and fully-priced premiums and it's tough to picture what role they all play. No Eagles for me this year I expect.