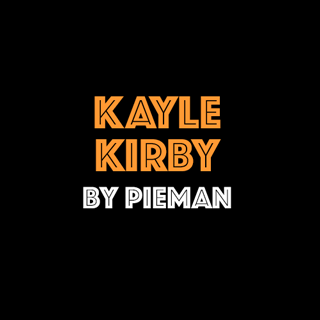 Fat bastards can get drafted.

Just about every draft that Derek Hine (Collingwood recruiting chief) goes to, he makes a ballsy pick. The best one without doubt was plucking a basketballer with a very limited footballing background called Scott Pendlebury.

At the previous draft the only one that hasn’t played yet was Brayden Sier. He used pick 32 on a bloke he’d only seen playing schoolboy footy. He didn’t play in the TAC cup & most of the other recruiters had never heard of him. We haven’t seen him yet due to injury, but he must be good.

But in this draft he took his ballsy pick into a new stratosphere.

At pick 50 he took Kayle Kirby. Who the F is that I said?

So within moments of him being selected I started looking into Kirby. The same thing kept coming up again & again. Fat, overweight, lazy but freakishly talented. I started to question Derek & what was he smoking when he picked this bloke. I wondered if he too had spent too much time with Buckley & was finally off his dial.

He was listed as 181cm & 96 kgs! An apparent turtle & hamburger munching champion. I was horrified.

I completely cast him aside until recently. Why did Derek Hine pick Fatso? So I went digging.

There was a reason. If draft picks were made on talent only based selections, then Fatso would have been one of the first picked. But what comes with him makes him the riskiest pick from the draft by some considerable distance. The likelihood of this backfiring is off the charts.

What can’t be denied is Fatso is a fair dinkum goal kicking MACHINE!

Estimated SC Av for 2017: Can’t tell with this bloke

So collectively he averaged a tick under 3 goals a game for the whole year.

I’ve had a look at his tapes. He is deadly accurate with his feet. And he knows where the goals are. He could kick goals blind folded. He can tackle well & he’s the quickest fat bloke I’ve ever seen. He also has great sense & knows where to be. He absolutely oozes talent & class from his eyeballs…..

Draft night for the Kirby’s was interesting. Most families of prospective draftees have at home draft party with friends & family.

They were all down at the pub. Whilst Kayle, his brother & a mate were anxiously watching the draft in the sports bar, the rest of his family were too busy tossing coins into the pokies.

When Fatso saw he had been picked by Collingwood he ran into the pokies to inform his family. They briefly stopped to offer congratulations, told him to go & buy himself a drink & resumed slot jockey positions. Poor bloke didn’t even get a shouted a beer.

So. All of a sudden the riddle of how Kirby got so fat in the first place became perfectly clear. He certainly does not come from a house of discipline. In fact his family has a rather “interesting” history. I’ll just leave that right there. Fatso played for the Bendigo Pioneers in the under 18’s TAC cup. He enjoyed a stellar season booting 32 goals from 13 matches. He was the 4th highest goal kicker in the TAC cup in 2016. With 2 games to go in the home & away season the Richmond Tigers VFL team were desperate for wins to make the finals. They activated the 23rd man rule & called up Fatso for a cameo.

His debut game was sensational. At half time the Tigers were in trouble. The Zebras were dominating. Fatso provided a spark. He booted 3 3rd quarter goals to get them back in the game. Then coach Craig McRae decided to isolate him in the forward 50 in the last quarter. He kicked the only 2 goals of the last quarter & won the game.

They needed to win the last match & have results go their way to play finals. Fatso played his part. He backed it up with another 4 goal haul in a comfortable win. But it wasn’t enough to get the Tigers into the finals. They finished 9th BAHAHAHAHA

VIDEO: Meet Kayle Kirby – https://t.co/QlaA66vRGv Our pick No. 50 talks about the move to Melbourne + how he spent draft night #startsnow pic.twitter.com/OK8x5Sgd6P

Fatso will not be playing for the Pies round 1 side. He’d need heaps of injures & loads of lean cuisine. There will be too many ahead of him early on. But if he can find a way to get into some reasonable condition & he keeps kicking bags then he might well loom as a downgrade option at some point in the season. The Pies have a history of giving the draft picks a crack at some point the following season (if there fit).

Geez. Where do you start. First of all it was a MASSIVE risk to pick him in the first place. He’d struggle to beat Joffa in a beep test & his family isn’t the Brady bunch. It seems that sometimes the baggage that comes with these brilliant indigenous talents is too much. When things go pear shaped with these lads it’s always family related. This could easily turn to disaster.

The answer as to why Derek Hine picked this man is clear. If the bloke can kick so many goals as a fat bastard, then what is he capable of if he’s fit. It’s a risk worth taking but I don’t like the odds of it paying off.

I’ve been trying to find some info from the Pies about his progress this preseason. Since the story of how his family celebrated his draft night broke not a word has been written on him. But they haven’t mentioned much about any of the new draftees except for Callum Brown.

If the stars align then boy he could be a decent downgrade option later on. The Pies do like to play the kids. Last season they blooded Ben Crocker Tom Phillips & Rupert Wills who were all serviceable. I expect all of Sam McLarty Callum Brown & Kayle Kirby (if he’s fit) to get an opportunity at some point. Josh Daicos I’d consider unlikely in 2017, he’s got the opposite problem to Fatso.

Put Fatso on the watchlist. You can’t miss him

Hahahahaha ripping write up Pieman. Kirby a big fat No for me! well lets just say unlikely, the rollercoasters are reserved for theme parks.

I've been reading fantasy articles for years now and never commented, but that sir, is the finest piece of AFL Fantasy Profile writing in history. And I also really hope this bloke fulfils his potential.

Great yarn. Given that he wont play unless he loses weight he is almost a must if selected at any stage

Given his background, think Fatso is a bit rough. Excellent article, my man. On the watchlist for preseason and see what magic he can do at the next level.

Funny stuff INP. wasn't he in a movie with Austin Powers?
Sounds like he has talent up the warzoo. If the pies can whip him into shape will consider as a downgrade down the track.
As he goes alright on the tooth fitting he ended up at the pies.
Brown was penciled in for a rook early start but scratch him off. I've had glandular fever and it really knocks the stuffing out of you, you r just so tired and sleep all the time.

It takes a long time to recuperate so wouldn't expect to see him until at least Rd 8. At that time might be a handy cash cow exchange

Dunno if Kirbs is cut out for the AFL gig. He has a lot of work to do as well as some likely family and personality issues that may arise due to the back story. There's a diamond in the rough and then there's clutching at straws.
I think he's the latter

You don't average 97 in your second year without being a gun!

Won't be ready until round 4 according to reports, so we'll get a look at him before deciding whether or not to jump on.

Thoughts on Shuey and Wingard

Did a write up on Shuey, Pieman. Upgrade target. He's been better post bye for the past 2 seasons. Giles factor as well, I don't rate him at all

Joe, he is working very hard on his fitness.
I'm his older brother and all I can say no one knows shit about Kayle or this family.
so Pieman needs to actually meet our family instead of making assumptions.

Being a Pie follower myself I hope this guy stacks up for us, Sounds like he has the goods and all he might need is the right mentor to get his head right into the AFL way of things. If he fires early either in JLT games or the 2s early in season id expect we might play him Anzac day, seems we like to play a newbe in that game.

Biggest no of all the pre-season for me INP but by far the funniest write-up, and there's been a few, fantastic work.

LOL what a bunch of Idiots.

for some reason i missed this article earlier. i'm glad i found it now. Gold Gold Gold.

Funny stuff Pieman. Of course you will now be able to claim him as "your man" when inevitably he makes an appearance. Hine is a magician, so go with him I say.

Saw him play last year, absolute gun, was hoping he end up at the tigers, goal sense going at crazy levels!!

Maybe if you are going to talk about the Kirby family you should research us. kayle's brother & I are very successful people as are our children so why do you not find something positive in your life and focus on it xx

Well said Bec give the boy a break and his family judge him on his performance , playing in the afl is not easy