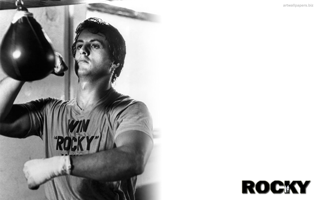 No not Tommy Rockliff , this Rocky

When Jake Lloyd was just 13 his father Tony started him in fitness training with former South Sydney and Parramatta conditioning coach Jimmy Wright. And we’re not just talking a few light jogs here. Workouts included squats, push ups, Jock Reynolds burpees, speed ball work and sprint work as well as runs up near Mount Arapiles. Coupled with this was a strict diet and sleeping regime (except when Jake was woken up at 3am by Jimmy for a training session).

Some would say this is borderline insane and pushing the boundaries , but whatever your opinion the proof is in the pudding. Jake is an incredibly fit (and equally importantly) and emotionally strong young man.

Early on in the season Lloyd played predominantly as an outside midfielder . And while his output wasn’t overly bad, an average of 80.7 before the bye wouldn’t be deemed as overly relevant, especially considering he wasn’t a dual position player in 16 .

However then came what can often drag a player into relevance , a role change . John Longmire decided that Lloyd was a good enough ball user and had the decision making abilities he needed off half back .

What then transpired was a 9 round average of 90.1 to finish the season , along with a handy average of 91.25 through the four finals .

Average touches also lifted from 23 to 25 , but more interestingly for us supercoachers was the increase in kicks from a meagre 12.9 pre bye to 17.5 post bye. When you think of every quality defender you think of a kick to handball ratio , and it jumped sharply from 1.2: 1 to 2.16:1 .

What all this shows is if this half back / wing role continues we can expect (hope) that Lloyds average at the very least stays consistent at that 90 odd average he accrued from round 15.

When I look at the first page of SuperCoach defenders this year I see Docherty, Simpson, Shaw, maybe Adams and Burgoyne . Then I see a lot of mid priced ‘potential’, and that’s all it is. Beyond page one, a lot of ‘could be relevant’ types . Think Williams , think T Mac , think Tuohy, think Hartlett, think Lloyd.

These are the type of players that always tease us, oozing with potential, but always fraught with Danger.

Will  Lloyd be able to continue evolving into his half back role and become a master accumulator? I believe he has all the attributes to play this plus one role that Simpson, Heater and co have played so beautifully for us over the years. But unfortunately until we see pre season this is just a pipe dream, and there lies the risk .

Durability is no issue , nor is his security in the team . As mentioned above Lloyd is a super hard worker and has adjusted to every role thrown at him so far, a great utility player.

Typical breakout contender. 23 years old, fourth season, a spike in average each year. He has all the things were looking for, but so did Kade Kolodjashnij. Remember him??

I’ll be watching his JLT cup form to see if they continue to play him in a SC friendly role as a plus one .

Nice write up Bont. Awkward price.
One thing for sure with a training regime like that you cannot argue with his dedication to the sport or cause.
I haven't considered Lloyd and probably wont as I'm going with a GNR defence this year as their appears to be lots of rookie options down back in 2017.
Speaking of rookies the AFL has just released an article on who is flying in the preseason and is shaping at this early stage for Rd 1 debut or early games.
I have just put one name next to each club but go check out the article if you want to know how all the rooks are going:
Adelaide: Galluci
Brisbane: Mcbags
Carlton: SPS
Collingwood: Brown
Essendon: McGrath
Fremantle: Logue
Geelong: Stewart/Parfitt
Gold Coast: Ainsworth/Bowes
GWS: Tarranto
Hawthorn: Morrison
Melbourne: Smith
North Melbourne: Williams
Port Adelaide: SPP
Richmond: Graham
St Kilda: NOMCOC (GR8 handle INP)
Sydney: Cameron
West Coast: Petrie. Rookie – NOMCOC II
Western Bulldogs: English

So big mix there. Some nice cheap rooks and some excy ones.
You don't go high in the the draft unless you can play. Showing why already.
If they play early might just be worth spending those extra $$.

I don't mind Lloyd. I think you've got to ask yourself what you want to get out of him. Stepping stone or keeper? Patch has torn the SuperCoach world a new one with his article on midpricers. At Lloyd's price and a 90 average he will get up around 500k, not enough as a stepping stone and unlikely to be a top 8 defender.

Ceiling is also a worry.

Nice write up mate. Tell me, where did you get the inspiration to write said article??

Interesting proposition this Bont. I'll give him some thought during the preseason games if I'm looking for a POD. I'm not sure he's going to be bye friendly for my team. And that's going to be important. One thing is for sure we are not struggling for defence options this season. They are everywhere. Great work Bont

Off The Bench
Guest

Great article. Was a solid no until reading this. Watchlist for now.