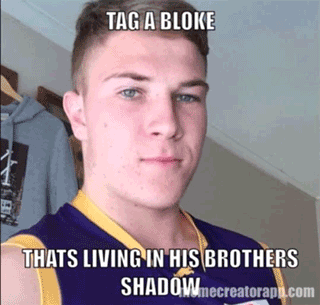 The brother of Brad arrived at the Crows at pick 23 in the 2013 national draft after absolutely dominating, and I mean DOMINATING, in a fairly ordinary North Ballarat TAC cup side. Over 7 games he averaged 37 disposals (16 contested), 7 clearances and 5 tackles. However, leather poisoning a broken hand stuffed his U18 championship for Vic Country, managing 42 touches over 2 games.

His first two seasons at the Crows yielded 23 games and a measly one Supercoach ton. Overall, his average for those two years sat at 64.9. His brother Brad smashed his first two seasons at the club. It totalled 25 games, 10 tons and an average of 92. The comparisons between the two started to roll in, fair enough too, anyone with a brother or sister will have fond memories of growing up together and trying to get one up on them at every possible occasion. In fact Matt rocked up to the draft combine with a shiner after Brad had clocked him one. Matt had let down younger siblings everywhere, in most cases the youngest is so much hotter, talented, and just generally an all round better human (Hi sis!)

2016 looked to heading the same way for the younger Crouch with only 2 tons up until the bye. The it all started to click when he was finally moved into his preferred inside mid position. 5 tons and only once under 80 from 10 games. If he stays in the coalface for 2017 he will be a very relevant midfielder.

I can’t stress this enough, Matt Crouch needs to be at the foot of big Sauce Jacobs to be a worthwhile pick for Supercoachers. Rounds 1-12 he was just another cog in Adelaide’s midfield, after the bye he was shifted to the inside man.

The obligatory “Scott Thompson will spend less time in the midfield” news article was released in late December. I think there’s been one for the last few years now. Looking at the numbers though ScottyT did spend less time on ground in the second half of the year.

You’ll notice the decline of Thompson’s TOG% didn’t see a spike in Matt’s. This leads me to another risk factor, the guy has a similar aerobic capacity to a pack a day smoker. He isn’t the quickest guy going around either. It’s a bit of catch-22 scenario, this guy is an absolute magnet when he’s on the park but he’s only playing 70% of the game.

Your classic breakout player, albeit a bit on the pricy side for a true breakout contender. Crouch gets so much it that he often pushes 30 possessions a game. His d.e% of 73 is very good for an inside mid. A 110+ average is very gettable for him as long as he spends all of his time on the inside. He’s a wasted talent playing outside the packs.

Matt Crouch is a died in the wool KISS fanatic – Keep It Simple, Stupid – His game is contested possessions and tackles. That’s it. There’s nothing wrong with that, it’s a game that is very hard to stop even with a heavy opposition tag.

The verdict on midfielders is so hard because we have premium talent available at the top end and in the mid price range. Matt may find his way into your side as you play around with mid structures but he is not ready yet to warrant a starting place in your side.

Of all the break-out mid options, I like Matt the most.
His brother can't stay on the park. Dylan Shiel is competing with half a dozen other gun mids for touches. Ollie Wines is slow. Jack Viney will hurt himself (along with everyone else). Tom Liberatore will be coming down from a three month bender for the first half of 2017.

Matt is a contested beast and presents value. My qualm is he will not finish top 10 and won't make you more than $70k. Therefore why bother starting with him?

He's been in and out of my side more than any other so far, Steeeve. I usually go fairly conservative in the mids but I've just got this feeling about him

I'm the same Stevo – looking at him very bloody closely. Job security now 100% imo – and all the kid needs is 8-10% more game time to reach uber status. All about his game time.. I'll go close to selecting him.

Shouldn't let you down completely barring injury. Might only average around 100 which wouldn't be enough.

At that price I'm also very tempted by Gaff.

I drafted in gaff last year. It was a……. Gaff. IMO with no Nic nat or Lycett to start I think you could hold off on WCE mids to start and maybe get a cheaper upgrade mid season. Not sold on Giles or Vardy feeding the engine room – well until I see them ruck again.

The Stiv
Guest
Reply to  Steeeve

Only thing is he's nowhere near the quality of any of those other players you just mentioned. He is a ball magnet though and plays a SC friendly style of game.

Another great write up Kev. I happen to have written about Brad and came to very similar conclusions to Matt about his best spot (inside mid under the ruck) and what he needs to do to increase his scoring (more marks, more kicks & goals, less handball). Very interesting. I think Matt edges out Brad purely as being less injury prone (for now). Although I'm unlikely on either. Could you go in with both brothers…there's a crazy crazy thought!

I was actually surprised Matt managed 20 games this year! Wasn't injured just needed a rocket under him to get amongst it. His numbers show a steady increase over the years, whereas Brad started with a bang and has stayed more or less constant.

Look forward to your write up about Brad

Your point about the awkward price is the most telling. For 10k more you get Heppell. Pass

Thanks Kev, quite insightful, particularly re TOG. Seriously considering now. Hopefully his TOG will improve with another pre-season under his belt. I think that (TOG) is the key to where the arousal may lay / lie (whatever) for a breakout.

Excellent again Kev. I'm not ruling him out at this stage. But he's unlikely. There is no doubt some availability in the crows midfield. Plenty of it truth be told. If Adelaide is to have a decent crack the crouch brothers will need to step up

Cheers, Pie. I'm talking myself into him, but it's just numbers on a page right now. Big believer in gut feel. Gagging for some footy, need to have a look at him.

There should be a countdown clock to the NAB. Too much info in the head…need to see some ball to make sense of it all (2pt rhyme bonus)

I wouldn't come close to the mathematical genius that is Higgo, but I'll have a crack at some nerd stuff re: rounds 14-23

What's really intersting – and this is a truely magnificent article Kev – contested possi's and clearance went down in the 2nd half of the season but kicks and handpasses went up. Smell something else at work here.
I'm keen on crouch though. Just not sure I'll have him over others at this point.

I'm keen on Matty C. If his TOG goes up, think he'll be able to crack 110. And the Crows will need him to step up. If I have to pick a POD for my mids, he's topping the list at the moment. As always, a fantastic read, Kev!

Anyone believe the talk that Laird will play a lot more in the middle, probably as an outside mid?

Nah, cause replacing Laird across half back with Scott Thompson is one of the more questionable things I've ever heard of happening.

He might get some minutes, but there's plenty up in the air at the moment with who gets what midfield minutes. If Knight is there then he's a bit of a duplicate of what Laird would provide in the middle I think.

Just a thought – maybe the crows will dodge interchanges by rotating mids and backs more.

It's possible, but again, moving Thommo across half back sounds like a recipe for disaster to me. If you had Hampton or Seedsman as the ones rotating back then that's fine, but neither of those blokes will be firmly booked in the 22 yet.

Pyke has talked of using every forward bar Tex through the middle too. Cameron might get some more minutes, and they have the set play with Betts off the back of the square, but again, it remains to be seen how much of this is talk and how much will actually happen. I don't think Brad Crouch would be particularly effective up in the forward line. Needs a good look over the pre-season I think.