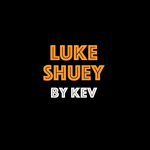 Will 2017 be the year that Shuey finally hits ultra premo?

To perform a shoey, the drinker either removes their own shoe, or nominates a friend’s shoe to be used as the vessel.

The shoe is tilted and the entire contents of a can of beer are poured into the shoe’s opening. Once the beverage has settled, the beer is drunk by tipping the shoe up to the mouth and chugging it. – Wikipedia The real Luke Shuey logged a good season in 2016. Averaging a tick under 26 disposals (12 contested) at 74.5% d.e. You can usually see him front and centre with Matty Priddis, extracting the footy 6 times per game and laying the same amount of tackles. Unlike Priddis though, he knows how to kick the thing. Almost half of his average possessions are kicks.

However, Luke has been taunting us with his talent for years now. Never quite kicking on from a solid season, instead slipping and posting a shit one. He played a full season in 2011, his second year at the Eagles, averaging 94.6. Since then his average has risen above, then dipped below, 100 every subsequent year. He averaged 105 in 2016, so, using history as our guide, 2017 should be his ‘down’ year. Can he buck the trend?

There’s a few community. As mentioned above, history is not on his side in 2017. If his formline continues he’s looking at a sub 100 year. I’ve noticed a bit of a trend emerging with Shuey in recent years in that he comes home strong. His starting price for 2017 is his ceiling, picking him up after his bye makes him a nice little POD option for the run home. 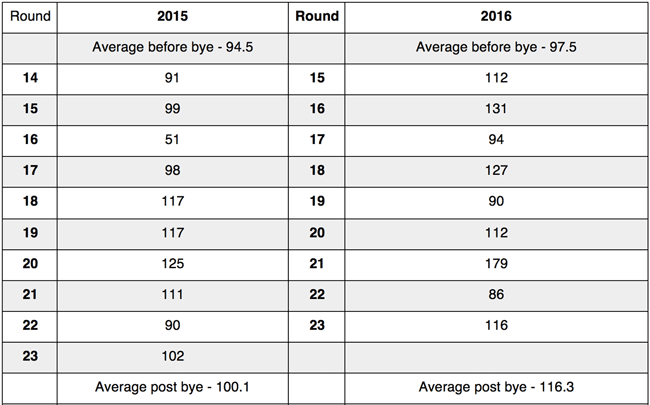 Take out that 51 when he was tagged against the Pies and his post bye average jumps to 106. He had shed 63k from his starting price in 2016 by the time West Coast had their mid season break. If he repeats that then a possible 500k Luke Shuey in 2017 is a tantalising option as we’re looking at having our team at full premium post byes.

If you choose to start with him then stick it out. 570k is a lot of coin to part with and unless his form takes a huge dive or he gets injured then I wouldn’t trade him.

A better option will be look at him when it’s upgrade time.

Don’t start with him. Monitor his early season form and see how he’s travelling up until his bye.

I started with The Shue in 2013 or 2014 I think it was. Never again. Can't see the bloke push that head of his up through the ultra premium ceiling. Kev – thanks so much for yet another rock solid write up mate. You're on fire son

There's just something about him Jock and I couldn't pin it down. Loves the contested stuff, tackles, clearances… but his fantasy scoring doesn't reflect it. A mental thing perhaps?

Loving giving back to this great community!

Agree Bont. Under 500 will be tough to say no

As an Eagles supporter I am very excited to see the impact Mitchell will have on shuey. Shuey has all the weapons and can see him getting a lot more outside ball with Mitchell and Priddis on the bottom of most packs.
Think he is a chance to finally push 110 but why take a risk with so many other obvious and underpriced options in the midfield. Not really worth predicting a breakout in the midfield.

Reckon it will benefit him, Daizy. Problem is SMitch will only be around for a year. Shu will be fools gold in 2018

Sam Mitchel is a GUN. Massive loss for the Hawks and super gain for the West Coast.

Bang on the money Kev. No Nic nat is huge, but I'm tempted by the shoe, but that's about it. Tempted. Watchlist.

Just too many good options in the guts. Short can neck one, as his name suggests.

Nice write up Kev, but a very unlikely starter.
The Weagles will only have Giles as their #1 ruck for first 2 months or longer so the mids will be sharking off the other ruckman most of the time and im giving their mids a wide berth to start with.

Eagles have North round 1. Goldy C

Great job again Kev. Pretty sure I'll be roling the dice on some value in the mids. The difference between his best & worst scores is too great for my liking. Agree with your verdict

Cheers, INP. There's just no consistency about him. Only twice under 80 is a positive, but his scores go either side of 100 week-to-week

Interesting approach you are taking with mids Pieman. There ia so much value on the other lines i think this might be the year to load up in the mids. Great article Kev but Shuey is not one of mine. Good player but dont see him even top 20 in SC

Thanks Kev, I'm with Daizy on this one. Keen to see what happens with Sam Mitchell in the middle. May be Sam will be firing 15 handballs a game to an unattended shuey so that he can bang the pill deep into the eagles forward line or even through the goals? One more goal a game will make a significant difference to his SC merit.