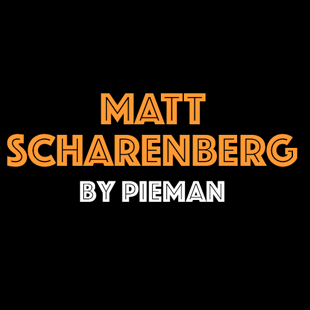 Never before has this Pieman been so excited about a recruit to the CFC. In 2013 the Pies traded their way into position to snare the sublime ability of Matt Scherenberg.

In June 2013 Scharenberg’s draft range was pick 1-5. He was considered an elite talent that could play anywhere on the park. He was though thought to best suited as a rebounding intercept defender with elite disposal on both feet. Unfortunately those feet were the beginning of a nightmare run of bad luck for the young prodigy.

What was thought to be an injury that required rest, resulted in the sesamoid bone being removed in both of his feet & his 2014 preseason ending in ruins. It took many months for those injuries to heal & in his 5th game of VFL football in August 2014 disaster struck again. In a Friday night VFL match against Bendigo Scharenberg did an ACL.

After 12 months on the sidelines Scharenberg played 4 AFL games right at the end of the 2015 season. And whilst he didn’t rip games apart I liked what I saw. Composure & skill.

On the back of those games Scharenberg hit the 2016 preseason full of optimism. But it wasn’t to be. Whilst partaking in a standard training drill disaster struck again. This time it was his other ACL.

There was a reason Chocco delivered that assessment on Scharenberg as a junior. He was Mr Versatile who could do anything & do it with class & precision. His lists of strengths in his draft year were astounding. His weaknesses were hard to find.

Truth be told, how would you like a cheap player with these skills in your supercoach backline:

As a cheap rookie coming into his 4th season the Pies want & need this investment racking up the pill & hitting targets. His purpose will be simple. Quick cash before he breaks again! But if he can stay on the park, who knows where the ride will end.

2 words. Jonty Scharenberg. The young fella was a certainty to get drafted. But it didn’t happen. Then he was a certainty to get picked up early in the rookie draft. But he was overlooked again. Why you may ask. Well Matt Schaerberg isn’t the only sibling to have suffered from serious ACL injuries. The eldest of the 3 Jake has suffered the same fate. And Jonty was a victim of this family history. Don’t expect Matt Scharenberg to hang around for the season.

Had assumed it was a joke but I got your card today in the post, the wife's been looking at me suss all evening https://t.co/y2tqO8ArEf

I’m not keen on the hopes for the Pies 2017 season. But make no mistake the Pies want this man on the park desperately. He’s too good to have sitting on the sidelines. And he’s far too cheap to ignore.

If he gets through preseason & is named in round 1, he’s a lock. No If’s buts or maybe’s. And put him on the ground.

One of the great community men. Chat with him in the comments below

Desperately. Desperately. Absolutely desperately want to see this kid on the park in 2017. Would be one hell of a shame to see a talent of his ilk lost to injury. I'm with you mate – preseason.. few games in the sticks.. named round 1 and he's in my team. Ripping write up as per usual mate!

Cheers mate. I'm just praying he can get through a preseason & showcase the sublime ability. Would make a huge difference to the Pies

This is one of those players that works being an American. Never seen him play and don't trust anything that these eyes hasn't seen mix it up with the big boys. But the Pieman is a keen evaluator of talent (e.g. first on Caleb Daniels train) so I will pay mind to him preseason. If he goes 2-3 NAB games and looks like he belongs, the price is indeed too good to pass up. If he's as good as you say, we'll only need him around 5-6 rounds. Great review. Hats off again, my friend.

Hasn't caleb Daniel left 17 sets of recruiters red faced. I'll never forget that review, I knew he wasn't just good, he was a weapon. Bevo doesn't mind him either. Scharenberg my friend is of the same ilk if he can get out there. Time will tell

"If he gets through preseason & is named in round 1, he’s a lock. No If’s buts or maybe’s. And put him on the ground."

Pretty much, Pie. 164k is a friendly risk v reward price given his injury history. If he goes down early there should be another cheap back available. Hopefully he can hang around long enough to make us 200k+

Any rookie that makes 200k gets a big pat on the back. If he can stay on the park it won't take long Kev

Nice one. Like u INP I have had my eye on the lad for awhile.
I think most years he is in my initial squad until lady fate intervenes and leaves us all with a big FU fellas.

Once again in my starting squad time will tell if he starts Rd 1. Surely his luck has to change?

I thought his brother may have got a go as a rookie injuries or not.

p1ss weak knees in that family.

Always in my preseason team until one day I pick up the paper & he's stuffed again. Hard luck for jonty. Staggered he didn't get drafted. Even more so when he missed the rookie draft. Hopefully he carves it up somewhere & gets a crack

Yeah thought he would go in the Draft
Or
Jonty was a monty for the rookie Draft.

But the rookie flavour of the month was the ol' backup Ruckman.

Funny stuff in the opening stanza there pieman.
He and Keefe are locked in. I hate Keefe. But he's too cheap to pass up.

Bombers get 10% & Keefe & Thomas get slashed huge. How does that work?

Great review this. But it kinda made me think hes not worth it. Just can't see him stringing 7 early games together to make that 200k. Also, I think there's plenty of talent in the defensive rookies this year to pass on a more expensive one. I'm looking at a 5 rookie defensive setup this year and i think if you go down that path they must be reliable. McGrath, Berry, Keefe, Stewart and the Freo mature ager from Coburg all look good. Hibberd from North should get a look in too.
Of course if he tears up the NAb he's in.

Cheers Jack. I think there will be some decent defence options. Scharenberg will wipe the floor with keefe for scoring if he gets out there. Luke Ryan is the bloke from Coburg. I'll cook up a piece on him soon

Is the hype surrounding this kid all from him beating up on 16 y/o opponents a few years ago? He did not do particularly great in the VFL in 2015, according to the one-liner AFL player ratings reviews below… At the 160k price point he needs to be bringing home +10 ppg compared to a cheapo rookie, not sure if I see it happening from him this year.

2015 Season
1Knee.
2Knee.
3Knee.
4Knee.
5VFLManaged through game on return. Looked good in patches.-
6VFLContinues to get better with more game time. 21 possessions.-
7VFLSix marks at half back as get edges towards full fitness.-
8VFLBye.-
9VFLNearing full match fitness. 22 possessions, five rebounds.-
10VFL21 touches roaming across half back.-
11VFLDid well at half back in big win over ladder leaders.-
12VFLBye.-
13VFLSteady effort in defence.-
14VFLOne of his better games so far. In everything in first half. 22 touches.-
15VFLNot his best game at half back. 16 touches.-
16VFLSteady down back without setting the world on fire.-
17VFLOK at half back but didn’t seem to extend himself fully.-
18MelbCrunched early, had nine second-term touches. Solid debut.7
19CarlSub. On at three-quarter time and had nine touches.3
20VFLResponded well with 23 touches and three rebounds.-
21VFLGave away centimetres but competed strongly down back.-
22GeelMenzel gave him some trouble early and was moved. Cool customer.4
23EssContributed from half back. Will he be in black and white in 2016?5

If there's 4-5 ripper defender rooks at basement he may not be required. But I think there's 150-200k upside in his price. Perhaps more. See what happens in the nab

Hoping there might be, eg Hampton, Berry, Stewart, Ryan, Newman are all reasonable chances for R1 selection. But as you say the nab will tell all.

Ryan Newman & berry im keen for a very close look at. Another will surprise us for sure

Yes. Will depend on other defence rookie options.

Could be a heap of def options at lower prices, you would expect McGrath to be in rnd 1 and iv got him ahead of Shaz at this point in time but if a cheaper option comes along ill leave McGrath out.