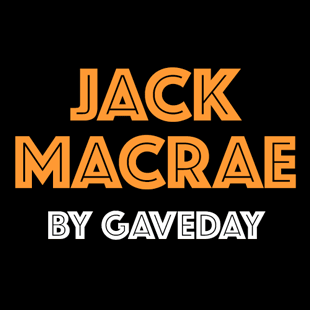 The POD that should not be.

The Bont, Libba, Johannisen, The Package, even Skinflute Minson seem to get mentioned more in Supercoach & AFL Fantasy circles than Jackson Macrae.

And I thought it my duty to correct this neglect.

And somehow this man only ever peaked at 0.8% ownership last season.  I know, I didn’t have him either, but the more I look into it, the more I think Jackson Macrae might be essential to our plans.

This kid doesn’t get the headlines he deserves, maybe it’s his lego hair or a lack of tough stamps that puts him under the radar. I don’t know. But it’s not like he’s averaging 200 and we’re all mugs. So why the indifference?

Last season Libba was cheap as chips. And that would’ve done it for most Supercoaches as far as midfield dogs go…….Then from mid-season the Bont stepped up grabbing our attention. And finally in rd19, Jack’s hammy went twang. No trade for you!

Really, only two I could think of – Too many dogs to take the chocolates or not enough time in the guts capping his output, but the latter may open up the possibility of DPP status……

You love a POD, you believe The Bont will cop a heavy tag and Libba won’t sober up till June. You’ll want to save yourself around 100k on an elite output midfielder to use strengthening other lines.

I so desperately want to believe that I’m right in saying that he’ll explode in 2017, but I cannot honestly say he’s a YES to you community, unless he gets DPP or knocks out a few early tons. It’s that simple.

He’s a really good chance of DPP I reckon as his forays forward are well documented, but SC has chucked us curve balls before. So until then….

*note from Jock.. he’s since been given FWD eligibility which makes him VERY interesting.

Great write up gaveday .
Only one problem with Macrae for me , he's moving in the wrong direction score wise .
His average has dropped every year, with the emergence of the Bont and the move of Dahlhaus/hunter rotating through the guts , Libbas return; all these things have seen McRae ever so slightly pushed out of the fold as someone who spends large chunks in the middle .
It's a shame because the kids a damn good player . Will probably average in the 90s again this year but not enough to fork out 508 when there's so many midfielders to pick from this year .

I'd definitely consider him if he had DPP. But I can't see that happening. It was a long time between drinks for a goal celebration. He kicked one in round 1, but had to wait to the Prelim for his next one. Can't see a DPP inclusion based on that. As a mid only there's just too many other good options. He's still young but & perhaps a bloke to consider in the years to come. Agree with your verdict of No for now. Nice work Gaveday

Im a dogs man pieman and i reckon his scoring his hurt by his conservative ball use especially in the fwd half. Finds himself in good positions but is probably a bit too unselfish at times. But I think thats a problem that can be corrected. I believe a goal is worth 8 points (correct me if im wrong) so adding a goal a game gets him to the 107-108 range and he vecomes a great selection.
I wonder if anyone has his finals scores, was much better in terms of score involvements I thought and might give a better indication on what to expect going forward

Yeah thats a fair point about his goals, but even getting his score involvements up by being more direct rather than squaring it and kicking sideways would help. Was particuarly good at that against hawks and got a 140, more of those would be nice!

The 140 was nice. But it was his best score of the season. The deviation between low & high is too great to gift a mid spot to. It would be not to dissimilar to having Daniel Rich in your side. In fact I might write an article on Rich so I can spray the crap out of him!

Thanks lads. The dogs are a curious beast next, a lot of their mids rotated fwd or back. Even Tom Boyd is a chance at fwd back if not ruck. The SC gods hold the key.

I've done some research on Tom Boyd Gaveday & written a piece on him. It will be up soon

Tom Boyd should be the first ever tripleDPP. Back fwd ruck. I'm hoping he'll get fwd / ruck.

And I look forward to the read!

Hand on my heart I would have never considered the bloke. Really enjoyed the read, Gaveday.

500k outlay for potential is a tough sell, especially in the mids. No questioning his talents but as already mentioned those around him are a bit ahead when it comes to getting reliable midfield minutes.

Will keep an eye on him throughout the year

He first got my attention in his 2nd year. Compared him to Doug Hawkins. Just love the way he goes about it.

Jack one of the pups who hopefully will get let of the leash and gain DPP next year.
If this happens will definitely consider.
If he can get that extra goal and clean up his disposal a bit be a fantastic and much needed addition to our forward lines.
Great other option. Nice one gave.

Nice work Gav.
Not really the form line that screams pick me.
This year saw a drop in tackles, CPs and clearances.
Sounds like a shift away from inside work.
Fraid not. (unless DPP)

The carrot for me is he says (via club website) that he's targeting getting more CP. So he and the club are aware he's dropped off.

Supreme stuff again Gaveo. I don't reckon I'll be removing him from the watch list, at around 508K you could look at him as almost a mini fallen premium. I reckon he's a great chance of rebounding and of cracking the 100 SC average in 2017. Almost in the mix as a magnificent pod for me at his pricepoint. Enjoying your article very much mate – as are all of us! Thanks again.

Ah mate the pleasure is mine Jock. He's got POD written all over him, for better or worse!

Macrae knows how to find the ball. I see him as a dt option not a sc option

Great right up and agreed a pretty solid no from me if mid only. Crameri could also be challenging for that spot as a further question mark?

Great write up mate. Very balanced. Got me thinking…

As DPP option Macrae will be top 3 fwd. Now falls into a must have category. Will be starting him at F2 in Bombers Rules this season.

Agree. My F1 at the moment.