The Book.
Exciting, looking forward to the next chapter, can’t wait to see what happens next, couldn’t put it down, riveted till the last page, shame it finished. Best seller. Well that’s what the missus tells me. Being a bloke not much of a reader unless it is the sport pages of the herald sun.
This was the Port Adelaide of 2014.

The Movie.
Hyped up, looking forward to see the improvements and how this translated to the big picture but early on clear it didn’t live up to the hype, was over rated and most walked out on it before it finished. A lot of fizz but no substance. Port Adelaide 2016.

Once he got his body right in 2014 Gray announced himself as one of the premium players in the competition in a big way. Playing almost every game in 2014 and 2015 only missing when Bryce Gibbs laid a “crunching tackle” Daryl Eastlake would have been happy with! He continually punched out some monster scores at an average over 110. Robbie “50 Shades” Gray had finally arrived.

’50 Shades of Robbie Gray’ – ladies can now read how the @PAFC champion went from tearing knees to tearing sheets. @robbiegray17

Cast your mind back to 2015 when he had the magical DPP status and was the number one selected forward in the comp. You have a midfielder who racks up possessions at will, who likes to push forward and kick a goal. A Supercoach dream.

It was like Christmas had come early. What does Santa have in store for us in 2017? Supercoaches would rejoice in the streets if Santa reaches into his big red sack and gives back his DPP status. *note from Jock, Santa was a miserable bastard and he has now been confirmed MID only. 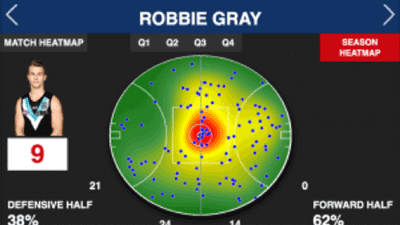 A look at the heat map above should have us all salivating. Looks promising but just be aware that the heat maps are only one component in a player gaining Dual Position status. However, AFL Fantasy added FWD eligibility to Robbie Gray during the season in 2016. That’s a good sign.

Unfortunately Robbie lost his DPP status in 2016 becoming a MID only. People jumped off him in droves but I figured class is class and he was as good a MID as anyone else around at his starting price and a nice pod. Robbie richly rewarded those who started him and burst out of the blocks with 3 scores above 120 in the first 3 weeks. Bear in mind this was with Lobbe tapping the ball down to him who (let’s face it) may struggle to get a game in the Quambatook twos.

With Ryder back in 2017 could 50 shades push himself into Super premo territory?

How’s that for finishing on a high!

In 2016 he succumbed to the modern day midfielders curse and twanged a hammy. He spent a couple of weeks on the sidelines. But other than that and the bone cruncher from Gibbs he’s been very reliable and durable over the last 3 years.

Prior to 2014 he suffered a number of injuries that prevented him from getting on the park and showing his true potential. These days seem to be well behind him as he has played 21, 22, 19 games respectively from 2014.

There is always some inherent risk but I can’t see any apparent risk. The only other foreseeable risk is at, times last year, 50 shades got frustrated with how Port were performing (who didn’t right?) and walked the Tribunal tightrope.

So there is always the risk he could miss a couple for an indiscretion.

You get what you pay for. He’s not cheap but ultra-consistent and can go huge.

Rolled gold especially if DPP (now confirmed MID only). Set and forget a keeper all season.

With the forward cupboard looking like being raided with the possibility of the stalwarts in Dusty and Dahlhaus and new kid on the block Zerrett losing their DPP – it would be nice to restock the shelves. Let’s hope Mr 50 Shades – Robbie Gray slots in.

If DPP its a no brainer and a resounding yes from me. Even without DPP he’s a big chance to line up in my team in the centre square come round 1. Love that POD action.

Some players are just great to watch. Having them in your team is just the icing on the cake.

A great bloke to chat fantasy footy with. Kick Robbie Gray around with him in the comments below.

Great work Trigger! Close to a lock if he does get DPP, otherwise should be considered as a solid POD

As I said even if he doesn't get DPP will be very close – consistent avg 110. POD.

Yep should get a Guernsey.

Great read, Trigger. Hot on the heels of the Dusty article yesterday who would you take as a mid pod? (Assuming neither get dpp status)

Thanks Kev enjoyed writing this one.

If he actually got to rove the ball first instead of reading it off another ruckman this could improve his scoring yet again.

Thank you Trigger – Robbie is always a player I analyse closely for selection purposes.
I have a few concerns;
1. Most likely MID only
2. Round 9 Bye
3. Plays SYD, ADE, GWS in first 4 games
I voted "a likely starter". If I don't start with him then he could well be my first MID upgrade.
Kind regards,
Peter J Higginbotham

you certainly do do a deep dive, didn't think about the bye to be honest.,

Mid only? for me he will be my POD. I see him going 110 plus next year so will be around the mark with hannas, jpk , cripps, bont etc
I will probably take one of these guys but lots of options.

Round 9 bye – hmmm. I guess you start with a dozen or so premos that you hope play all 22 and are in for the long haul. This would mean that everyone of them has a week off during the bye,

Gray is the only premo I would take out of the PA or GC. I guess by the time Rd 9 rolls around a couple of rooks are fat cows ripe for the slaughter. so one up, one down would give a premo who could cover for gray during his bye,. when they have their bye rd 12ish gray would cover for the premo you brought in?

I like to start with him as 50 shades is quick out of the blocks.

not sure what his record is like against the syd. ade. and gws but he generally goes alright against most teams.
a bit more a deep dive he had a poor score against Sydney but 137 and 106 against crow and giants.

Rd9 bye not an issue for me Higgo. Rd 9 we only lose max a few premos. He will be available throughout the major byes which i think is more important

I could be wrong but the round 9 bye being mentioned means he is a perfect upgrade option after his bye so you can avoid having a missed game, taking a premium from a later bye there is no choice but analyzing a player with the first bye and selecting him eliminates one of your upgrade options after that first week?

If he has DPP every man and his dog will have him. If not will be a great POD to start with. Myself started with him last year. Was out for a few weeks so traded him and brought him back later in the year. This man is a match winner and knows how to kick a goal which is a great source of points for midfielders.

In consideration regardless of DPP. An early upgrade post that first bye will have 50 shades right at the top of the shopping list if I don't start with him. Nice work Trigger

Thanks Mate, was good to get the first article for Jock away

hope you enjoyed it

Certainly did Trigger. In fact I've enjoyed them all

Bar has been set pretty high.
Some cracking reworks so far..

If DPP he will be the number 1 forward. If MID only I don't think he will be top8, not far out though

Thanks Nick appreciate it.

I think that is why I enjoy reading Patch's articles as we have a similar style where you try to make it a bit of fun, light hearted but also provided enough information so that the community is informed and can make their own call.

Did enjoy writing this one, once the 50 shades ideas popped up then it just seemed to flow from there,.

Thinking I may do my next one on Buddy,

That is by far the best analysis I have ever seen on Port Adelaide.

how you tied their performance into the Book and the movie – wow masterstroke.

Like the rest – locked in if DPP will consider if he is mid only. you made some very compelling arguments, a great read and well thought out.,

Glad you enjoyed it 🙂

Loved it trig. DPP and he's the lock of the year. Well one of. Love the heat map reference, really backs up your article nicely.

If 50 shades is a mid only and other current dpp's become mid only doesn't leave much in the Fwd line.

A big shout out of applause to everyone who has posted a player for thought thus far, I really appreciate it and I'm sure a lot of others also – please show your appreciation for the SC Experts, peace n love ,cheers

great article. I hope he doesn't get DPP. Rather have him as a POD in mid than a fwd that everyone has

Love it Daizy. The old cookie cutter syndrome. How did you make those little ZZZ symbols?? I cant see different sized z's on my keyboard

Hard for me to start Gray as a mid, he is quite a bit older than some of the similar priced young trouser stretches around that price point, who you'd reckon will have more improving to do… eg Bont Cripps Zerrett Treloar.