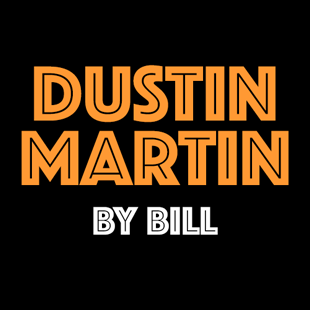 Chopsticks, or knives and forks?

It takes a brave man to take on Chopsticks.

Whenever the waitress strolls around to your table at your local Chinese joint, there’s always one character who takes on the responsibility of the Oriental utensil.

More often than not, he’ll make a dick of himself, fumbling his sweet and sour pork around and staining his finest Bintang singlet.

But when he succeeds, he rises above the pack and draws envious glances from all around the eatery.

Some timeless wisdom from The Crouching One: For several years Dustin Martin has been available as a FWD and proven to be one of the best scorers in the position. The only discussion regarding Dusty within the community has been whether to start him straight off the bat or bring him in as an early upgrade target.

This year though we could see that all change, as he’s likely to lose his DPP eligibility after a sensational year as a permanent midfielder. (* note from Jock, confirmed now as MID only). On the flip side, it means his ownership will be down for the first time in a long time.

In 2016, Martin started in 38.5% of sides and finished in 55.7%. His ownership should start at less than half of last year, which means for the first time in his career, Marin could be a POD.

Martin’s ownership was lower than usual at the start of 2016 as SuperCoaches were concerned that ‘Chopstick-gate’ and his old man being deported may affect his early season form. They were proven right to an extent, as he only surpassed 100 once in his first 5 matches. Many coaches, myself included, jumped on at Rounds 6 and 7 when Martin was available for less than $510k.

The rest of his season was sensational. He dropped below 100 just three time from Rounds 6 – 20, including mammoth scores of 167 & 152. His form dipped again in the last few rounds as the season slipped away from a putrid Richmond outfit. He finished 10th overall of all mids in 2016 and 12th of all players.

Martin’s durability and consistency mean he is a safe option. It’s hard to see his form dropping in 2016.

The issue with his selection is that now as a midfielder it becomes much harder to squeeze him into our sides. He’ll be in a similar price bracket to the likes of The Bont, Cripps, Treloar, Sloane, a discounted Fyfe, the list goes on. We can only fit a handful of these guns into our starting side and Dusty could be the odd man out.

Consider these other blokes as the safe, popular options. Conservative men who prefer the tried and tested knife and fork with their peking duck will select these guys. But they won’t stand out from the crowd.

As a premo mid, you’d only pick this bloke if you planned on having him in until Round 23. There’s no injury risk to speak of, the only question is whether his scores get him into the top 10 mids come season’s end.

Will cause plenty of headaches prior to the 2017 season. Will take some serious testicular fortitude to overlook other players in the price bracket, but it could be the shark move which sets your side apart.

So community, will you take on chopsticks, or play it safe with the steak knives?

Great stuff! Thanks very much Bill. There's no doubt he'll be a point of difference MID selection next season without the FWD eligibility. That opening price is a worry. Pits him around that Patty Cripps, Bontampelli, Tommy Mitchell tier of options which will be hard to fit in depending on your team structure. On the upside – I don't buy into the talk that he'll spend more time FWD this season given Caddy & Prestia are tucking into the lineup. He's just too valuable in the engine room now. Bloody oath he'll have stints up FWD, I just don't think he'll be splitting his time between mid & fwd as much as some reckon.

Thanks mate!
Dont reckon the tiges bat deep enough in the guts for it to affect dusty.
Something i only thought of after id finished: Dusty's contract is up after this year. Plenty of incentive for him to go large and set himself up for a long term deal worth $1M per year

I enjoyed the chopsticks analogy all the way through. Well thought out.

If he is mid only will definitely be a pod as people will jump off him in droves like they did when Gray lost his DPP last year.

wait and see for me.
I never start dusty as for some reason blues r his bogey team and he always posts a modest SC score. So normally pick him up cheaper Rd 5-6.

If pure mid be hard to slot him even if he does drop in price with the quality in and around that price.

I'm torn. I'm a tiger and I love Dusty. A Dusty fend-off followed by a dribble kick forward is an almost iconic part of our game. Interestingly, his average was only 3 less than the 8th best mid (Selwood)

I agree with you, Bill. Will consider

Can't see myself starting with him. Reckon he'll be in less than 5% of teams to start with. So he will be a POD. If he presents some decent value at some point of the sorry I'll look at him. I love love a durable player. Great work Bill

Dusty had good enough numbers towards the mid and later part of the season this year to be a great M5-6. Many, myself included overlooked Robbie Gray as a starter this year due to him loosing his FWD "aledgedability". Although Robbie didn't produce consistent scores this year he should have and was a great POD to gamble on. Dusty is a player with a steady upward trend over many seasons now and should not be overlooked because of his MID status

Great stuff Bill! Too many midfielders around that price range for me to consider. A handy POD though as a pure MID