There I was at AFL House this morning.

AFL Fixture reveal morning is generally pretty enjoyable. A good opportunity to catch up with some old mates. Nice spread. Bacon, eggs, pancakes. The works. Everyone’s relaxed after a bit of a post season spell.

This morning was different. Gill wasn’t giving me much over brekky. Not like him. I shrugged it off. Probably just a bit sheepish after the 5 minute tirade he copped from me over the phone about St Kilda not being a part of Good Friday.

And as the 2017 fixture dropped things all looked pretty good. Generally fair across the board with a few dodgy calls here and there. Not too bad. The Saints have a bit of action on Friday night. Plenty of games at Etihad. The chicks Grand Final on the Saturday arvo of Rond 1. The Grand Final back in the last Saturday in September. All good.

..similar bye structure to 2016. Righto. We’ve dealt with the split rounds over the last handful of fantasy seasons. We’ll be right..

Then I chucked the specs on and had a closer look at the byes..

Stood up. Glared at Gill. Chucked half a plate of scrambled eggs at the wall and stormed out of the joint.

This is the bye structure we need to grapple with as fantasy footballers in 2017 folks: 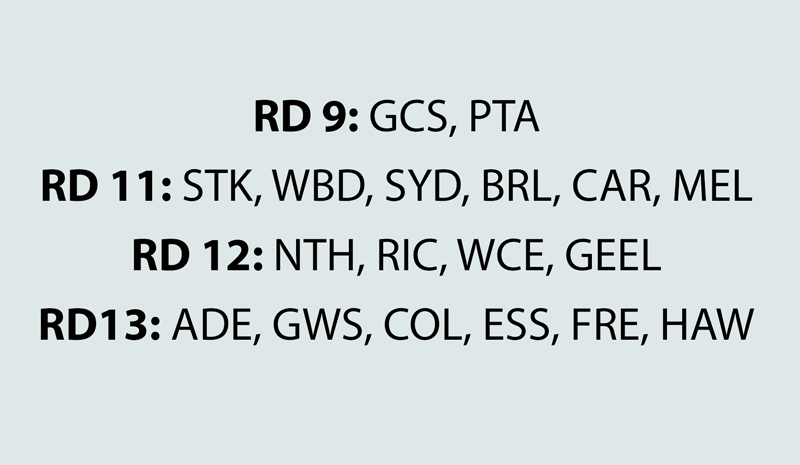 Once again the AFL, in its fat cat from city hall quest to become a global corporate monolith, has shown a blatant disrespect for the fantasy community. It’s probably unwise for me to pen this article in my current state of fury.

However my friends. A great man once said “..rise above this bullshit. Get on with the challenge. Roll with the punches, and the promised land of fantasy enlightenment will be yours. And once more, you’ll be a man, my son”.

@jock_reynolds @al_superfooty surely its too hard to plan around this right? general balance around byes + post bye + pray to higgo’s mother

So what does it all mean?

We need to discuss this as a community. Gill’s not answering my calls. The team at Supercoach & AFL Fantasy are scrambling trying to unpack what this means to us in season 2017.

Are the bye round rules adjusted to allow us more flexibility around the byes? Do things remain largely unchanged? Has a new layer of strategic opportunity revealed itself to us like the risen Phoenix? Does GAJ become public trade in target #1 after his round 9 bye?

Let’s work through this in the comments:

RIP Supercoach, forever in our hearts, torn away from us by AFL hierachy. Gone but never forgotten.

Mate. I'm furious as well. But you know.. we'll need to pick ourselves up and turn this situation into a positive. More scenarios. More strategy. Higgo's on a considerable mongrel thinking about the mathematics possibilities.

yeah that's true! it's always darkest before dawn! We'll get through this together, and rejoice together when we find a path through the chaotic disarray. Will look forward to hearing Higgo's thoughts…hopefully he doesn't swear for his mother's sake!

RIght now he's blowing into a paper bag mate – with excitement more that anything else.

Draw – plus. Great to see the doggies getting some prime time spots after their great season. Exciting to watch. Bont for VC anyone?

Draw – shite. 4 byes! That is a completely new level of complexity. Can't plan for that. So we have a bye Rd 9, Rd 10 everyone plays, Rd 11-13 byes again? Kosi has a lot to answer for. All good with growing the game. China a step too far and it has given SC a good rodgering.

Looking forward to your plan for this one Jock. We need one!

Expect to see very little players from Port Adelaide and Gold Coast in teams before round 9. They'll be great upgrade targets

Interesting. Will we have 3 trades across all 4 bye rounds. Will it be best 18 across them. A hell of a lot more strategy involved. Those that don't plan accordingly will have an early mad Monday!

Bloody hell Jock! I could feel your utter disdain reading this absolutely mind boggling decision. After stumbling blindly through the byes last year I said to myself, "Kev, quit with the bullshit. How will you ever stand up in fantasy land with your shithouse bye planning?". Low and behold Gill pulls this out!

Not happy. Bit early to hit the scotch. Will be back after a warm milk

The great man that once said "rise above this bullshit" was Max Cavalera, in the song 'Terrorist' by Soulfly.

Does this mean we'll put a premium on getting Port/GCS rookies?

They'll be out when we'll have 16 other teams playing and will be available in every game when the other sides have their byes.

8 players, 6 first rounders, surely 3-4 of them get games from the start? We could potentially fill out our benches very nicely with these two teams and smash this bye round stuff out of the park.

should we be holding on to risky rookies for this long.

Depends if he gets a gig but Riley Bonner could be a nice cow around his bye or if he plays later a nice trade in target after.

Fan of his, not sure he gets a gig if Power are fully fit though. Reckon he'll be a downgrade target at the moment (big preseason can change that of course)

I propose during bye rounds the players not playing should be temporarily set aside, freeing up their salary and positions on the field. Then we can trade in players in each of the available slots under the salary cap. I think that would be pretty exciting way to go about it, it would be fun to have players pinch-hit for a round.

As opposed to the bye rounds being dire, difficult to plan for, with league victories determined by availability not ability. AFL teams don't play with 16-19 players, they play with 22 – it simply does not represent AFL.

Their approach to Bye Rounds need an overhaul, especially now the byes are a sh!tstorm.

Get old Cath in the room with Higgo while the mongrol
Is at full mast. He might try a move on……
Regarding the bye's – we will rise above them and stand on the backs of those that planeth not.

Put an H on the end now… think there's about 3 'Harry's' on this forum!

The AFL has lost touch with reality. Surely it understand Supercoach is MUCH more important than the actual footy. It needs some input from serious fantasy analysts on the draw for 2018, including scrapping all split byes.

I think this is an appropriate time to push for Jock Reynolds to join the AFL Commission in an advisory role. Someone who is in touch with the common folk like us in the fantasy community.

Thank you Harry. The push for a seat on The Commish gathers steam day by day. Best way to get around the multiple Harry issue is to sign yourself into the comments using the 'Intense Debate' thing up the top mate. That way you get a notifcation when someone replied etc and you can whack a unique picture on yourself as well

What shall we do next Jock…. protest outside AFL House? Start a 'Jock for Commission' Facebook page? Write a brief detailing all the wisdom you can bring to the table????? Too many lawyers and academics on the commission, not enough pragmatic thinkers!

In the words of crouching one "This look like shit Mr Jock, You want fight me Gillon?

Every cloud has a silver lining. This will sort the wheat from the chaff. The sh*t from the clay. Any other sayings I've left out?….. If you can plan and execute a reasonable bye strategy in 2017 there is potential to jump a LONG way up the ranks. A lot of people will just say its too hard to plan- and take the mediocre scores that come their way. Most of the community here plan for better than mediocre.

YES Capt. This is the talk we need!! Mate – I was bloody furious yesterday. Today – and your comments here have helped even I – The Father of Fantasy – too see the thing in a new light. Bring it on

Keep calm and carry-on. It's not like anybody was planning on having 6 suns or port players in their starting 30

Good luck struggling your way through this bye crap if supercoach and fantasy keep the same format.Many players will pull out next year,while COACHKINGS will thrive.

Richard! Great to see you in here old mate. Wait till you see what's happening with CoachKings next season mate. Can't reveal much at this stage.. let me just say the words… next level. Brace yourself son!

Enough with the Thursday night games. I don't want to have the AFL do what the NRL when next week's teams drop the day after the previous round finishes.
Then you have extended interchanges and teams that don't finalise until several games into the round.
I'd rather Friday night to Sunday evening.
C'mon Jock, we know you can bend the administrators ears.

Gday there Westy. God knows I give it a crack. Can't count the number of times I've stormed into Andrew, and now Gill's office to give them a solid bake. I agree with you on the Thursdays mate. Keep the peoples game to the weekend when the people can get their arses onto a seat without stuffing their whole weekly routine I reckon

i imagine they will do the same again this season

How many scoring players do we get in round 9 please if anybody knows?

Thank you so much sharing that details. I want to encourage that you continue your great posts.
Best Battery Powered Leaf Blower