The 2016 NRL SuperCoach season will be one I’ll never forget.

There were times my excitement levels superseded those of Mitchell Pearce watching 101 Dalmatians in 3D, while other moments resembled how John Hopoate would’ve felt when he realised he needed to wear gloves for his next boxing match.

Most of all, I’ll remember the 2016 season being the one I began to share my thoughts and opinions with the Jock Reynolds community and wondering how other coaches would respond to my humble advice.

I have to admit, I was fairly happy with how my season panned out despite finishing with my worst overall rank to date.

Let me show you the highs and lows of my season and what I need to do better for next year.

As mentioned earlier, I finished with my worst overall rank for any season. I probably didn’t deserve to finish any higher due to my poor salary growth management and reckless trading throughout the bye period. It’s very eye-opening to see how I tried to get that upper hand on my opposition, but in the words of the great Johnny Farnham – “It seemed like a good idea at the time.” 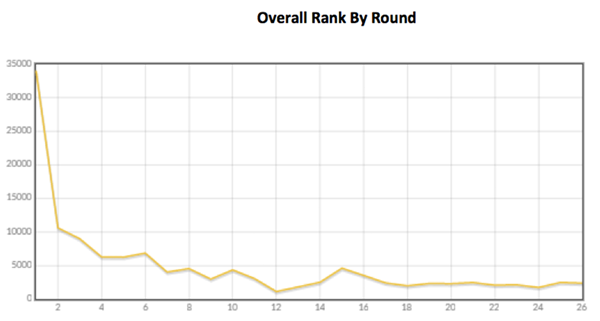 This is typically how my overall rank travels each season. Due to my preferred tactic of loading my NPRs (Non-Playing Reserves) and Centre/Wings with cheapies, I begin with a poor starting rank before I try to get into the top 1000 before the bye period begins. It seemed like I started the season with ten keepers although Woods and Dugan struggled to meet that status. My Round 26 team suffered slightly with my last trade being used in Round 21. This meant that I was stuck with the injured Tedesco as a NPR and one of Friend, Whitehead or Ma’u coming into my seventeen.

I didn’t play Barba in Round 26 either due to the Sharks playing the Storm. It’s the struggle of using this tactic each season and being a pure overall player. I don’t have the need to save trades for a head-to-head final and I prefer to use my trades to achieve a strong team as soon as the bye period is over.

It’s a fairly standard move to select at least two CTW cheapies in your starting seventeen but despite all three of my choices looking like potential gold mines, they became huge failures.

Ben Henry lasted 30 minutes into the first game of the season before suffering a season long injury. Dale Copley produced underwhelming scores in the opening two rounds of the season before giving me a -1 in round three and an injury that would see him miss the following ten weeks. Nathan Green was a very debatable choice at the start of the season, although I stuck with my gut and decided that an 80 minute edge forward that costs around $150k would surely make me some coin. Big mistake! He lasted fifteen minutes into his round 2 game against the Tigers and then we didn’t see him again until round 16. The frustrations definitely began early in my 2016 season. I can already hear a lot of you experienced SuperCoaches laughing at a few of my trades, completely understandable. This is the first time the community will see my trade strategy and I’m prepared for the onslaught of interrogation.

I generally like to use all trades available as soon as the season kicks off. As The Crouching One would say, it’s the “BANG BANG” tactic of keeping all your slots productive, the cash generation flowing and making sure you’re set up nicely for the bye period. There were a number of trades that I now regret but they all served a purpose. Let me show you my wins and fails throughout the season:

The main thing I liked about my 2016 team was the starting guns. I managed to get a nice forward pack of seven potential guns together while also having Cameron Smith, Johnathan Thurston and Jarrod Croker. If only Josh Dugan didn’t have his worst season in a long time I would’ve been travelling much better coming into the bye period.

This would have to be my worst trade of the season. I brought him in for two reasons: 1) Bye coverage/POD player and 2) With Rapana and Leilua performing very well, I though Whitehead could jag a number of attacking stats while playing out on the right edge among the two guns. The rare occasions he finally broke over for tries, he still didn’t produce a monster score due to his average base stats. Worst of all, I paid massive overs for him at $420k. Silly, silly move.

I think a lot of us were in the same boat coming into Round 12. Milford was producing some great scores and it was difficult holding off for the perfect moment to bring him in. If you didn’t start the season with Milford then Round 12 seemed to be the last chance to pick him up. Unfortunately for us, he produced one score over 50 throughout the whole bye period and never gained enough money to give him the flick for the run home.

Trading in Euan Aitken in Round 11 (POD/Bye Coverage) WIN

Aitken was the perfect trade-in for round 11 with his low break even and great bye coverage. He became a trade option due to scoring zero points against the Titans in round 7 which saw his price drop about $50k. Aitken rewarded those of us who took the gamble with some great base stats, decent scores and even cracked the century against the Knights in round 16. It’s unfortunate that his base stats dropped in the closing rounds of the season.

Nathan Cleary started out as a great cash cow and for some of us he became a nice addition to the run home team. I decided to hold on to him due to the Panthers run home and it paid off nicely. He was one of those players that you had to pick the appropriate times to play him in your seventeen while having a back-up to swap with. I had Thurston as my main halfback while Cleary chipped in when needed.

These would have to be my worst trade-outs of the season. Both Vunivalu and Barba gained plenty more value and produced some great scores long after I got them out of my team. I remember needing that little bit extra coin to do the Aitken/Whitehead trades in round 11 and Vunivalu was my only option after he made me about $110k. To make matters worse, I got Barba back into my side in round 20 after giving him the flick in round 7. Patience and discipline were lacking with these trades.

Goodbye SuperCoach 2016…and thank you!

A huge wave of satisfaction and happiness came over me when I looked back at the season that was SC 2016. It wasn’t due to my rank, my trades or my decisions; it was largely due to what I’ve learned and will take into next season. I plan on using the same “Bang Bang” tactic in 2017 although I need to spend more time looking into alternative moves, rather than settling on a trade because it’s the first one that looks attractive.

Finally, I want to thank Jock, Peter, Crouching One and all of the Jock Reynolds community for giving me the opportunity to share my opinions and talk SuperCoach. I’m really looking forward to 2017 and I’m already asking myself whether I’ll be starting the season with Jarryd Hayne priced around $240k and/or Bevan French. I can’t wait to discuss the 2017 season with you all in the near future.

Thanks Rob! I missed out on Ryan James mate, it was painful to sit back to watch haha.
Well done on your season!

nice work cowboy. Great write up and reflections on the season past. You've got to get a lot of luck and have the rub of the green with your decisions so your logic and strategy was sound and could have borne more fruit any other year. I finished 393 but limped in without any trades so had I saved one or two I might have been slightly better off but I wouldn't have it any other way. I actually made up a lot of ground over the byes. I had a bye friendly team from the start and used a few trades over the byes so happy with how it panned out. Still my best finish ever anyway. Thanks again for your work over the year on the poddy and site. So glad jock branched out and covered nrl this year. What I wouldn't give to hear jock, crouching and higgo discuss NFL on a pod….

Cheers Marvin and great overall rank! Sounds like you had a ripper of a season.
Hey that's great to hear you're enjoying the pod and website, we love hearing it. Feel free to offer some suggestions on what NRL topics/areas you want to hear about.
Haha those boys would be epic discussing NFL and NFL Fantasy. I reckon Crouching One would be smashing the rum cans throughout the season.
Thanks mate!

As long as we remember those mistakes for next season so we don't make them again haha. Looking forward to chatting footy with you next season Marvin

Love your work Cowboy. Thanks mate. followed all of your articles and will continue to do so. Cheers

Legend, thanks heaps Jim. How did your SC season go mate?

Wow trading Semi 3 times throughout the season!! He's one of those players that's hard to watch when he's not in your side isn't he. Those Raiders' centre/wings had an outstanding season and it must have been nice owning all three. Mate, finishing with a 10k rank in your first season is sensational. Well done on your season killer. Haha I can't wait to have a discussion on the "whether to start with Hayne" debate. I'm assuming he'll be scoring much better after having a pre season under his belt. If he's going to be around $240k then happy days!
Thanks Killer and thanks for all your contributions throughout the season.

Cowboy, could you do a holden cup preview of young players who may play NRL next year ,& if there are any that you have an eye on for 2017 .in the next pod cast please .if not still appreciate that you replied to my comments mate …I think Tyrell Fuimaona from the Eels has a big future in NRL ..

Definitely mate it's good to have a look at those rookies/cheapies we could sneak into our side at the start of the season.
Fuimaono had a cracker of a season in 2015 and it'll be good if he gets a run in first grade. Reminds me a little of a young Manu Ma'u

@CarltonFC coach David Teague: "Docherty came off with a hit to the shoulder. He came back on & played out the game. I haven't heard anything there."

Keep up with the Round 5 injuries in our rolling report from the coaches 👇👇 https://bit.ly/R5RollingReport

Sub is Cousins or Brockman then #supercoach

Everyone rightly taking Tex in #supercoach but Bailey Dale waa 298k and has gone:

Taking kick outs and enjoying life as a defender.