The Round 21 AFL Cheatsheet

This week’s Cheat Sheet has no real surprises in it. We’ve got 6 decent rookies to look at, 3 of which have a real shot at scoring well on the bench.

I’m also suggesting we take a look at Pendlebury, he’s in the trade basket for me (I don’t have him) but if he’s named and plays then obviously you should hold.

I’m done with Deledio, he’s a CoachKings only option for me in future. Prior to this year he was a player with bad luck when it came to injury, this year he’s officially become an injury prone player.

I still have Hall on the bench, I hope he gets named and I can loophole him but fully expect him to miss again which makes me very sad. He was my preseason pick of the litter and played really well…for about five minutes. I’m annoyed that Clay Smith went down with injury but I am seriously considering using my final trade to switch him to Dahlhaus, I’ll have to sleep on that one.

Let’s talk in the comments Community, let me know your plans and maybe your biggest mistakes for the year too. 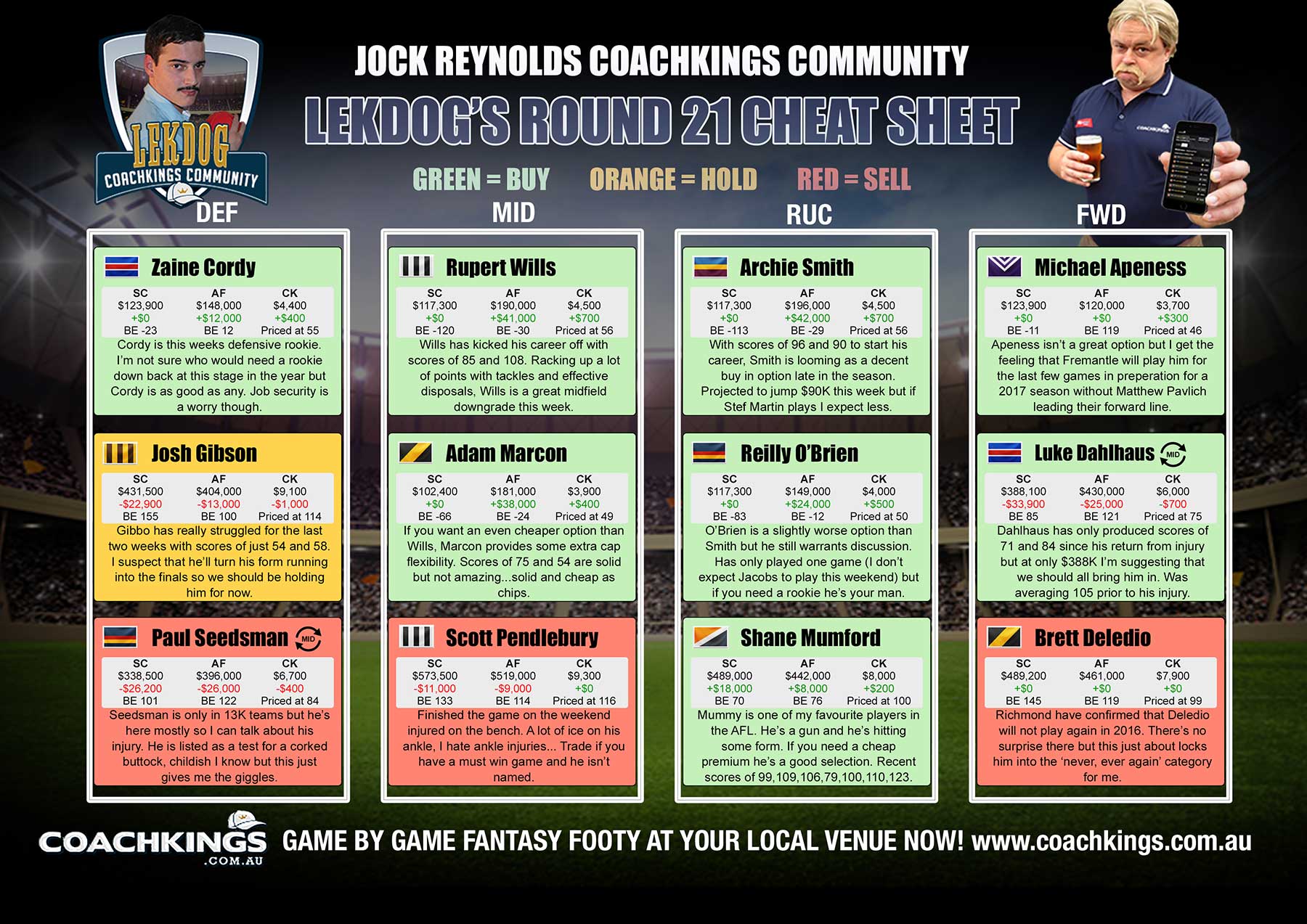 HAVE YOU QUALIFIED? ONE WIN & YOU’RE IN Wines to Cripps? 2 trades left and have a must win game this week.

Cripps should ton up in his last three games, good move

Do it. Last week I went Wines to Sloane and certain people told me it was a bad trade. Sloane outscored Wines by 40-odd and won me an important final. Wines can't be relied upon to ton up.

I have 2 trades left & $51k. Semis this week so make or break. This Pendles news is spinning me out. So…

forget the cover & go for it , no risk no reward

Great list
Dahlhaus is a big risk for a final. At that price you may be able to loophole off the bench though

That's my thought too mate

He Man
Guest
Reply to  LEKD0G

You reckon no good for finals?

LEKD0G
Author
Reply to  He Man

He's slightly risky but I like loopholing him if you can

Should I trade cox to dahlhaus or trade Pendlebury? Was thinking of trading Dahl in and covering pendlebury with mathieson

4 trades left, have Lycett onfield up forward, tossing up whether to ditch him for Dahl or flip him to ruck bench as cover. 430K seems alot to be sitting in R3 when he looks likly to score similar or even less to Archie smith and I should have a trade to cover rucks anyway.

Should I give buddy the flick to a wells type?

Motlop or winguard for f7?

Motlop has at least one big score to come, was hoping it was last round : (

Anyone who has trades left at this stage is either in a coma since round 9, very lucky, lowly ranked and or hasn't logged into SC for a month or more.
As per usual I followed Crouching's strategy and sacked everybody who had a cramp so I haven't had any trades left since just after the byes but, if Hall is fit, Hannerbery spuds it up, Ward continues last 3 form and Priddis gets nuthin from an agressive GWS midfield, along with Rance getting an opponent and Buddy and Joey having a dual concussion headclash in the first quarter I'll be in with a chance but only if ZMerrett, Zwilliams,JJ and Gibbo outscore Heater, Wells, Mundy and Laird. And I'll need Pendles or Kerridge to score Pendles ave.

4 trades left with overall ranking of 1231. Have to be smart with the strategy (i.e ensure you pick rookies with good job security to cover injuries in early/middle of the year to save trades, and be wise with trades during byes. I loaded up on players who had the round 15 bye at the start of the year which meant i only used 4 trades over bye weeks.)

I'm ranked 110 with 4 trades left. I have Pendels but have Shiel as M9 so hope he comes back in. Only trade this week, maybe Petraca to Dahlhaus that will leave me 3 trades left with $140k in the kitty for last 2 rds. I have the bye this week in 9 out of my 10 leagues.

I'm in a similar boat. Ranked 525 with 3 trades left. Forced to trade Libba last week for Dahlhaus to cover Shiel. If Pendles is out, Shiel will cover for him if named. If both Pendles and Shiel are out I could trade Pendles to the Bont (have Sloane) but not having to win this week means I would probably switch a DPP from my forward line and play Silvagni on field and wait to see what happens next week. Can also use Dahlhaus as an emergency and loophole with Shiel this week if Pendles is named. Petracca to Dahl is a good trade IMO.

What do you guys think of Lynch from Adelaide?

LEKD0G
Author
Reply to  He Man

Doesn't excite me, too inconsistent

Who can i get for 360k fwd for bloody Waite

WTF?
If u r still holding Waite (not sure why u would have him in the first place?) maybe consider moving to a country that doesn't have AFL or SC as you know bugger all about either.

Well matt, waite was killing it early and wasnt too fazed by few lower scores full premo was key, still b smokin you, thanks for ur help loser

Well that's a contradiction right there.
Full premo with Waite?
c'mon you are having a lend surely?
Waite has never and is never considered a premo as he is a 30 something injury prone dinosaur.
If you wanted to go full premo you should have traded him after Rd 6 when his scores started to head south as he actually started to play against some decent opposition.
Or at the very least before his bye when he got injured again.

Over the course of the season Kerridge has scored over 200 points more than Waite and I don't think anyone considers him premo.

Just get whoever you like best, they're all very risky at that price.

Maybe look at some of the mid-priced doggies? With the injury carnage there, any of their players with 2 working arms and legs could find themselves part of the midfield rotation soon.

if you can swing a mid to fwd, Billy Stretch (Melb) going ok

When Mitch Robinson clicks he has a nice ceiling. Steve is right though, at that price everyone is a risky pick

Any thoughts on Yeo to Houli? Will leave me with 1 trade and lose the loop hole with Bartel between mids and defenders……. but its all of nothing now, Thanks

Thanks Coaches. Much appreciated.

As someone who's season has been materially and negatively impacted by Elliot Yeo I would say trade while you still can. He dropped 37k last week and with a b/e of 145 this week he will have the same value as rookies like Tipa, Ruggles and Collins next week. As you have Bartel in midfield, you could do a straight swap to Dalhaus if you don't already have him. I also think Zach Tuohy given Carlton's draw and his recent form is a very viable trade. If Yeo can't pass 50 against Freo and Collingwood, he won't be doing anything against GWS and Adelaide away. What a f***ing prick.

Nope, Houli isn't worth it. Don't get sucked in haha hold the dpp swing

Thanks Coaches. Decided to hang on to YEO and save the trade.

Sloane better but Rocky loves his opponents, I'd be bold and go Rocky

Im thinking I will go with Rocky or Sydney J Kennedy as my oponent has Sloane, however all look tasty

I would like to thank you Menadue, You have been there when I needed you this season, pumpng out a big tonne during Byes, fitting back in for loopholing when needed and slow burning increase in value over the season. Although you have been of great service and many times I wanted to push the Trade button, i am now finally trading you this week to Dalhouse with a sad but excited heart. I wish you luck for next season.

LEKD0G
Author
Reply to  The Master

Haha I held Menadue a long time as well, just never got to trade him

PENDLES is still named. Do you think he will be a late OUT?

Would you trade treloar for Sloane? I have plenty of trades left

Yeo or Stringer or Petracca starting ?

I'm trading Libba for Dal and then wait and see how my league final goes. I'm leaning towards Yeo but maybe Stringer v pies def