So who’s tempted by the two POD options that have become available from the Raiders?

Whose team got affected by the injuries last weekend? Round 9 presents some interesting opportunities for coaches with a number of players set to gain a lot of coin.

Most of the trade movement this week will revolve around the Centre/Wing position. Rabbitohs centre and popular SuperCoach selection Hymel Hunt will miss the remainder of the season, Suliasi Vunivalu will play his third game and start shooting up in value, while BJ Leilua scored a huge 132 points last weekend and will be up against some averaging performing opponents in the coming weeks.

These are only the beginning of the tempting opportunities that have unveiled before us.

Many experienced SuperCoaches will tell you that you shouldn’t chase last week’s points. Leilua scored 132 points last weekend in the Raiders demolition of the Tigers. He’s definitely one of many centre/wing options to be considered this week and it’s not just due to his epic performance last week. The Raiders have a very attractive draw over the coming weeks while also playing two of the three big bye rounds. He’s producing an impressive 64 PPG average and is projected to cost around 430k once the bye period commences. With the Raiders playing the Panthers, Dragons and Warriors in their next three games, why not pick up Leilua for $350k now?

Vunivalu will play his third game of the season this weekend against the Titans. He averaged 68 PPG in his first two appearances and is set to make some excellent coin. There are some concerns about his job security with the Storms regular starters coming in and out from injury, although the money he’ll make from playing another two weeks will more than justify the required trades. You’d have to expect Vunivalu will be Bellamy’s first choice if more injuries occur too.

Nikorima has been named at starting hooker for the Broncos now that Andrew McCullough is out injured for what is believed to be six weeks. His main selling points are his cheap price tag, potential price rise and the fact he doesn’t have to play an additional two games to start rising in value. The main concern with trading in Nikorima is that Travis Waddell is named on the bench and we’re uncertain on how their minutes will be split. It’s all speculation at this point but it’s up to coaches to decide whether Nikorima’s potential price increase is worth the trade in. If you’re looking at a backup hooker option for your team, I believe it’s worth a punt.

COACHKINGS NRL – PLAY AT HOME THIS WEEKEND! CHECK BACK HERE FOR DETAILS

Mitchell owners experienced an unpleasant rollercoaster ride with the Roosters fullback scoring just 34 points last week while looking a little unconfident and clumsy. It wasn’t what we expected after his 103 point performance the weekend prior. I noticed that Mitchell was in my “Top 5 Most traded out players in your team” section and was surprised to say the least. It’s understandable that a number of CTW performers have because available at a tempting price, although it’s difficult to justify trading out a player with a -1 break even who is up against the Knights this weekend. Take a look at your options and try to avoid trading out Mitchell for at least another week or two.

Mannering looks to be missing a couple of weeks due his injury suffered against the Storm last weekend and has become a popular trade topic. It’s not just the injury that has annoyed coaches, but the fact the Warriors play just one of the two big bye rounds. Let’s not forget that Mannering has lost value after his short stint playing on the edge so you’d be selling him for cheaper that you bought him for. He should also be considered as a run home option for your team so you’ll be using another trade to get him in. There’s no harm in holding on to him for a couple of weeks then using him as a valuable addition to your team throughout the Origin period. You’re likely to gain most of that value he lost and won’t have to use another trade to get him back in your side.

Hastings is a controversial topic this week with coaches split on whether to hold or sell. Personally, I can understand the reasoning to both sides but I’ve decided to hold him. Mitchell Pearce has returned as half back so it’s understandable when coaches suggest he’ll take over most of the responsibility. Hastings has a 41 break even and averages around 52 points per game. The Roosters are up against a team that has let through a ridiculous amount of points in the Knights, so my suggestion is to hold off trading Hastings out for at least another week or two. He’d be unlucky not to reach his break even this weekend.

Te Maire Martin suffered a shoulder injury last weekend and is expected to be out for a significant time period. This means that he won’t be losing any value from week to week so there’s no issue there. My reasoning for selling Martin revolves around the perfect trade options to someone like Gareth Widdop, who won’t be available for his low price again any time shortly.  Not to mention other cheap options available through dual position players.

Hunt is another player that finds himself missing a large portion of the season through injury. Rather than having $248k sitting in your non-playing reserves, take a look at the abundance of centre/wing opportunities that have presented themselves. Vunivalu is the obvious downgrade option, while Radradra and Lailua are two upgrades worth considering. It’s worth putting your cap to better use.

$350k is too much cap to leave sitting on your NPR list for six to eight weeks, which is likely to be the time frame that Trbojevic will miss through injury. Coaches dodged a bullet as the Manly winger still managed to score 81 points in the same game he suffered his injury. Like Hymel Hunt, use Trbojevic’s money to bring in another performing gun or take advantage of the other opportunities available. This will keep your cap productive.

How long will you be holding your injury concerns?

COACHKINGS NRL ‘PLAY AT HOME’ DEMO THIS WEEKEND! CHECK BACK HERE FOR DETAILS!

nice write up cowboy. hard to argue with anything here, this week is pretty straightforward. top of the buy list for anyone who doesnt have him is the semi trailer. im spewing myself as i got manners in and no will have to hold for a few weeks.

Thanks mate! For sure, gotta take advantage of Semi's low BE, Widdops too. Unlucky on Manners mate, such a pain.

cheers mate yeah cant win them all. widdop is tempting too. pumped for this coach kings road test

How good will NRL CoachKings be! Any excuse to go to the pub

Will Parcell get a run this week? Was named last week and didn't play.

The Manly line up is a mess so unfortunately it's all speculation at this point mate. He seems to be a popular trade out this week although that might just be an excuse to get Kiko in you'd think? Barrett has been impressed with Api so it's hard to see him play minimal minutes. I'm just assuming Parcell will play minimal minutes but that's a complete guess at this point.

I traded Parcell out. 2 weeks named to get 0.

Smith straight in fark it.

He's been named out of the 17 this week so maybe he will…I doubt it though but if he plays can't see him playing big minutes. I had him and this week he suddenly put on 20 kgs, got a tan and became a winger 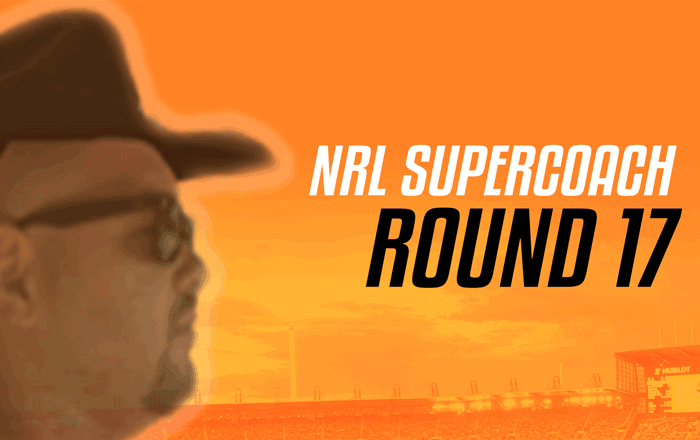 We’ll now need to be conscious of how our run home side will look like. Most of us already have a high percentage of Keepers in our side but we should have an idea of Read more… We can now breathe easy knowing three teams are done with their byes. The Sea Eagles, Knights and Panthers are the first teams to complete their bye rounds. We need to start thinking about which Read more…