I know what you’re all thinking, Maso’s on the Wacky Tobaccey!!

And you could be right.

However when I looked into Murphy’s record and seen he has played 144 of the last 155 H&A with an average of 20.5 games a season, and SC career average of 107.6 I had some movement in the trousers. *table and stats thanks to Footywire.com

Both were drafted the same year and not a lot separates the pair in the career stats. Pendlebury finds a bit more of the ball and has a slightly better inside game, with better contested numbers, tackles and clearances. This has seen Pendles dominate Murphy in Supercoach scoring, especially over the last 4 years. 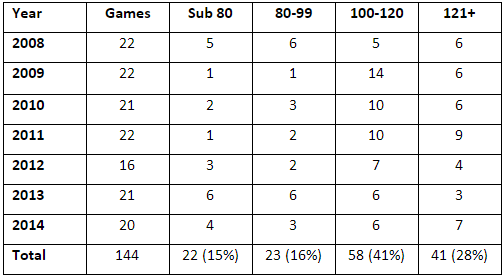 Murphy only managed 16 games in the 2012 season due to injury. He collided with Patrick Dangerfield in round 8 resulting in a sprained and fractured shoulder. This saw him miss a large spell only returning in round 16. His scores remained high and taking his injury effected score from round 8 out, he would have averaged 117 SC points that year.

2013 was an absolute mess of a year for Murphy. It’s hard to give a definitive answer for why Murphy slumped to such lows that year, producing his worst SC average since his second season with the Blues all the way back in 2007. Some blokes don’t take to the Captaincy all too well and Murphy would appear to be one of those. He may have focused too much on the leading aspect of his game and not enough on the bread and butter of actually getting the ball. A collision with Hodge and a broken jaw in round 12 may have resulted in a lack of confidence in putting his head over the ball, in turn reducing his contested numbers and SC scores.

Murphy bounced back last year to finish the season with an average of 106. This would have been even better (110) if you take his concussion affected score from round 22 out of his average.

Biggest risk with Murphy is injury, but he doesn’t have a huge history of injuries with the main one being the shoulder. Might worry that another concussion suffered in round 22 last year will see the confidence in putting the head over the ball suffer again in 2015?

At $570k I would be selecting him as a M5-M8 keeper. He won’t make you much coin but it’s not always about the coin sometimes we just need guys that will play and score week in week out.

With so many other Gun mids having their bye in round 12 Murphy’s round 11 bye is very appealing to the selectors at Muppet FC.

I won’t be selecting Murphy over Pendles but if he stays fit during the pre-season I can see him slotting into my midfield as a starter alongside Pendles. Potentially undervalued and not outrageous to suggest he is a 110+ player. Even better is he is a real POD with little to no coaches out there giving him any consideration. The emergence of Gibbs as a genuine elite midfield player and the return of Judd to fitness should help free Murphy up at different stages of the year With a good record against Richmond (121), West Coast (148) and Brisbane (156) who he plays over his first 6 games, a fast start is not out of the question.

Go on get stuck into me in the comments below

I must admit i've had him slotted into a few of my drafts, but he's the 1st bloke out due to the other options available in his bracket. I think Gibbs will really assert himself this year and juddy doesnt look in bad nick either, i dont think the blues will make the 8(captains blight?), but my prediction for murph is 90-100… very little value for me
Cheers Maso

I must admit i've had him slotted into a few of my drafts, but he's the 1st bloke out due to the other options available in his bracket. I think Gibbs will really assert himself this year and juddy doesnt look in bad nick either, i dont think the blues will make the 8(captains blight?), but my prediction for murph is 90-100… very little value for me

He's in my potentials. Thought I was the only one looking at him!

I had him last year from the start and he served me well but he through me to many stinkers near the end of the year and I just feel that their are better options for the price.

Holy Schnike Maso! You are making me consider Murphy. He's a very, very, very big long shot. Yet, with this solid article I will keep him in back of mind. Prefer Danger (as M3, Gaz/Pendles duo pairing for TF in 2015) because I think he has a better situation to throw up the big score and has a tastier price. Regardless, top notch review. Still may consider…but way in the back of the line.

Very nice Maso. Certainly some cause for debate. Murphy vs Pendles. No contest. Pendles by the length of the Flemington straight. Murphy at 570k will be a POD this season. If he could recapture the scoring form of 2011 then he’s value. Probably more of an upgrade target if he’s tearing it up. But he’s pretty durable so I’m not ruling him out for M5-M6 just yet. Great research Maso

Think that's spot on, INP. If he shows strong form and looks to be able to do better with the tag, he might be the perfect POD upgrade for the run home. Still a big maybe. But that's coming from no fracking way.

true i did forget to mention that having round 11 bye does help for trading him in during the byes if you don't start with him.

your right pieman maybe he is the poor mans pendles 🙂

Thats my last player article for the pre-season, . Although challenging at times with not being the very good at writing, grammar or even English lol i'm happy with the way most of them have turned out and has been a honor and pleasure to try and put some of the stuff in my melon to paper for the community. looking forward to reading the rest of the player articles from the lads also stuff like wombats defense insight, Barrons captains part 1 & 2 and all if you haven't already ordered your JR magazine pull ya finger out don't be the guy in your friends circle who waited only to miss out on the best thing since sliced bread! your friends wont want to share it with you trust me

Good stuff Maso, I for 1 have thoroughly enjoyed reading your ( as well as everyone else's) reviews over the pre season and appreciate the hard work you've put in.

Can't say I've recognised any bad English or grammar from you but even if I did I couldn't care less, I prefer the good insight and knowledge you guys share with us. As for Murphy it's under unlikely for me, although I didn't realise his scoring history was that good.

lol went to a irishman for help with english 🙂

Maso – on behalf of our proud community I thank you for a stellar first season of player previews mate. You could have fooled me about the writing thing mate – I loved them. They stirred debate, they got the conversation going, you layed the testicles on the line with brave calls – an absolutely ball burster of a series mate. Already looking forward to seeing you come in off the long run next season Maso – you're a belter.

Thanks Maso I reckon the Smurph will improve to 115ave this year, maybe even 130 over the first 5 if Judd stays as fit and dangerous as he currently is. He's very consistent but isn't a cash generator this year and I don't think I'll be starting him.

Agreed Womby , Judd is looking ripped may be a top 8 for your blues this year with a fast start and SC relevance of their bye.

Yeah I dunno whats going on at the Judd house Dools. I thought he was on a couple of million a year yet his missus looks like she's starving and he's been hitting the Sherrin like he wants to eat it

Great read Maso!
I was especially interested at the Smurf – Pendles comparisons.
If Smurf was 50k cheaper, I probably would have started with him. but there's too much value to be had with others in his price range.
Griff, Heppell, Wines come to mind.

Pleasure to have written article alongside you mate. Hope your wisdoms continue to be present within this fine community.

Great work Maso and stellar delivery all pre season.
Yeah that price bracket is stacked with options but you make a pretty strong case for Smurf over most.
60/40 for me, depending on how many other rnd 11 bye mids I start with.

At the moment i have Danger, Rocky and Smurf i think one may need to go and become a R12 buy in

Thanks Maso,
You have done yourself credit with your articles thank you very much.

Thanks for the write ups Maso. Don't agree with a lot of them but certainly gets the creative juices flowing.

Thanks G , im glad to have helped with ya juices…… i mean even if it bringing somebody to the for front for a big NO my job here is done 🙂

Maso your best piece to date imho, comparatives were surprising to say the least, he is now on my radar to watch where he previously hadn’t made a blip. Great work.

Thanks Maso this was great. I like Murphy a lot this year. Judd is fully fit again, gibbs is getting a lot of it and they've got a couple of big young blokes doing the grunt work. I agree that nobody should select him over pendles but at his price he is a bargain M4 and $50,000 underpriced

Loved your balls honest approach to these reviews Maso, they’ve been much appreciated.

Can’t see me considering Murphy unless something specials ignited but you did have me going there for a bit, just not enough arousal factors at the moment.

You've done a top notch job Maso !
Have enjoyed all your articles – many thanks.
May you and your Muppets have a season to remember.
btw – look after those trades !

LOL i will try mate

Great article Maso… I had him last year and wasn't to disappointed with his consistent output. As POD I prefer Kieren Jack and have him in my side thus far. Jack had a average of 102 compared to Murphy's average of 106 plus Jack is 20k cheaper.

It's a tough call but I defiantly can see where your coming from.

0 #SuperCoach points for Josh Kelly in the 3rd Quarter #AFLGiantsBlues

My midfield upgrade choices were Miller, Guthrie or Lyons in one spot and either Walsh, Kelly or Neale in the second. I went Guthrie and Walsh. #supercoach

What a week to bring Sam Walsh in 😬 #SuperCoach

It’s finally here, community. The big, bad, scary bye round that we’ve all been waiting for and hoping to avoid. Personally, at the start of the week I was looking at having 20, but rookie Read more…

It’s almost over everyone, there is a light at the end of the tunnel of the “bye rounds”. It’s been made tougher with the re-scheduling of the West Coast v Richmond game to last week, Read more…

This week the boys have decided to give the mics a rest. Your questions will not go unanswered though! Questions will be asked, and they shall be answered. See what we had to ponder below… Read more…