Kissed on the Bigboy?

WOWweeee! Pretty sure if you look up the word ‘Lucky’ a picture of Ben is next to the definition.

After being traded from the saints for Shane Savage & a 1st round pick (hmm who was the winner from that I wonder) Bigboy came out and went BANG BANG averaging 101.5 in his first 2 games for the Hawks before suffering a calf injury and missing the next 2 weeks.

Once he returned he went on a bit of a rollercoaster ride with his scoring going 65, 135, 83, 105 and then 28 which is when his Hammy went TWANG! And the Bigboy missed the following 6 weeks.

On his second come back from injury Bigboy averaged 107 for the next 3 weeks before his form took a U-turn to crapsville going 65 and 72 before being dropped for the last 2 rounds of the season and on the verge of finals.

The next few weeks the hawks showed why they are one of the great sides of the last decade disposing of all challengers giving them the chance to go back to back. You would forgive Clarko for thinking – if it isn’t broke don’t fix it – and Bigboy would miss out on another grand final appearance like in 2010 with the Saints.

But nope Bigboy not only trained the house down he was a dominant force in getting the Hawks VFL side through to their own Granny and was selected to play in the AFL Grand final where he would score a handy 93 SC points.

So after a fairly up and down 13 game season the Bigboy has a Premiership medal around his neck just 1 year after joining the Hawks.

Going into 2015 I guess the question we should all be asking is – Is Big Boy a viable option for our Supercoach Squads? 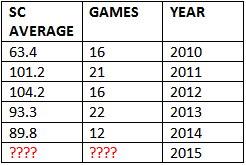 He’s a risk because he is a ruckmen and those blokes are as reliable as a Chocolate Fireman.

I think if you were going to select him from the start you would be hoping that he continues his pattern of games played, keeping him for the entire season and selecting him as R2 with a set and forget ruck combo, this could pay dividends.

Would not hesitate to select him for Draft leagues as you could do a lot worse.

I’m warming to him. He has proved in the past that he is capable of putting some pretty big scores. He is at a prime age in his footballing career to really start making his mark and by all accounts is really turning it on in training this preseason. With Hale turning 31 during the season you would have to expect Bigboy to do the majority of the Ruckwork. The negatives are going to be the same as many other Ruckmen as in they struggle to stay on the park. My final decision will come down to team strategy and balance as this is one line I have not made my mind up on how I will tackle it for 2015. If it’s set and forget then Bigboy will definitely be getting a look in for the R2 spot. Monitoring his preseason with a keen eye.

Great piece Maso, I'm not considering him ATM, but you never know…
2015 could be a return to form for Big-Boy.

I'm firmly eyeing a mid-priced ruck strategy at this time. Keruz, Leuenhameneggenburger, DogDog all higher on the list.

Thx Dex , even if i don't pick him up i will be watching him closely all season to see how he goes

Nice write up Maso and you make a strong case for him. But I cannot get passed the "reliable as a chocolate fireman". Firstly because if is bloody funny, second because its bloody accurate. There is just too much other value on the ruck lines this year with guys that are either as reliable or better and less coin. Cannot make a case for him at all against the likes of those that TG points out in Luey, Kruze and Dog, in addition Paddy Ryder and TBC have DPP status and I would rather run the gautlet with TBC than BigBoy.

must say i wasn't even thinking about him until i read this. Is he eally having a big preseason all ready? I'd say he will end up a pretty big POD and from this article has the capablities to really step up this year.

Thinking you might have swayed me. I'll be looking at him with a keen eye too from this point on 😀

From what i could find he is fit and firing on all cylinders (like 98% of players reported on) , Big PODs arent always good and that's the challenge isn't it finding the positive pods and not the negative ones

Very nice piece Maso. Who doesn’t mind a kiss on the big boy. Love it. Don’t think I’ll entertain Big Boy. He’s too inconsistent & doesn’t come across as a great modern day ruckman. I think the saints cashed in his chips at just the right time.

Hawks must have seen something in him, but that probably wasn't he's SC ability i'm guessing 🙂

Bang up profile, Master M. Last season went back and forth about starting Big Boy. Glad I didn't. Seems a bit of a Jack of all trades, Master of none. Which translates into decent but not outstanding SC value. Pass on him. Nic Nat still leading the R1 race at the moment. Well done and entertaining review as always.

Community do you think I'm crazy if I'm contemplating starting round 1 with Nic Nat, Kruzer & Luenberger & a Cheapie or are you thinking the same ?

not crazy at all a lot are thinking the same, well guess that doesn't mean anything you all could be crazy 🙂

Not crazy at all mate – as long as the research is there and you feel it in your guts. BANG. Back in your fortifications

Thanks for the reply gents & love the reviews great work

…Hang on a second, just got to warm up the pipes for a second…*ahem*

BOY, OH BOY, WOWEE, YOU'D HAVE TO HAVE THE BRAINS OF A HUMAN MEATBALL IF YOU PICKED MCEVOY WHILE CHEAPER OPTIONS LIKE KRUEZER AND LUEYHAMANDEGGENBURGER, YUM I"LL HAVE ONE OF THOSE IF YOU DON'T MIND, PASS THE SAUCE WHILE YOU'RE THERE, ARE AVAILABLE TO PICK IN YOUR SUPERCOACH SIDE.

Whoa, got slightly dizzy there for a second. Anyway, I don't think he is a keeper, so don't see that much point in the initial investment. I currently have 5 rucks fighting for my 2 ruck spots at this stage and McEvoy isn't anywhere near that list.

Great read Maso,
Greetings from sunny Mildura.
At this stage Big Boy McEvoy has two hopes of making my squad as a roll up starter – Bob Hope and No Hope!!
There is just to many better options out there to generate coin and score solidly.
100% No!
I love Saturdays – "To the fridge!!"

to the fridge indeed Dools 🙂

Great work Maso.
Yeah that inconsistency has the stench of a thousand Reltons. With Hale still lingering and Ceglar emerging, his solo chances are going to be lean. No for mine.

Great write up Maso. Will be a no from my end at this point, but I don't think it's beyond him to solidate that #1 ruck possie and average up around 105. Just too many lining up in front of him… boyyy howdeyyy woweeeeeee

Thanks jock , depending on other risks i may just put my aggots out there and run with him yet. over the next couple of months i will be watching him closer than a Ryan Crowley tag on Stevie J

Great review Maso. Im with Jock (no surprises there), very unlikely to pick BigBoy. Be a ballsy call whoever does pick him. No denying the potential is there to average 100+.

Im likely to put up a makeshift ruck (and def by the way the dpp's have fallen). Gonna go BLING BLING in the guts and fwd line.