Ruck option or not?

2012 was his break out year averaging 105.5 before being cut down with injury (calf) and only playing the 15 games. In 2013 Paddy’s form slumped and he had a drop in just about every stat before bouncing back in 2014 with a fairly consistent season and averaging 101.1.

His scoring is defiantly a lot better when he is the main ruck option and just resting forward, averaging 107.5 (12 games not including injury rnd 2) without Bellchambers and 99 (7 games) with him.. He is no Sandilands but paddy did rank 7th for 2014 for total hit outs averaging 26.1 per game. 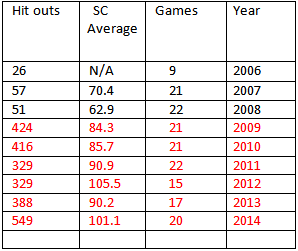 I see paddy as a 105 average player (when rucking solo) so there isn’t a lot of room for improvement left in him and his price is about topped out, also if he doesn’t get more ruck then forward time he tends not to score as high. Moving to Port Adelaide could be a bad move fantasy wise with Lobbe being a solid ruck as well. The other risk we have with him is the whole asada debacle which I won’t go into (being a bombers supporter I’m tired of it) but possibility of a late start to the season is there.

With so many other ruck options around the same price you wouldn’t select him for any other purpose then a Draft league.

2015 sees him likely on the move to Port Adelaide (confirmed team Port Adelaide) who only as Lobbe he could get back to that 105 average again if he is the number 1 ruck and not a pinch hitter, but how he fits into a team with a pretty solid ruck in Lobbe who was ranked 4th overall for hit outs in 2014 ?

I just can’t see them both being able to maintain those averages while being in same team. Only 1 team, I can think of, that had 2 rucks that both scored well in a season,

Ryder & Lobbe are good rucks but they are no Cox & Nicnat .

Sad to see him leaving the Bombers, can’t see him getting a starting role in my team for 2015 but I said that last year…..

I agree with you on sharing the Ruc load will reduce his scoring potential. Plus infringment notices are being issued soon (Soon as in sometime this Decade) So unless Lobb breaks a lower limb between now and game 1. NO from me.

Keyboard and Next “G” device don’t like the way he got himself released ….. Played a low card in their book.. So I’m not even going to attempt to take him into consideration for 2015 Full Stop

“Reseach” in Ruc Dept required for me …

Thanks Dools,
rucks kill me every year 🙁

Great write up Maso, even as a bomber man I can never find a spot for Paddy, tends to go missing in games and as you pointed out unless he is one out in ruck he struggles to bother the scorers. Rucks in 2015 going to be very interesting. Nicnat looking better all the time.

Nicnat is Top of the list of wants for sure General

Super read, great work Maso – was actually thinking about going Ryder in 2015 thinking a change of club would be a good thing but this article has rebutted that train of thought.

Keep the good work up

When i started on this article i had Ryder high on my Maybe list but then when Port stepped into the picture and stole him from brisbane i decided No, his age and progression for a big man is primed but i just cant see Port shafting Lobbe and giving ryder R1

Top stuff Maso – after reading that there is no way Ryder will be entertained in the Mayhem in 2015. Will be interesting to see how Port will operate with both Ryder and Lobbe in their side. Surely Ryder becomes a thrid tall forward and they don't drop Lobbe??

Thanks Mick ,
Agree Lobbe would have to keep R1 surely , so maybe the Hoff plays more as a defender and Ryder goes tandem with Shultz ??

One of Hoff's biggest strengths is he's adaptable. I could see him playing as a floater and just filling in where he's needed. Port getting a shellacking? He'll go back and fill up the holes as a loose man. Otherwise he can move forwards when Ryder goes to the ruck and could even push a bit further up the ground as a tall target to get the ball inside the F50… I still hate the guy though.

Absolutely agree Maso – great assessment my friend. I'm seeing a lot more time up FWD this season with as you say Lobbe a solid primary ruck. No for me as well at this price.

Ripped of an article, Big M. Had same Paddy to Mummy experience. Brought back painful memories. In same boat as everyone else. Unless Lobbe goes down, in Team TF Paddy won't be found.

Majestic Stattage Maso! (I made that word up)

Rucks will make or break in 2015 i think

I will also say, i think his estimated price is unders – I'm calculating 543k

Hi Dex
DPP and 300k I would think about it at the risk of having a hardware revolution. But that is not going to happen is it.

LOL the difference is its either in your hot hands or some one else's….

Currently looking at Big Ivan Meric 7 Hungies in last 8 games only played 13 all year and did not play 1 st ten games of the year (Tigs were 4 W and 6 L I think!!) So Richmond need him and win with him I mean 10 in a row after round 12 to make the 8 and he scores well……

Not that i'm starting any of the above but food for thought or in my case Drinks to ponder on .

Maric did bring home the bacon. Concern with him, as it will be with most rucks not named Goldstein is how they'll hold up. Having ruck coverage will be a key in the planning. Lycett will be a watch list wonder preseason and first couple games.

And I'll whisper another name that may be worth keeping an eye on…Grundy. What's keyboard say about him? (and say hi from me while you're at it Dools)

ey TF
Word ….Ruc's Must be, Set and Forget… Spend in that Dept. most thing fall in place..
Yet again Grundy is a no at this stage I can't see value at scores of 60 for: I 'm thinking 300 K plus Nah he was an under achiever and not likely to improve this 2015 season. I'm thinking a pick up very late in the season or a start in 2016 but not a chance this year. I have been wrong b4 so I hope it works the way I see it..lol More Research Throttle and I love Research

Bucks is going to demand a tad more from the kid. Showed a lot potential in 2013. Didn't step up to the plate in 2014. Think learning the mental end of the game. Think if he comes out strong in preseason and shows that aggressiveness of 2013, he may be a worthwhile R2. Especially if you go big $$ on your R1.

Pretty firm NO based on yesterdays news.

Attention turns to what he's left behind.

Giles at around $350K could be worth entertaining, tho history doesn't point to big scores.

Agree. Giles is not a ton-happy ruck. Is servicable but not dynamic nor formidable enough to consider.

OMG!!! Essendon 34 players have been issued infraction notices I fell like Christmas has finally arrived in a bad bad way.

Paddy is a no for me also.

Like the possible combination of Sandilands, Nic Nat, Lowden (ex-Hawk at Adel), and cheap swing man.

Interesting to see the Essendon team line-up without those who were involved (test rats) in Hirds lab experiment. That would bring up some unlikely SC point scorers.

‘Ruck’ the only position that rhymes with f… and for good reason in our SC wonderland! We were blessed last year with sandi, and with Cox gone this year the pickings get slimmer. Like the idea of Lowden, on the WL already and will track close PS. All going well I’ll probably use a set and forget of Jacobs/Goldy with Lowden/similar and a rookie swingman if there’s a half-decent option to put in the fwd line. Just so little flexibility in the ruck department in SC it hardly makes sense to put your risks in there which, all things being equal, is why Ryder and Lobbe won’t be on my starting field.

NicNat, Kreuzer & Leunburger for me. Hoping Kruze is R/F so I can pick all 3

Call that trio "The asterisks three", Phil. Lots of "ifs" around them. Or call them the "wait 'n' see gang." Lots of risks tied to each's rewards. We shall see.

What about Ryder now with his ruck/fwd Dpp status?