Flesh for Fantasy – Round 14 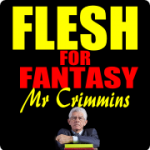 However, we move on and keep striving towards SuperCoach supremacy. Not long now ‘till the finals and with most sides all locked away, it’s all about fine tuning and getting guys in on form and dumping those stinking it up.

Anyway, here is this week’s Flesh.

It has been a big turn around in form from the start of the season to now. Was looking very ordinary early on, but has really hit some form of late. Since the bye, he has been red hot – collecting 30+ touches and kicking multiple goals. Since the Essendon/ASADA nonsense has picked up again, he’s gone up a gear. While he does have a somewhat tough run home, I reckon given price his is a serious shout to have a good run home. The out of Daniel Hannebery creates an opportunity to get Zaharakis in.

Flown under the radar somewhat, Smith is getting plenty of the pill playing in defence. 25+ touches, a touch under 10 marks and a goal a game is warranting consideration. Take out that 67 against Carlton and has been in sensational form, and given his price, I reckon Smith is definitely worth getting in.

Who for? You could look at moving on someone like Michael Hibberd, who looks out of form somewhat. If you’ve got $$$ in the bank, maybe look at upgrading a Langdon or a Webster. Either way, reckon Brodie Smith could be a goer.

Budwa is back. It looks like it has all clicked for big Bud and the Sydney Swans, and he is now flying. Another one who started the season slowly, Franklin now is cheaper than his starting price, has a really solid run and form and has a lot of winnable games in their run home. The thing about Franklin is that he’ll collect 20+ touches to go with his 4-5 goals a game. Plus having Kurt Tippett gives Buddy more of a license to roam around and get more of the footy up the ground.
I did believe it was only a matter of time before Buddy would come good, even though he struggled early on in the season. Now he’s the chance to get him in while he is under $500,000. Get on the Budwa express.

It took Anthony a bit of time to work his way into the Richmond side, but now he is in and looks to have cemented his spot in the Tiger’s midfield. I was always surprised why he never got more of a go while at GWS. However, he has been presented an opportunity at Richmond and so far looks to be the goods – an 83 first up backed up by 108 SC points. He is spending time in the guts too, amassing 30 touches against Fremantle. If in need of a downgrade option and a bit of cash for the kitty, Anthony Miles is your man. Last chance before he goes up in value, on the bubble this week.

If you didn’t get Fasolo out when I suggested to a couple of weeks ago, here is your opportunity again now that he is expected to miss 2-3 weeks. Had screw removed from his foot.

Out for 6 weeks with an ankle injury, and given how close we are to finals, time to trade Hannebery out. High value means we are able to trade him to a premium/ultra premium.

He has exceeded expectations this season given his history of chopping out 3rd degree burners to those who traded him in. However, I think he has run his race. Been a solid contributor, but his influence on games are just not what they were early in this season. To score 46 SC points from 19 touches, and collected 15 touches against Brisbane suggests he is done and now must be moved on before he drops below $400k and become unmovable. If you’ve got the $$$, Buddy is your man.

Here the key break-even scores to keep in mind heading into round 4:

Unfortunately, I’ve had to close the Pub for this week. However, tweet me at @Mr_Crimmins and not only will I answer the questions already asked, but I extend opening hours and take questions from everyone.

Get the Scoop On All The Teams This Week:

Round 14 Supercoach Prices and Breakevens

Should I bring in Callan Ward this week. He is in ripping form but worried about a few things. He still has to vs Collingwood and Fremantle. He has Bulldogs in grand final and historically doesn't score well against them.

If this was my team I would trade Suckling, sub Mcveigh back to defence & bring in Anthony miles. Miles will out score suckling & you will make some much needed cash. Lloyd to Stefan Martin will cost you 20k. Good option as well

Surprised you couldn’t find a place for Stefan Martin in the get him in Crimmo. Agreed it’s time for Missy Higgins to be moved on!

current mid looks like this: pendles, ablett, beams, libba, sloane, selwood and mitchell with one vacant spot for the mid fielder.

Ben Brown from North Melbourne is a much better option and he is also a ruck forward swing. He has been named as an emergency this week and could possibly get a game in the near future! But i like your plans.
Rockliff could be a good option in a couple of weeks if your willing to hold off otherwise Stevie J is quite cheap if you wanna save your cash for later upgrades

Great right up Crimmo.
I'm almost at full premo with Higgins and Langdon on field, with 113, 500K and 8 trades.

I could go Higgins and Langdon to 2 cheaper options this week (rioli/Shaw)
OR
I could down grade Langford (D8 with gardiner at D7) to a cheap rookie, and upgrade Higgins to Gray this week and Langdon to another premo next week.

Which way do you think I should go?

Higgins to Wingard makes you money. Hold Langdon, Sam Mitchell back soon & will be a similar price to Langdon in a month. Comes back at 500k with a BE of 200ish

I like your suggestion but I can't see WIngard averaging more then Higgins from here on in at best an 85. Mitchell on the other hand may be worth waiting for . Maybe I'll go Higgins to Gray and then Langdon to Mitchell later.
Rioli at that price tempts me though. However if I trade him in, it will be the third time I trade someone out, and then trade them back in (started the year with Hurn and Ambrose, traded them out due to injury and got them back in now).

Haven't heard much about him, HoD. Not even making the emergency bench so I suspect her has slipped down the pecking order a bit. I'm holding him until a forward rookie comes along e.g. Honeychurch. Kicking myself for not getting McGovern

Just listened to the latest podcast, they just discussed it there, with pretty much the same reason as you said!

Disappointed to use a trade, I have hannerbery… Should I get jpk or ward?? Worried that jpk role will change with hannerbery out? I had zaharakis at the start of the season so I’m not bringing him back.