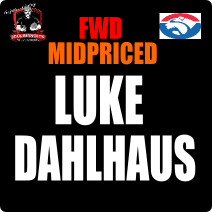 There’s history between this kid and I.

And after our very public run in on the Fox Footy Supercoach show last preseason you might wonder why I’d consider looking at the kid as a fantasy option in 2014.

Firstly – I’m not one to hold a grudge. It’s true. Luke was guilty of disrespect of this highest order when he invited me to Whitten Oval for a punch on in reaction to my fury towards Brad Johnson for suggesting that Shaun Higgins was worthy of consideration in 2013. He’d know that now and I forgive him.

He was flying the flag for him mate. If anything it showed me that Luke was a bloke you want in the trenches. A bloke you want with you at the pub when some prick wants to have a go. A bloke who loves his mates. Sticks up for them even if they happen to be one of the biggest fantasy footy burnmen to grace the field. A good man.

And I want you to listen very hard now. The other reason is this: You must take emotion out of your team selection. You must. This is the first thing I drum into young fantasy footballers when they start out. Lose the attachment to players from the team you follow. Strip yourself bare of any bias you might have borne out of loyalty to a certain team or a certain player. This is bloody business and if you open the door to emotion you’re not cut out for this caper.

And thirdly my beloved flock – I reckon Luke Dahlhaus has what it takes to make that majestic leap from flashy midpricer to trouser stretching premium.

As I said – I’m sure he’ll reach premium. But will it be this year? Can he find the consistency we need from our top line options?

2014 Predicted Status: Midpricer
Predicted Average 2014: 85-96 SC
Selection Status: Unlikely to be selected in my initial side

I just cant look past his inconsistency throughout 2013, and cant shake the feeling that he might be a season or two off spending more time on the ball. I feel he needs to get this time in the middle if he is to make a premium of himself this season.

He’s a considerable goal kicking weapon, kicking 16 goals in the last 8 rounds in 2013. As a coach I’d be laying my spuds on the line by pushing a bloke like that too far away from the sticks into the guts before some of the other kids can find their feet.

He won’t be the worst selection going around, and could very well be that bloke that blows the roof off the joint this year.. but I’ll pass for now… what are your thoughts?

Cheers Anthony good to hear from you mate. I suppose the other way to look at it is that he might just be that important player that – when on song – really ignites the Dogs? Been watching him very closely and really believe he will be quite an onballer if he's allowed in there. Who knows – this could be the year

Great analysis Jock.
Price is pretty orkwurd for mine.
Fair nuff his last 8 were golden (the coach musta found the on switch after rnd 14)

That said, 4/8 were tons vs limping sides in GWS. WC, Carl, Bris

Certainly worth a watch early on as the dogs look to find some form with a reasonable run into the bye.

Jock,I’m not going to say good article or anything you and your team never disappoint. Back to busine,Lots of upside and in 2015/16 will be a big fantasy player, but not for me this year. Mid price forward are needed this year but his price is to akward.

Hmmmm.
I’ve read the article twice (with a beer between readings)
I can see where you are presenting the case for the young fella but the if’s , but’s and maybe’s are just too big for me ATM mate
He is to good around goal, The midfield is full even with a proposed tagging role now for Boyd No not for me ….This caper is funny though he may just wack out some fantastic Avg and we will all say “Where did that come from!”
Going back to the fridge. I will read this again.
Cheers Jock nice read

This is an excellent article. Why? Because it plants a nice seed for the season. Meaning, I don't think between now and then it could grow into something worth putting into my R1 team. But keeping an eye on him as he's watered the opening rounds, he might be worth a punt come Round 5-7.

And the hair analysis, Jock. Utterly beautiful in its scientific leanings. I've notice players do better when they take the top down to the nub. LeBron. Cal Ripken. And, of course, Kojak.

What ??? He cut the lock's…. Right that's it…Went to the fridge, no cold beer….Cool I said, I will have a whisky instead……..Desiaster no Irish left….Damn….25 year old malt Glenfiddich ain't so bad even with ice but you have to drink it quick, don't want water ruinin' it Just like Lukey's hair don't [email protected]# with it but now the point is mute.
No Hair No IN My Side, damn the ice is melting
Maybe a post bye trade in, if his hair grows…….LOL

Dammit Dools. Can't you put the same brilliance in your SC planning in your drink planning?!? Like your team, needs to always be stocked and ready for a go.

No wonder Jock and all of us love this caper you two gentlemen are great for our game. Love it Dools and Throttlefinger bloody legends keep up the good work.

A pass for me at the moment, great player but I don't like him in SC terms.

You know what! He is in my team ATM. Look at the holly bible of AFL pg 390 room for mid price fwd in fantasy structure and the big one pg 398. Easy Draws after all Jock you should know the AFL bible doesn’t lie!!!

Pass for me, this year won’t be his year… Nonetheless great article Jock

Yeah not attractively enough priced to warrant selection by most coaches I would expect.

Just spend about $50K more and you can have your pick any of the Swans best forwards such as Buddy, Tippo, Parker or Titch.

Wonderful post, you have gained a new follower. Cheers!

He has blistering speed and acceleration that a lot of clubs were working into their midfield rotations last year. I guess it all depends how the bulldogs play this year. I would 'guess' he will rotate thru the midfield in 2014 but he is a huge risk as he downside isnt up to it.

Just read this now, and his preseason scores so far have both been tons. Doggies start with a pretty decent run so why isnt anyone really giving it a good thought with his price?

also to mention, he knocked up a lazy 124 at Simonds against the saints in the first preseason match when the conditions reminded me of VFL Park. if he was dual position everyone would be jumping on him. He is seriously flying low on the radar.

Top 10 Fwd this year! other positives are, hes 21, also is ranked elite in dis,contested pos and tackles, and did you know last year was the No1 rank gen fwd!!,its simple if you dont get onboard you wont win…