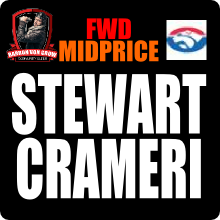 From Bomber to Bulldog, that’s where Stewart Crameri finds himself in 2014.

Forwards are looking like a tough pick this year, and a midpricer like Crameri might be on a few peoples radars. Let’s take a look at what The Barron thinks is in store for SC in SC.

Traded from Essendon to the Bulldogs for Pick #26, the Bulldogs will be hoping Crameri will be able to help fix some of their goal kicking issues they’ve had the past few years. Mostly relying on sub 190cm players such as Giansiracusa (who may only have 1-2 more years left) and Dickonson as their leading goalkickers for most of the year, Crameri should be a nice forward line addition to pair with the 197cm Liam Jones, 2nd year player Jake Stringer and other tall targets such as Tom Campbell (I like this kid) and Jarrad Grant and Ayce Cordy should those two get games. Crameri kicked 30 goals in 16 games last year, a rate of 1.9 a game which would have given him the #1 goal kicking average at the Bulldogs, beating Giansiracusa who averaged 1.8 a game.

The biggest news to hit about Crameri is that the Bulldogs aren’t planning on keeping him as a stay at home forward and has been seen training with the midfield group, with the Bulldogs planning to have him push up the ground at times during the game, with Crameri commenting.

“I’m doing midfield stuff once a week now, so I’ll hopefully get a hit-out in quarters, late in quarters, just to change it up,” Crameri said on Wednesday. “I think that will be an important role for the team. That will be a really good chance for me to have a go in the midfield, when I haven’t had that chance for three or four years.”

This is what is going to be the biggest thing that will make or break Crameri as a Supercoach relevant player in 2014. Looking at Crameri’s past 4 years, we can see his average has been decreasing since he became a full time player in 2011.

So we can see his peak average of 83 points came when he averaged 16.2 possessions a game and since 2011 his disposal average has fallen to the 13 range and this is reflected in his SC average falling below 80 for those two years.

So this is where the midfield move kicks in, which should hopefully see his disposal average increase and his SC average increase along with it. If he can get some good TOG% in the guts, then this is what will make him SC relevant, as well as him still spending enough time up in the F50 to keep that goal average in the 1.5-2 goals a game range and still taking 4-5 marks a game. It’s not outrageous to think that he’ll easily get an extra 5-6 possessions a game if the midfield move pans out, which will make him a very nice looking initial player to have in your side.

Now it’s one thing to say “Yea, we’ll play this guy in the midfield” and then actually doing it. The fact that he’s been training with the midfield group is a positive sign that the move will actually happen, but keep an eye on Crameri and the Bulldogs and know the selection comes with some risk knowing that plans change and Crameri may be moved back down to a permanent forward if he doesn’t perform as a midfield player.

Great article again, make some key points. Have to admit that I haven’t even looked at him yet, now I’m quite intrigued, especially if he does spend some time in midfield

Can understand that sentiment BeaglieBoy.

I never see him being in my side!

I'm still 50/50 on him myself SCMania, but I can understand people who will be looking elsewhere for sure.

What do you think about Shawn Higgins.

Not much old David – in fact old Shauny boy is first cab off the rank in terms of BURN men in the little black book of Jock Reynolds. Burnt me too many times to consider

Nice case for Crameri, Barron. May be a cheaper and more reliable alternative to his teammate Chappy.

Thanks throttle, I think he's one we can definitely consider as an option in 2014, but that's only if the "midfield" promise pans out, although you'd have thought that may have been a reason for him making the move over to the Bulldogs.

He's a wait and see at best because of that. If he isn't getting results, sure that promise will be quickly withdrawn. Worth keeping on the radar.

ex teammate .. and even then not really, Crameri left just before Chappy started with the Dons. but I see what you mean 😉

Will be interested to see how he goes in his new colours but just can't fit him into my own fantasy structure given his price and all the other demands I have elsewhere in my team for the $10M.

Yea, I've done a few teams now SCaddict and i'll admit out of the 6 different sides I've made I've only been able to fit him in 2 times. It is a bit of an awkward price and i'I've gone Josh Caddy the other 4 times, but I've still got him on my shortlist for now in the event of some $ opening up.

Yeah you really have to watch that one. I remember that being said about Breust in the previous offseason but he barely played a lick in the midfield in 2013 and actually finished with a slightly lower average than 2012.

Nice write up Barron but…. I Agree with Jock and SCaddict.
The amount of times I have heard that "Training with the Midfield" Chestnut ! Jeez
I'm more intrested in Talia 3rd year player and by all accounts ready to move fwd in the gossip I"m hearing attributed to Brad Johnstone . I would be leaning towards Chappy cheaper and a proven player if his leg holds up or even a X. Ellis WCE if ready to go!

I know, Jock, I know, they can talk him up all they want in the pre-season, but it's meaningless to us until he's actually out there on the field running through the middle! The fact he's moved over from Essendon makes me think that him getting a midfield run was a part of the reason he made the switch, which might increase the chance of it actually happening.

If he floats up forward he is an interesting proposition – potentially more points for more posi's,tackles and inside 50's. Watch eagerly.

Crameri is sizzling hot. So hot he will BURN you. Take him at your peril.

All fine options, Bremmo. I'm still weary on Hawkins a tad since his back issues (bulging L4-L5 lumbar discs) aren't fixable, and can only be managed, but then again, him kicking 49 goals with a bad back means if he can get it under control he'll probably be a dangerous player and a very good buy, especially considering his decreased starting price. I'll be mentioning both Hawkins and Caddy in my Geelong review, so keep an eye out on that.

Tex is still iffy, i'm not 100% sold on the Round 1 boast they've made recently, but we'll have to wait and see how he looks after they return from Christmas break as that's when he'll start with the shard turns and such on the track.

#supercoach
Make trades for first week of finals? (It's an elimination final for me)
Have 3 trades left so it would be my final upgrade

SEND QUESTIONS! Reply to this if you've got a dilemma in #SuperCoach or #AFLFantasy?

@NMFCOfficial update: "Has been ruled out of this weekend’s clash with Geelong... Suffered a delayed onset of concussion following an incident in Saturday’s game against Carlton."

G’day community, Dyl here, stepping in for the busy Fozdaddy this week. COVID-19 is wreaking havoc across the nation so I’m sure there’s panic setting in amongst the community. We’ve got players isolating because they’ve Read more…

What a week it’s been, community. But it’s the last week before finals so hang in there. Like I said last week, it’s the business end of the season, not a lot of spare trades Read more…

Around the Grounds – Round 18

Hello everyone and welcome to another edition of Around the Grounds. It’s difficult times for us all at the moment, with a lot of the country in lockdowns of some description, we here at Jock Read more…