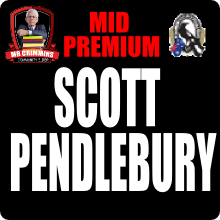 It’s been an exhausting off-season.

Not long after the Hawks took out the premiership, we were knee deep in the free agency period.

Then trade period came along. Followed by the draft and now we sit on the border of 2014 almost a month out from SuperCoach returning again in 2014.

A wise man, sporting a moustache, once told me that Rome was not built in a day. We begin building the foundations of our road to glory now, and no better player to look at than the human Rolls Royce – Scott Pendlebury.

I call Scott Pendlebury the human Rolls Royce because a) he is all class and b) he glides around the field with ease. The Collingwood captain-to be had a sensational 2013, averaging 29.9 disposals (going at 77% disposal efficiency, which is the best of the top 20 disposal getters in the league) and laying 119 tackles, which too was comfortably the best in the top 10 disposal getters).

Scott’s ability to win free kicks and the one %s was significantly high too. Averaging 1.7 a game, Scott was awarded more free kicks than Gary Ablett and his one %s were also greater than Ablett’s, third only to Sam Mitchell and Ryan Griffin. So statistically, Scott Pendlebury had the ability to influence the game at an elite level.

Pendles is heading into what many perceive to be the “prime years” of your career. Turning 26 early New Year, natural progression suggests he’ll be even better than what his 2013 season reads. If he were to receive the captaincy, it would elevate his game to another level; such is the character of Scott.

What also should be noted is the burden of work Pendles will be shouldering. He is almost the linkman between the young midfield brigade coming through, and old warhorses like Swan and Ball. Add leadership, as mentioned above, and he could really tear next season to shreds.

Classy and a bloody good footballer, Scott Pendlebury is points in the bank and a safe bet. You know what you’re going to get and is one that you can select with no concerns about his performance.

His price at $683,100 is on the expensive side, so you could wait until he drops in value. But on the flipside, if you’re waiting for both Gaz and Pendles to drop in price you run the risk of chasing the pack early on.

None come much safer than Scott Pendlebury. Must be strongly considered.

He would have to pick one before he hangs up the boots. So much time when he has the ball. So damaging. Such a prolific scorer.

Love the name Rolls Royce. May take to calling him Phantom. Excellent point about waiting on Pendles and Gazza. Struggling with the "lock in and wait 'til drops" with the elites. Saving $82K to get Jobe with the hopes that a mid pricer gets hot seems risky (and time consuming). But your insight has help give perspective, Mr. C.

Very neat article Crimmo! Straight into the thick of it, backed up with superb stats.

Pendles' average over the past three seasons speaks volume.

Impossible to past up.

An article saying, you get Scott Pendlebury or you die in 2014! 140 could be the limit of his scoring this year!

Brilliant once again by mr crimmins

Nice Crimmo, nice.
Great read mate and he is surley a lock for everyone now..

Great read!! He was always a lock for me and this article just rams home that point – the Human Rolls Royce and my sneaky bet for the Brownlow even before the first bounce!!

Yes he is a jet… But are we forgetting Beams will be in the mix this year who is just as prolific and wins his fair share of Pendlebury's ball also…. may just take valuable points off the gun. If you remember 2 years ago it was Beams with the super high scores of 140 – 160 thus his starting price of $647k or their abouts for 2013, much more than Pendles.

Sorry gentlemen Pendles was 10k more than Beams for 2013 but I think you get my point.

Why did you have to go do that? I was happy not starting him this year but after i read this, I must be "Mad" if I don't go in with Pendles in the side.

Back to the drawing board for me.

Both Gazza and Pendles will cop a tag against Freo in rounds 1 & 2. Something to think about.

Thoughts on starting with both GAJ and Pendles in my side? Blown the budget by 200k so may have to cut one.

Worth noting his opening three rounds: Fremantle (Crowley), Sydney and Geelong. If a price drop is going to come, it's going to be with this tough start.

I have got both Gaz and Pendles in my starting line-up. You have to have both at some stage anyway, and you can free up cash by getting in Beams, Daisy, Murphy, Suckling, Sandilands etc.

Definitely worth the money, and I wouldn't be scared off by both of them both playing Freo early on, as they are two players who are good enough to avoid the tag.