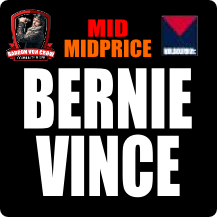 “One day you’ll get caught with your pants down” was the motto of those Underdax ads on the television when I was a boy.

Well, it actually happened to Bernie Vince in 2012 and he’s now found himself gonski! Traded from the team he loved, moving from the Adelaide Crows to the Melbourne Demons during this months trade period for Pick #23 in the National Draft.

As for 2014, let’s take a look at how The Barron see’s Vince’s chances with his new team.

The Demons got themselves a top notch bloke to put in their side (Taylor Walker suffers another loss, first his Mullet and now his best mate), who’ll provide immediate help to the youthful Demons midfield, but is he going to be able to reverse the form he showed with the Crows and provide some help to our Supercoach side in 2014?

Many were expecting great things from BV after winning the Crows B&F award in 2009 and managing to almost crack the 100 point average in SC. It’s been nothing but bad times since then for Vince though, facing multiple disciplinary actions for missing team curfews, and the (unfair) criticism and official reprimand he received for the “pants down” incident during the 2012 off-season, to go along with inconsistent football that’s seen him dropped multiple times due to poor form and a seemingly lazy attitude.

Bernie has been on a downward spiral these past 4 years. He entered the AFL in 2006, only playing 10 games his first 2 years, but he quickly started producing when given a consistent run of games in 2008 and had an absolute blinder of a year in 2009, starting to show promise of becoming one of the best midfielders in the AFL.

We can see all key stats moving upwards as we’d expect from a young, emerging player. Vince recorded increases in games played, disposals (both kicks and handballs) marks, goals and tackles. 2009 was his B&F year, peaking at a fantastic 27.5 disposals and 5.9 marks a game.

Now in his last 4 years we’ve can see the continuous downward trend from Bernie, falling in kicks, handballs and as a consequence, overall disposals. We can see this reflected in the Supercoach points he’s been producing.

The first 4 years is the type of thing you love to see from players in Supercoach. May have started off slowly, as a lot of rookies do, but recorded a massive 40 point jump from 07 to 08 to become an 80 point scorer, to see that sort of jump today would have had our radar’s beeping like crazy! Then to jump up another 14 points to a 97 average in his 4th year, we’d all likely be scrambling aboard if we were picking a 2010 team.

Burnman! That’s what we’d be saying to ourselves (And Crouching One would probably ninja kick him) if we had of picked him in 2010, his average fell a full 20 points, the stuff of Supercoach nightmares. Since then he’s been yo-yoing up and down, averaging in the high 70’s and 80’s since then.

2013 wasn’t much different, Bernie didn’t exactly set the world on fire at the start of season, finding himself dropped for the Crows Rd 4 clash with the Bulldogs after averaging a paltry 47.6 SC points in his first 3 games of the year. Not the first time he’s been given the boot for a seemingly lackadaisical attitude on the field, he managed to keep himself in the Crows side for the rest of the year, averaging 83.83 SC points over his next 18 games. When he’s on, he can be one of the best guys on the field, as seen in the Crows fantastic win by 1 point against North Melbourne in Rd 9, where he netted 21 disposals, 2 goals shown and a season high 122SC points. On the flip side, his stinkers can be real smelly, with Vince posting scores of 46, 59, 59 and 43 during the year, proving what a wildly inconsistent player he can be.

So how will he hold up in Melbourne’s midfield? He’ll go from playing with a range of talented midfielders like Dangerfield, Sloane, Thompson, Douglas and Van Berlo and youngsters like Brad Crouch, Jarryd Lyons and Mitch Grigg to former Bulldog veteran Daniel Cross, the underrated Nathan Jones and a bunch of talented kids still trying to realise their full potential like Jack Trengrove, Jack Viney, Jimmy Toumpas and other newcomer Dom Tyson and the rookie Christian Salem. He’s not the type who can dominate a full game anymore, but he can pop up for spurts, so it will still be up to the likes of Cross, Jones and Trengrove to do the heavy lifting for the Dee’s midfield.

The Demons will need him at his best though, last year they ranked dead last in possessions at 318.6 per game, a full 16 possessions less then 17th placed GWS and 60 less than 1st placed Collingwood. Adelaide averaged 49.2 more possessions than Melbourne in 2013, so it will be hard to see Vince managing to eclipse his 20.6 possession count. Even with that midrange disposal effort, that average would have placed him 2nd in the Dees for possessions last year, (he ranked 6th for disposals for the Crows) and 1 of 2 players to average over 20 possessions a game, the other being Nathan Jones at 23.14. The Dee’s disposal count was 15.44% below that of the Crows, so if we applied that sort % minus to BV’s disposal count, his average would have hit 17.5 disposals per game. Neither elite, but both can get the job done on their day and averaged in the 80’s for most of the season. That’s the sort of performances I think you’ll be seeing from Vince in 2014.

Many might see the Dees first 5 games and hope he’ll score well against some lower opposition players to begin the year and get on a roll. The Dees play St. Kilda, West Coast, GWS Giants, Carlton and GC in their first 5 weeks, only having to travel the once for their game against the GWS. His total average against those 5 teams was 80.16 last year.

Some good scores in the 90’s in there, but I can’t see the Dee’s putting huge 80+ beatings on teams like the Crows did against GWS and WC in Rd23. 8 Crows scored a ton in each of those GWS and WC games and Vince wasn’t one of them either time. In the GWS game, which Bernie hit a season high 26 disposals, the Crows had a staggering 435 disposals, 115 more than GWS and 68 more than their yearly average.

He’ll be a top 15 player for the Dee’s most days, but will only hit the top 5 BOG heights a couple times a year, which are not the type of performances we’ll be looking for next year.

Is anyone out there willing to roll the dice on Bernie in Supercoach 2014?

No chance in hell

Couldn't have said it better for mine!

Just no upside there for me to consider him in Mad Mick's Mayhem in 2014, which is looking like a tricky year to select a starting team.

Yea, i'm not seeing any potential upside on him either, Mick. I may be looking at a guy around his price, but i'd rather take a punt on a younger kid like Gaff, Rich or Crouch.

Agree – great analysis Bazza. Tell you what thought I cant help but feel that there could be some real value here under a man like Roos. No stuffing around, keeps his cattle happy…. who knows?

I had a feeling a few may be having the same thoughts, Jock. That's why I decided to do this on Bernie Vince first up. I reckon Bernie's knees are going to prevent him from ever getting back up to those heights he promised in 2009.

We did see a "Regenokine" inspired resurgence from Adam Cooney who has the same knee issues as Vince, but he hasn't gone and had any of that blood spinning magic done on his knees either.

Hi Guys,
BV is a maybe? me thinks, Why?
Mid feild team around im is very young…Who they gonna call? BV . Last years stuff was last years stats for the Crows Not the MIGHTY,MIGHTY Demons…Ya!.. No!.. I can't even sell this to meself.
NO not for me ..

Dools, I can always count on you for a well thought out and informed opinion. So when I saw that you were thinking about Vince I thought for a second that one of us had gone bonkers!

Vince is a no for mine, but his move to the Dees along with Cross may help Jonesy take the next step to average 100.

Waiting in line for brunch? 😒

In a digital queue for concert tickets? 🙄

On hold to Qantas trying to book your next holiday? 😬

Pass the time with ease by creating your #BBL11 #SuperCoach team! 🥳

Just head to http://supercoach.com.au and start building your side. 😀

Got five minutes?
Head to http://supercoach.com.au and enter KFC #SuperCoach BBL team today. Join the JR BBL Group. Take on @DamoSC and @azzajewell in your league.

Tell you how I would celebrate a #wbbl07 win?

Get over to http://SuperCoach.com.au and register your #SuperCoach BBL team while you're at it!

Don’t miss out on the ultimate Supercoach BBL group, join ours today! GROUP CODE: 848202 Haven’t signed up yet? You can do it here: https://supercoach.com.au/ Drop your own league codes below and don’t forget to Read more… With the draft getting underway on Wednesday night, it’s become a JR tradition to have a phantom draft with resident draft enthusiasts, Azza, Patch and Damo. We had divided the selections up with each of Read more… Having troubles deciding between two players? Or a combination of players? I’ve run my eye over some of the community’s current dilemmas for the upcoming BBL season. Have anymore? Feel free to comment below or Read more…