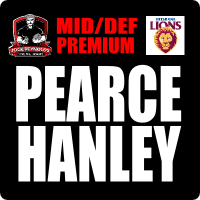 You might be surprised to learn that it took me a while to learn this great game.

I’m talking 11 footy seasons from the time I first handled the pill as a 2 year old till I won my first senior premiership with the Karingal Bulls.

This kid from the little dairy town called Ballaghaderreen in Ireland’s County Mayo is fair dinkum. And I’m telling you right now that we haven’t seen the best of what he has to offer.

We saw The Irish Bull come out at the beginning of 2013 and go nuts. By round 10 he was averaging 112 Supercoach points and those that selected him were sitting pretty. By then however the degree to which this bloke can rip shreds off a team was out in the open. Brent Macaffer gave Pearce his first dose of the heavy tag. The effects were devastating.

He would go on to average just 67 Supercoach points between rounds 10 and 14. But do you reckon this gun would have gotten this far in AFL Footy this quickly if he was the kind of bloke to shut up shop when things got tough? Pigs arse. He did what he does best.

He learnt quickly. He worked hard. He again emerged like a bloody lotus flower.

He would go on to average 95 between rounds 16 and 23 despite playing just half a game against GWS and despite copping hard tags from the likes of Taylor Hunt, Daniel Cross, and Taylor Hine.

2014 Predicted Status: Premium
Predicted Average 2014: 98-108 SC
Selection Status: Will be very close to being selected as a defender in JR Brumby FC 2014

I believe this individual is something special. A competitive animal who time and time again demonstrates an incredible ability to learn, adapt, and grow. Have never seen anyone take to the game so naturally.

He will have consolidated what he learnt about the hard tag during the preseason and will emerge a very hard man to stop in 2014.

Now Barron Von Crow has him penciled in as a lock which is fair enough. Read his recent look at the Brisbane Lions fantasy relevant players here. But the only thing stopping Jock Reynolds from calling lock on this bloke is the fact that we have plenty of premiums available down back this season. But my word he will go close.

he’s 115% locked into my backline. great writeup too mate

Yeah a lock for me too along with Walker as D1 and D2 in Addicts Anonymous FC.

Jock good to see you on the Celtic Tiger.
Like you I'm ridged in the pants with this blokes potential. I do not think that last year was it. I think he will get even better this 2014 season barring injury! but the coin, the coin will be a killer this year.
I need to find a link for the position changes to study more.

I think he has at least three seasons worth of improvement left in him before father time kicks in and he finds the other end of the bell curve. I dont mind his pricing… I'd say he's a 60/40 to be in my starting team

How many premiun defenders will you start with? 3 or 4? Liking a Bartel/Danger/Mitchell swing set at the minute, with Scotty Thompson thrown in.

The guy is a gun. Was close to lock just as DEF last year, now with DEF/MID is an absolute lock.

2014 will be a great year for DEF line. After the heartache throughout 2013, the knowledge that swing players like Hanley, Bartel, Mitchell and Hodge will be available flips this line almost to a set and forget.

Yeah, even with Brisbane's rough start I think Hanley will come out strong. Not a definite lock right now but penciled in as a starter so far. Def is filled with many treasures this year.

I had Hanley in my DT & SC sides all last season & he preformed well. I will be locking him in this season TOO!!

He is the biggest flat track bully in history, and brisbane have a very very difficult draw.

Although hes an exciting player on the up, I'm gonna have to say a big NO.

Getting less and less certain about picking Pearce. Averaged 79 when tagged and just 86 after round 8. Would be happier with Mitchell, Hodge/Bartel, McVeigh and Dave Swallow as my 4 non rookie defenders.

In marketing what you’re trying to do is to headache doctor combine traditional direct marketing with today’s
technology to create promotional tools that can make the customer feel pleased for such personal attention.

Simply desire to say your article is as amazing. The clearness to your put up is just cool and that i could assume you are a

professional in this subject. Fine with your permission let me to grab your feed

to stay up to date with impending post. Thanks

one million and please keep up the gratifying work.

I’ve been exploring for a bit for any high-quality articles or blog posts on this sort
of house . Exploring in Yahoo I finally stumbled upon this website.

Studying this information So i’m happy to express that I’ve a very
good uncanny feeling I discovered just what I needed.
I so much definitely will make sure to do not disregard this site and give it a look regularly.

Tends to make both the partners to prepare created for the sexual and can assist considerably within creating the
actual sensation. Foreplay is not merely touching as well as getting.
That is certainly another thing more than this. It must cover many methods from
just what ladies likes. Just about any the way in which caressing as well as obtaining usually are
remarkably loved, nevertheless never ever constraint the idea combined with old standbys.
You must go beyond the traditional to raise danger for females
in various age groups aroused. The ultimate way to get measures to spice up foreplay may be to examine porn video
and sex videos collectively.

You could definitely see your enthusiasm within the article you write.
The arena hopes for more passionate writers
such as you who aren’t afraid to mention how they
believe. Always follow your heart.

Asking questions are genuinely pleasant thing if you
are not understanding anything completely, but this piece
of writing gives fastidious understanding even.

For a wonderful response please have a look at this amazing site; natural male enhancement foods

Zak Evans taking wickets with a -67 BE! #SuperCoach #bbl10

The captain we all deserve #supercoach