Pick the order of this week’s AFL Draft 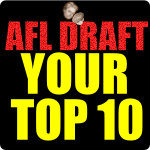 What an exciting week for the kids this week is.

I’ve nursed many of the AFL Draft School of 2013 through the ranks. Shared their victories. Helped them learn from defeat. Its hard for and old fool like me to believe that some of these kids will play league footy in 2014. And that’s what they are. Kids.

Nature has a funny way of turning boys into men. And just as bum fluff emerges from the upper lip of these young kids, so to will a fresh crop of gladiators emerge. I wish each and every one of you – and you know who you are – the very best of luck on Thursday. Please remember the bungalow door is always open.

Here is how I see the top 10 draft picks unfolding on Thursday. I want you all to have a crack at it yourself in the comments below – if you can pick the top 10 in the right order you will be summonsed to drink with Higgo, Crouching, Micky, Crimmo, Vince and I in the Jock Reynolds Fantasy Footy Community Banquet hall early in 2014.

Before I get stuck in – big news – we will be back with the Jock Reynolds podcast this Sunday night. You’ll notice a red tab thing over to the right of this internet based web page, make sure you hit that and send us in your questions for this weekend’s podcast. We’d love to feature some of you on this our first show for the 2014 Supercoach and/or AFL Fantasy season. Don’t be bloody shy – life’s too short for that rubbish. Just hit the button because we’d love to hear from you..

Here is how I see the Draft unfolding this Thursday:

There’s how this old bastard sees it – how about you? Pick the order and we’ll be drinking beer (or soft drink if you’re just a colt) together early in 2014;

I've got no idea Jock, so I'll just follow your wise words

Good to hear the Podcast will be back guys, I look forward to hearing some early fantasy football advise to help shape my 2014 team.

Nice list Jock, I tell you what, you'd be doing a couch jump if you guys draft James Aish. He will be a deadset gun, and make an excellent start to your rebuild project.

Lock in the first two GWS as easy picks

St. Kilda Pick #3 – Jack Billings. I think they should take Aish or Scharenberg, who i'm bloody high as a hot air balloon for, but they'll still get a great player in Billings.

Western Bulldogs Pick #4 – James Aish. Ignore the stuff about him not being able to handle a tag. He's 18 years old, he'll learn to deal with pressure of AFL football. Add him to a midfield of Boyd, Griffen, Cooney and the young dogs Liberatore and Wallis and that's starting to shape up nicely.

Gold Coast Pick #5 – Everyone seems deadset on the Suns picking Kade Kolodjashnij, so who am I to argue?

Collingwood Pick #6 – Matt Scharenberg. Could be James Aish if he's not selected by the Bulldogs, but most likely Matt Scharenberg. He'll be a great pickup for them and will slot into the vacated Heath Shaw spot, without the temper tantrums. I'll hate Collingwood so much in this draft if they score Aish and Scharenberg though.

Brisbane Pick #7 – Marcus Bontempelli. Could be Cameron McCarthy as the Jonno Brown replacement if Bontempelli is picked before 7, but this looks like a good pick to me.

Melbourne Pick #9 – Nathan Freeman. Agree with you on this pick, Jock. Melbourne recruited Bernie Vince from the Crows, who'll provide some help, but they'll still need some more bodies in the midfield.

Collingwood Pick #10 – Cameron McCarthy. I know the Pies recruited Jesse White to play alongside Cloke, but he's a bit of an also ran to me and will constantly tantalize the tastebuds with a good game every month, but provide duds the rest of the time. But this will at least allow McCarthy to spend the year in the VFL with White and Lynch ahead of him and be ready to take over the spot when he's good to go.

Gday there Marc always a pleasure to read your contributions. The knock on Aish not handling a tag is a shocker. It should add to his value in my view. If a 16 year old kid needs to be tagged in any senior football game let alone in the SANFL there is something special there

Absolutely, Jock. Norwood had some talent in their midfield too, so it's not like the opposition only had 1 guy to target. He played senior football for the Redlegs at 16, and Nathan Bassett certainly isn't the type to gift games to people, he played him because he deserved it.

If i'm Collingwood and he slides down to #10, i'd be on my knees thanking the football gods that I just scored a dead set gun midfielder.

Been hearing Aish will be a slider coz he’s a die hard SA boy and will likely request a trade home at some stage. However this is unlikely to happen at Collingwood, being such a big club and especially with Grundy, Kennedy and Broomhead all being SA lads too, along with Scharenberg. The pies would be massive winners if that we’re he case.

Could GWS swap the order of their picks? Take Kelly at 1 and Boyd at 2?

That would remove the pressure of being a number 1 draft pick off Boyd's shoulders.

Of course Jock; it works both ways.

A number 1 pick could feel emboldened by the club's faith or crushed by the weight of expectation being picked first.

We'll have to see how young Boyd takes it, in the likely scenario that he goes at #1.

Pies 1st Pick (Pick 6) – “Player X”
We had Player X in the 2-4 bracket so we’re absolutely thrilled to be able to land him with pick 6. Player X is a game changer, an elite in and under player who thrives in traffic and has an exceptional footy brain and a huge tank. With a Scott Pendlebury like composure the game slows when Player X has the ball and he is in our view the best spot kicker under pressure in this year’s draft. He is also surprisingly strong overhead for his size and deceptively tall.

While a bit raw and with a light frame the club is taking a long term view with Player X and considers him a future leader and 200+ game player. It is not beyond expectations however that Player X could push for regular selection in 2014 through his professionalism, organisation and unwavering endeavour.

[Optional caption for photo: Derek Hine almost stumbles over his words in his rush to get Player Y’s name called after Melbourne choose Player Z at Pick 9]

“We couldn’t believe our luck when Player Y was still available at 10. We initially had him earmarked with our first pick at 6 so to see him slide to 10 and for us to get both him and Player X in this draft is the perfect outcome for the Collingwood Football Club.

In Player Y we have an extremely quick big game player who is a silky intercept/outside (choose one) onballer with a booming right/left (choose one) foot who regularly rebounds opposition attacks/finds the goals (choose one or both). If not for reoccurring foot/hamstring/back (choose one) injuries over the past 12/18 months (choose one) Player Y would have been a likely top 2 pick so we’re very excited with the enormous upside that some regular football will bring to his game.
———————-
I’m excited already!!!
Go pies

Jock
Author
Reply to  The Noz

Quality Noz – always seems to pan out that way with the bloody Pies!

No chance of Lennon #2. Could possibly go to Tiges at #12. Also can't see Aish falling that far down.

Draft Day –
late bloomers and perennials
on the mantelpiece

Moving Haiku. Just read your post and needed to go for a slow walk around the block to unpack things. Moving.

Gday there Jordan – very strong mail – and keep this to yourself – that Luke McDonald MIGHT actually end up at North. Horses Mouth.

Anyone you have your eye on as potential starters in JR Brumby FC during this pre-season jock?

Gday jock, love hearing ya insides mate. just wondering how the donners league works and how we get in it!

Gone down for the first time in a while, think my team performs better when zorko plays. At this stage I can get 18 if two rookies pop up #SuperCoach

Bont is VC Who gets the captain? (assuming i don’t take Bonts score)
#Supercoach

@ItsTheRainman Or I can this #supercoach

What about these trades without Bont? #supercoach

Hello everyone and welcome to another week of Around the Grounds. We’re now on our final week of bye rounds, thank the good lord this is almost over, though Round 14 is going to be Read more…

Are 4 Trades Enough This Week?

Lekdog and Patch are back to talk about all the players we should be targeting for Round 14, trade reversing, Duke Newcombe, Ned Reeves and sing about Aaron Hall. Grab some Jock Reynolds winter merch Read more…

Apologies to all who wanted to panic this morning, I’ve been locked in a room panicking myself silly with the prospect of fielding 10 players next week. I should’ve known we panic together, and I Read more…