POLL: Which forward would you put your money on? 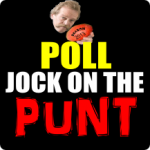 Gday folks! Sportsbet has released some AFL Supercoach markets which is exciting for a fantasy football genius such as myself.

I can tell you that they will go pale as a bloody ghost when they realise that old Jock is lurking around the markets ready to slap some hard earned on the line. Should be like shootin fish in a barrel.

First a quick word. Make no mistake… having a little wager can be a little bit of fun if you spend some of your spare change on a hit and giggle but for god’s sake… don’t make it a regular habit. And of course this kind of business is strictly for over 18’s only.

I wanted to run the forward line market by you lot. It’s pretty simple – you bet on the player who you reckon will score the most Supercoach points during the regular season. Out of the following lads – who would you slap $10 on? Would you go conservative and slap it on the favourite Buddy Franklin… or go a bit smokey on someone like Zorko the Magnificent at longer odds?

Cast your vote then let us know in the comments what your thought process is:

You would think so m8. I know he's had an interrupted pre-season and he's no certainty to play rnd 1, but he's had a enough years in the system now and his footy brain is catching up with his raw talent. You'd think he's in for a massive year if he can stay fit, so my money would be on Nic Nat.

Buddy might have one up on Nic Nat for most accumulated points this year…I'd expect Buddy to play every game bar one or two, but you think Nic Nat would do the same? Might see a few rests here and there after he returns, what you think?

because they were rested forward is a joke

Suck it up mate

Jock, or anyone else, is K.Stevens a decent option to start in the middle? As my M6 or 7

j. gillard may be a better option but she'll only be avail for finals.

She will be worn out by then mate, maybe if its really muddy her low centre of gravity maybe useful…

Absolutely he is, and I'm considering him as well. He's hard as nails and tackles like a mad man…the kind of player that McCartney loves. He's versatile and knows how to find the footy. It's my feeling that he will get plenty of game time in 2013.

What about Pav? He is a lock for me.

LOL he's not a lock at all. Way better options than Pav….

Stay away from Franklin, I'm good at reading players. His fall from the top will be nothing short of spectacular. He will have the worst season of his career this year, mark my words

Is A.Swalllow a good smokie prospect!?

Is dean cox a LOCK? Jock

Congrats Jock if Sportsbet have come on as a sponsor. 🙂 Great for the page.

There is only one question about this market. Where is Pav? The highest sc scorer in fwds last year and he is not in the listed market? C'mon Sportsbet really?

My next thought is based on that market if buddy plays all games or at least 20 he wins hands down. IF he doesn't then Rocky seems set as he is durable, capable and been a great scorer in 2011.
Punting wise betting on short priced long term bets like this is a poor option. You are betting about whether a player avoids injury and based on that it's a mess of unpredictability and that is not what good punting is all about.
Higgo could run the percentage odds for us. Oh OK I will. Based on the odds provided :

So its a soft market. Hawkins should be 15-1 and Stevie J should be 12 to one and that would be a bit better. would drop it about 10% but a betting market needs to be set around 112% for a punter to be enjoying suitable odds. As well as have the previous years highest scorer in there. :-X

I reckon the market is soft because Sportsbet are just having a feel for it. Its he first time they have done fantasy betting and their odds suggest they are a little nervous going into new territory.

Fantastic insights BIG. Like Mick the Mad reckons I think they are dipping a bit of a toe in the water.

Jock this is a bit of fun all right.

That leaves Zorko and Rockcliff as the two on that list that would be worth a punt but wouldn't be sold !!

Dean Cox would have to be a better option than those two though – no price for him ??
My smokie would be Dustin Martin – what offer the best odds if he isn't on that list he must be paying $12-$15

So that'd mean your idea of the missing games would definitely come into account, Good thinking there.

I believe this is a 'group' type market, where you are trying to predict the highest total score out of the listed players only, not the entire field of forwards.

In some markets they have an 'Any Other' option which would include all other forwards (they typically do this for AFL Most Goals and racing Jockey Challenge markets), but not so in this case. If they did, it would be pretty short given players live Pav, Nic Nat, Cox, Martlin, etc. aren't listed.

Hello Community! This is it, it’s the final countdown! IT IS GRAND FINAL WEEK! I’m not sure about you, but I am aroused. If I was a member of Europe, the band featuring men with Read more…

Chicko’s Check In – The Great Beat Down!

Community! How did you go? Did you beat down your opponent with nous, skill and insight? Or did you pull one from your nether regions and ride the wave of good fortune and avoided the Read more…

G’day Community! It is here! The finals are finally here! For some coaches, it is your chance at greatness. Who will step up to the plate? Will you step up? I IMPLORE YOU – take Read more…