We’ve had a good had look at the lay of the land in AFL Fantasy Footy in 2013… and I can tell you that the mid priced player will make or break your team this season folks.

There are some sensational mid priced options available to us this year… and here they are in one handy easy to digest document in the PDF. That’s Printable Document Format for those less computer literate as I have become.

Enjoy… and please let us know your thoughts.. have I missed any specials?

More resources to help you get your team together:

You're killing me, Jock. I think I have my team set, I say to myself "Marc, you've identified your targets, locked 'em in, you're ready to roll". Then I come onto the site and I see the other people posting their teams and you bringing out your cheat sheets and I see names like Atley, Maloney and Sipposs, names I didn't even consider before and it's making me re-think everything all over again.

yes….MR you are so right…….here I was thinking about mundy and shuey and then mmmooollllllooooonnnneyyyy. where did that come from.

jock I was happy.

Don't mind Josh Jenkins ADEL, (DPP ) {around $360K in SC} as a good mid price option…seems likely to get a go in the ruck as well as up fwd this yr. had a good entry last year and has taken his time to come good through Essendon and now the crows but good start last year.

I'm very high on Jenkins ATM. I think he has the talent to kick 35-40 goals for the year as Tex Walkers partner in crime up forward. Should fill in for Tippett OK. Not as good a ruckman as Tips (McKernan is the best backup ruck choice Adelaide has now), but he has pace, a good kick, can take a pack mark and has much more natural football instincts than Tippett. I have him down as 75SC points a game, he may be a bit inconsistent, but I think he can fill in OK until you can upgrade him to a premium.

I like the look of Brodie martin and greg broughton down forward?
Thoughts?

Good read, Jock. Koby Stevens & Nick Lower are on my midfield price list – and of course, the Fyfe. I reckon Josh J Kennedy is a good forward line pick up too.

good to have us on our toes.

No room for Brandon Ellis Jock???? Running machine good kid I think you will find him steaming off half back might even push into the midfield.

I'm interested in Caddy but I think we need to see evidence other that impressing on the training track. He played all 22 last year and only averaged 15 disposals a game and was ranked 8th for contested ball. Not good enough!

But, a change club and coming home could make all the difference.

What about Ben Jacobs? (def – 309k) Port rated him and didn't want to let him go. Read an article recently that he was fit again. Be interesting to see how north play him.

Flirting with the idea of Libba as well (mid – 444k) Third year in the system, bumped his average up by 18.3 last year to 83.1. Scores more in SC than DT. The mid price midfielder is pretty well stocked this year, could be a decent POD though if he has a breakout season

And if you're really ballsy, Tom Bellchambers….
Hirdy reckons he could be number one ruck. http://www.afl.com.au/news/2013-01-25/don-firms-a…

MRB37 I like Jenkins more then mckernan, mckernan is useless as myself a crows supporter and it is frustrating to watch how many frees he gives away.

I reckon McKernan has more natural football skills than Jenkins, but it's what's between his ears that's his downfall. Jenkins you can tell really wants to be there, really play well and help his teammates, while McKernan has that poor body language where he appears to just be going through the motions. There was an article about the pair a week or so ago that was an interesting read.

He also finished the season as the Crows first option if Tippett was not available after McKernan was sidelined with a broken jaw. So on the surface he looks to have his nose in front.

But McKernan also has his real strengths.

He is a better pack mark and a better ruckman – averaging 7.7 hitouts to Jenkins' 5.5 – so if the Crows are confident Taylor Walker and Co can kick a winning score and they're more concerned about having someone to ease the load on Sam Jacobs, McKernan might just be the answer.

The key for McKernan will be to stop giving away so many free kicks – his career count is 18 for, 42 against – and to improve his consistency.

That not only applies to AFL level, but also if his season begins in the SANFL with South Adelaide, where his performances have ranged from outstanding to head scratching in recent seasons."

Thanks Jock that was really helpful, all i needed was a few mid priced players in my team and this cheat sheet did the trick. Hadn't given to much thought into Moloney up until now.

Gus Monfries! This guy is a deadset no brainer to have as your F4/5 & then look to trade out at round 5-7 having scored you an ave of 95+pts and making you an easy $125k.

1) he is at mid $300’s, & a DPP as mid/fwd and by all accounts set for a midfield role at Port after being stuck as a small fwd at the bombers.

2) Ports start to the season, they play Melb, GWS & GCS in the first four weeks (and GWS again in Rnd 12 if you wait that long) at which point you can upgrade him.

High points early & bonus cash, and then trade up to Buddy or another elite fwd.

Yeah agree Simon, for me F5 role thinking either Monfries and Christensen at the moment.

Thought long and hard about it but I am going to pass on Atley and Moloney at this stage.

I think Tuohey or even Laidler are much better options than Jordan Russell. Russell couldn't get a game in a team that the other two are integral to, plus Russell is $30K more expensive!
Tuohey continues to improve, he's now a better kick than 80% of players in the AFL, he's built like a Wombat and has the same deceptive pace, plus he dominated all of the Aussies in the most recent international rules.
So, why don't you like him Jock? Is it a Scots v Irish thing or were you trying to keep him secret as your POD?

Hello Community, welcome back to another cheat sheet before a Thursday night game. It’s the second week of the byes which means we have a crop of players to choose who have completed their byes Read more…

Morning Community. The bye rounds are upon us … my least favourite time of the SC season, in particular the first bye round. I struggle to find advice for you because I’m either recommending someone Read more… 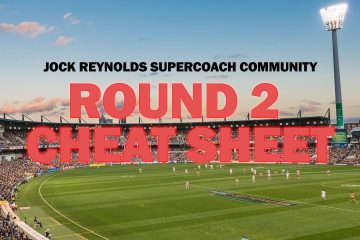 Hi JR community, I’m back with another cheat sheet. I had a pretty terrible week in terms of Supercoach last week … I captained Steele, also had Crisp, Whitfield and NicNat so sacrificed a good Read more…