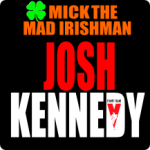 Last season was a truly special one for Josh Kennedy.

He excelled in a resurgent Swan’s outfit that went on to win the flag in a Grand Final against the very club that let him go only three years before.  His consistently high level of performance had him as an early Brownlow favourite. And although he ended up coming eighth with 19 votes he did end up taking out Sydney’s Best and Fairest with a record total of 877 votes.

Looking at his stats he averaged 12.3 kicks, 16 handballs, 1.2 goals and 5 tackles a game. Although his disposal average isn’t anywhere near as high as other Super Elites like Gary Ablett and Dane Swan, it’s the specific type of disposal that has seen Kennedy shoot up the Supercoach ladder. He was ranked number one in Contested Possessions per game and number one in Clearances per game. Both Supercoach gold for points scoring. Add this to his high tackle count of 5 per game and his ability to kick goals from the midfield and you can quickly see where his point accumulation has come from and why he has finished with Super Elite status.

The one aspect of his game that did let him down was in the clanger department where he finished 7th overall in the competition. Although when you’re leading the competition in contested possessions you can expect a lot of possessions to be rushed while under pressure and the negative points are counter acted by the hard ball gets in the first place.  So let’s have a quick recap of his scoring in 2012. So was 2012 a flash in the pan or are we about to see another player join the cast of must have Super Elite players ? Well even though Josh had a massive average points increase from 2011 it isn’t all that dissimilar to the jumps experienced by the current crop of consistent Super Elite Players. 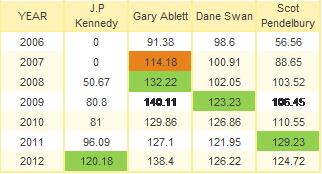 However not all those who break into the Super Elite Level go on to post the consistent super elite numbers of the table above. 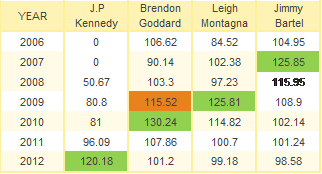 Well if you look at the table of the one year wonders you can see that both Jimmy Bartel and Leigh Montagna’s stats are very similar. Both were playing in teams at the height of their powers and their drop off in average coincided with a breakout by another teammate the following year, Gary Ablett at Geelong and Brendan Goddard at St Kilda. Both would have copped the heavy tag coming off their season’s best and both their averages dropped as a result. Goddard’s drop off is as simple as St Kilda peaked in 2010 and I’m sorry Jock their window for the flag closed along with a lot of their ageing squads Supercoach relevance. So which table do I expect to see Josh Kennedy in 2013??

I think we are about to see another name added to the must have Super Elite Table.

If you are somebody who likes having a point of difference I’d say Kennedy is your man. Will easily finish in the top 8 midfielders for 2013 and is a very sound M2 or M3 in your initial team.

Click here to read more cutting edge analysis from Mick the Mad Irishman. Pendlebury, Swan, Beams, Ablett and all the analysis on the super elite options in 2013

Spot on mate, Kennedy can’t be tagged. Locked and loaded.

I just can't find a place for him. Most people will have 3 uber premiums in the guts….maybe 4 if they go light on another line.

Thats 9 ubers and Kennedy is not in the top 3 and simply wont push the Gazza, Pendlebury and Cotchin trio out of my side.

Good Stuff Jim,
it's true you can't fit them all, so it just comes down to picking then ones you feel happy with. I personally have allocated 5 positions in my midfield to elite/super elite premiums so might have room for him at M3. Nothing in stone yet but it will be a very likely point of difference and I can't see him not been in the top 8 come the end of the year.

Having the weekly price increases in the table next to his averages gives you a grant idea of how over priced some players are at the start, ill pass and pick him up when he drops to 580-600g mid season.

I'd say 95% of elite/super elite players will drop in value during the year because it is very hard to keep their three week rolling average to starting price ratio constant all year. It only takes one bad score to throw their price off.

Evidently if Josh Kennedy had started last year at his price from this year he would have only dropped to $576,000 after round 15 and this would have been the cheapest you would have got him.

Mick me ol' china. this is th e enigma within in a riddle within a conundrum…Who is THE BEST VALUE for the coin?
I have looked at all the teams posted until last nite approx 11 PM and Jock has nailed it in the last publication . Agree totally with Jock However will he maintain the staus quo IMO YES
He has also made it to the KRAKENKATS along with GAJ , Dendleberry and dare I say it DELIDIO… with 1 more super…yes I expect to lose cash but these guys are LOCKs for the season.
Have not gone uber cheap in FWDS or BKS and I still have 100k in da bank for disastars It happened quite a bit last season..But thats the team for to-day it always changes but certain players are always value for $ and Kennedy is one

I was thinking of skipping Kennedy as a starting selection and then upgrading to him later, but your article made me go and look at the Swans fixture, and it's looking like there's some potential for some big scores to start the year. Swans first two games are against GWS and GC.

My initial team was to have 3 premium elites, 2 of which are occupied by Ablett and Pendlebury, so my 3rd is either going to be Selwood or Kennedy. Don't think I can go wrong with either at this stage.

Mick great work thanks for the run down. With 10 spots open in the mids you would think it would be a year to take a "chance" on guys like JP and the run in for him as MRB37 points out rightly is superb. With Swan & Cotchin starring in the preseason, & GAJ a cert for any thinking man it leaves only 1 spot for the likes of JP to start jostling with the likes of Pendles, Watson and lesser extent Beams and Dangermouse so he is right up there.
If he flies in the NAB he might get a spot in plenty of teams after that breakout last year, hard to see him slipping back. Great article thanks.

Gday there BIG.. tell you what mate.. with these extra spots I'm looking forward to coming up against teams with a bit more variation through the belly. I tend to think most will go with GAJ… then maybe Pendles as a 2nd super premium… with a big belly of your upper midpriced player like Shuey, Fyfe, Gaff, Mundy and the like.
Will be a bloody great year

who said super coach couldn't get any better! Cheers Jock!

I'm stoked Jock to hear your thoughts on your midfield as I am thinking similar, great minds think alike I say mate or something like that. I reckon Gazza, Pendles and maybe Cotchin with Fyfe, and midpricers rounded out with Viney and O'meara. Also reckon Ben Jacobs is worth watching, has had some insane injuries but is fit now and he was a ripper ball magnet before them. Smokey POD for the defence I say, anyway that's me for now, lovin your community Jock!

MRB37, I love selwood as a player but I see him as a risk in SC due to his record of getting concussed. I know any player can but he really as no regard for his body and always goes football first, body second. I have had him in the last two years and a late withdrawal last year (due to concussion) gave me a zero and a first quarter KO the year before gave me a really low score and the concussion made him miss the next week.. fool me once … yady yady yada

Hi All, I'm new to the "community" and am very much taking in all the experience and knowledge the collective possess. Like most I have my top two locked in and now it's all about M3. I was very happy JP last year but I'm now thinking there is better value with either Cotchin or Mr Danger as M3, which will give me scope for Murphy, Fyfe and Mundy. There are so many options it's like trying to pick a DVD!

Greg! Great to have you onboard mate – welcome to the team. Mate I reckon with the 8 midfield options this year it's even harder to nail the mids! Plenty of midpriced value around as well

Am very tempted to go the cheaper version of someone who could have a huge season from the Swannies, and thats Kieran Jack.. $600k, could be in for a massive season.