Smashed a few sneaky pots at the local this morning with old mate Des Dooley and he’s got me thinking about this kid as an AFL Fantasy option down back in 2013.

Pearce Hanley comes from a little dairy town called Ballaghaderreen in Ireland’s County Mayo. Rough as guts. You need to grow up bloody quickly in those parts to stand on your own two feet. Only the most determined break the shackles and make a real crack of themselves. This bloke has already achieved an incredible amount in his 24 years… but I’m beginning to feel that there is more than a few chapters left in this feel good story… 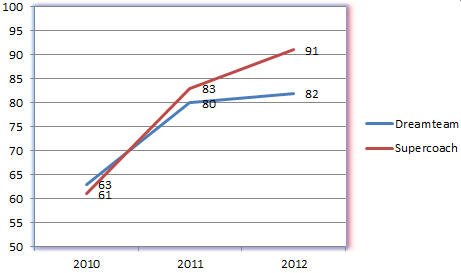 And so it is that at the request of my old mate Dools I’m posting this one at 11.10pm on a Wednesday night to keep this one on the down low. Having been in this caper for over 27 years a man learns to back his judgement… I see some Supercoach quality in the oven here kids…

Will have a real long hard think about slotting Pearce into my team this season… who else is with Dools and I?

Damn It Jock. LOCK
Not a word about the Duffman alright!
Cheeky bugger LOL

Broughton ahead of Hanley for me at this stage. $40K cheaper, proven performer, new club, DPP … However if Greg dosen't look happy Pearce is on my radar.

Bouugton is in anew team with a new job, does this translate to how he used to play b4 Ross the Boss. for me if he settles in well thats upograde stuff if however the gamble fails and he is required to fill a single role this season ..Wasted trade… No from me and I love the guy…Kitty Kat Kitty Kat where will you be?

thank Dools for us Jock me old mate and Hanley has heaps of upside to him. Love the stat on the under 60s.. but what the bejeeeeus is that all about? I took a peek: he had most of those low ones on the road, had 3 (2 against Eagles) at Patterson stadium so the trip west is unkind to him. The Hawks in Melb dealt him a blow too. But the 2 most concerning were the ones at the Gabba against Tigers and Carlton. (insert expletive) Worse stat still is all his good scores were against cellar dwellers (think GWS, Melb, Doggies, Gold Coast et el)….so even though I had him in 2012 on that info it's a no from me.

Gday there BIGSHOT! Great to have you onboard mate. Fantastic pick up on the trips away.. strange considering the bloke has packed up his swag and moved from ireland, youd reckon travel wouldnt bother the bloke…

definitely food for thought there. I reckon he'll begin to add consistence to his quiver this season

fangs Jock nice to post something in a blog I've read a lot of over the past couple of years. BTW the pods are dynamic. But can you ask Crouching to remove the digit? I wanna see him up top this 2013 season with bragging rights.

Had him from the start…a unique player indeed.

People often wonder when the time is to start looking at their Supercoach sides for the up-coming season. 2020 is just about here, but there is still so much of the pre-season to go it Read more…