I have nothing but the most sincere, complete and utter respect for James Bartel. There is a place set aside for him at the Jock Reynolds Fantasy Footy Community banquet hall.. and he can have the drumstick as far as I’m concerned.

Triple premiership player. Brownlow medalist. Norm Smith Medalist. All Australian. This bloke is a living, breathing, playing legend of our game. Just as importantly in my book is the fact that he is a nice bloke. Hasn’t gotten carried away. Could have pulled any manner of sheila but he’s kept it all under his hat.

I love him. And I’m not afraid to let that be known in all corners of this big arse brown land of ours.

But as I have often said this caper is not for the sentimental. It’s not for the soft of heart. It’s won by the ruthless and lost by the kindhearted. The cold and clinical get the bikkies. The warm and fuzzy get stuffed.

Jimmy Bartel will not start in my Supercoach or Dreamteam lineups in 2013. He’s days of fantasy supremacy are behind him.

The big news with Jimmy is that he’ll be available as both a forward and a mid in 2013. There are many locking him into their forward line, and I can see the thinking behind this. The bloke was very recently an ultra premium midfielder. Slot him into the forward line and happy days.. premium scoring up forward where the quality is thin on the ground. On the surface I’m happy with that.. but then I have a look at the stats: 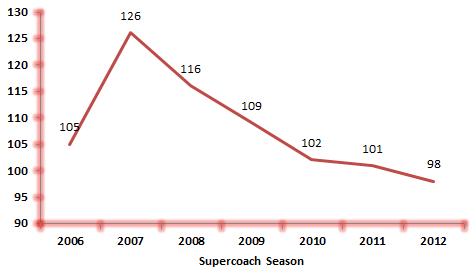 It doesn’t take a Rhodes bloody scholar to see whats happening here. Jim is on the slide. He looks likely to average around the 95 mark in Supercoach in 2013. If he’s good he might maintain his 98 or even nudge 100 again… if he slides a bit more he might finish low 90’s.

But Jock you old bastard.. that’s all good… after all he’s just a FWD and there’s not much scoring going on up there anyway you silly old fool! Yeah I thought the same kids.. but based on his 2012 season;

Now I stuff around a fair bit kids. I am a sentimental man at heart. But when it comes to Supercoach and Dreamteam you need to look at the facts. You need to look at trends. Jimmy Bartel is one of the best we’ve seen. But he’s trending down, he’s getting old and I wont be spending this kind of coin on a player who I do not believe will finish in the best forward lines at the end of the season.

Would love to hear your thoughts,

you velly smart man jock leynold…back home in thailand we hab saying…"when bar tell, you listen!" i tink i listen to your bar glaph, 2013 slope go down quicker than a bar girl in pattaya at songkran festival…no poblem na

G'day Jock, great article mate if the trends of supercouch continue.
I' am of the firm belief for this season, the more DPP and dare I say premiums what eva the position in DEF or in FWD line will be the stratagy to pursue this season.
To that end Moon Boot Jimmy Will Be In the Team come opening day If I can squeeze him in!

if not definate upgrade target but by then we will know if you is right and I is wrong.

Jimmy will probably be in my forward pocket or i will hope his price drops in the first 4 or 5 rounds and then i will get him. never write off champs

Great article jock, one of the best market layer peofiles so far this off season. Had him penciled in due to forward availability but due to the graph/age/how well he plays against hawks I might give him a miss. As much as it pains me though, I do believe the cats have drafted so well they may well be the team to beat again which will effect his output in the 07/08 kind of way. What do you think mate?

I'll be skipping this guy. I'm not as gung-ho on the MID/FWD players this year due to most of the quality ones having their dual eligibility taken away. Seem to have been replaced by the RUC/FWD combo's this year! I've heard through the grapevine that they'll be resting Bartel up forward more this year, which when added to his already declining stats makes me think he'll have another year of diminishing returns.

For around the same cost as Bartel, you could get yourself a MID/FWD like Dale Thomas/Dayne Zorko/Tommy Rockliff/Cyril Rioli, or if you want a RUC/FWD combo, pick Roughead or Ryder, or if you just want a superstar forward, grab the upcoming Coleman Medalist Taylor Walker. Plenty of potential for scoring at around the $500,000 – $550,000 mark for forwards that you shouldn't be looking at an aging star like Bartel.

@jock_reynolds You are the rhodes scholar of fantasy. This post is way too thought provoking. What I have to say is that, I have him locked into my team, his position is pending. I feel with the addition of Caddy he may be spending some more time in positions where he can really kick teams in the balls. i.e forward flank/wing. The bloke is a superstar, marks better than Tom Hawkins on Grand Final day. I do acknowledge a few of the negatives though. Statistics don't lie, nor does his age, but the man is all class and just too good to pass up in the forward line, considering I can swap him into the mid later in the year, or completely out once I have milked my cash cows….

Hmmmm, the decisions one has to make.

Online libraries and study resources are way for students to solve their educational problems. My service green essay is best for such students.