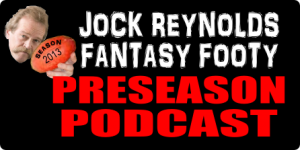 Many an AFL premiership is won based upon a foundation of strength in the back half.

The same could be said about Supercoach and Dreamteam defence. It is bloody critical that you set yourself up with a solid backline before you launch your assault on the AFL Supercoach and/or Dreamteam titles for 2013.

In this week’s podcast we discuss some players who should be on your radar for season 2013;

Enjoy the show folks! You might hear mentioned in the show that Crouching One and Wayno have had a video released… catch it here and look out for the next in the series soon.

Which defender will you have your eye on next season kids?

Great podcast as always guys. Been looking at the fanplanner thing on fanfooty, and I've come up with this side. What are your thoughts?

G'day there Weavesy… Looks like one hell of a decent first attempt. Only question marks I have early doors are Heppell and Rockliff in the guts?

Yeah mate, figured flexibility will be king come the bye rounds. But seeing as its top 18 scorers in the SC13 byes I might abandon that theory.

Yeah understood mate. I'm thinking of going in with one hell of a heavy midfield this season – light on the fwds and defs… seriously great first team though mate

Sounds like you've got a solid plan there mate. Cheers mate, plenty of time to tinker so ya never know might come out of this with a top 100 side (I hope).

Weaves, starting early I see 😀 just like myself .. one thing to be said there is no chance the team you just posted will be the one that starts the season. There is just so much time before it kicks off and there are too many variables in between, with some rookies not playing, rookies coming from nowhere to get a game, smokies hitting NAB Cup form. Team looks ok mate but I just couldn't give any justifiable feedback at this point in time.
What I have been doing in the off season is trying to come up with a strategy for where I want to lock my premiums and I have been analysing the early season draw to unsure my team will come out of my season firing.
So far I am looking at loading my midfield from the start with 6 or even 7 premiums. This is where the points are at. Where as a premiership is won based upon a foundation of strength in the back half I disagree that the same applies for SC. I have been analysing the top 10defenders from last year and with the exception of Delidio (who is no longer a defender) all dropped over $100,000 in price or didn't play all the season. I think I will go in light in defence this year, bide my time and pick off the good ones as they become affordable. I'm sure Higgo will do the maths on this later but I doubt any defender will be in the top 30 in his standard deviation worksheet. I'll be spending my money on players with the best standard deviation and give me value for money from the start.

Outstanding as always MJ. I will be posting a few pre-Christmas articles that will add further weight to your fine SC logic.
Wondering if Jock would have logic enough to get you writing regular articles for the community? Hmmm.

Higgo… That's a bloody corker of an idea…. MJ?

Jock, sorry didn't see this one earlier. You should have my email so if your keen drop me a line and give me an idea of what type of articles you'd be interested in. If I feel like I'm up to the task, I'll mail you back something by the weekend. If it works all well and good, if not no stress

Thanks Higgo, I learn from the best mate. Looking forward to seeing those articles and hearing your whipping up another SC Team Analyser is great news. Look if the if the great man Jock Reynolds came a knocking i'd find it very hard to say no ..

Very keen in the idea of loading up in the guts mate… That is where the engine points scoring room is. I went with a similar tack in the fwd line last season re: sitting back and picking off the cream later on.. Worked a charm

P.S at work and haven't listened to the pod cast yet, but can't wait to get home tonight and have a listen. Keep up the good work men 😀

You're a good man mate…. Appreciate the support and contribution

Yep I've been tinkering on Fan Planner as well.

Solid looking team there Weaves. Wines and Mitchell could be very handy rookies. Watch to see if Colquhoun gets picked up this week in the pre-season draft.

Will defer to more experienced experts but I like the look of it – Suckling was good for me last year and if the Bombers improve Heppell will be a large part of their success.

Glad to hear so much time put into defenders, since it's the area i'm having the most difficulties with. Gibbs is looking like my only lock so far, and i've got Broughton beeping on my radar. Hartlett is a talent, but those injuries scare me off (Seasons of 11, 4, 15 and 16 games). Bock would normally be a "No", but for $265,000, he's someone to seriously consider. Could be an ideal guy to mark down as your first upgrade for the year, and since he's a DEF/FWD, if you pick your team right and can swap him around that means you can choose a DEF or a FWD as your first upgrade, so you can pick the best guy available from two positions instead of one. From a quick run through, my DEF would shape up as the following if I were to pick today

Broughton is still a maybe and Luke Brown's selection is based on potential pre-season form and if he's picked to be Doughty's replacement, which is what he was recruited for. Other cheap Crowies i'm looking at for that final spot occupied by Pedersen or for the bench are Luke Thompson (showed some good stuff in the finals) and Shaun McKernan (could blow up if he gets picked as the Tippett replacement).

Gday MR.. Great to see your scone in the comments area mate! I've already spent a lot of time thinking about Broughton. I'll be very interested to see how he settles in on the Gold Coast. Shouldn't undersell how he fits into the lifestyle as a factor that will manifest itself on the footy field… Concerned

I might be a bit weary of Sam Jacobs this year. Crows know they overworked him last year, and with Tippett gone there's no one else in the Crows 22 who can give quality minutes in the ruck while Jacobs takes a rest up forward for a bit (Jenkins is tall enough, but his ruck work is average at best, McKernan is better, but a bit undersized). I can imagine them giving him a couple of games off near the end of the year (They play Bulldogs and Melbourne in Rd 21 and 22, look like prime resting material to me) so he'll be fresh for Finals.

It'll also give Angus Graham a chance to go out in a Crows jumper and hopefully reverse the emerging trend of Adelaide players going to Richmond and playing really well (Ivan Maric) and Richmond players coming to Adelaide and playing even worse (Richard Tambling). I swear if Chris Knights tears it up for Richmond and Graham is even worse I'll go down to West Lakes and bar them from ever letting a player who's ever played for Richmond put on a Crows guernsey. PODCAST | It’s time to plan for the byes

Lekdog Damo & Patch sit down to discuss trading for the bye-rounds, Jack Macrae and a bunch of attractive rookie options. They also fight about all of Lek’s suggestions…time codes below. Get 20% OFF + Read more… PODCAST | What the RUCK do we do with Grundy?

Lekdog, Damo & Patch sit down to discuss the latest #supercoach news including some Grundy talk at the top off the pod! Time Codes: 00:00 – Grundy news and replacements08:06 – Round 6 Positives11:13 – Read more…